Or try my hand in a marching band while I play on my kazoo, and there won’t be trouble in the world no more.- Mindy Gledhill, “Trouble No More” 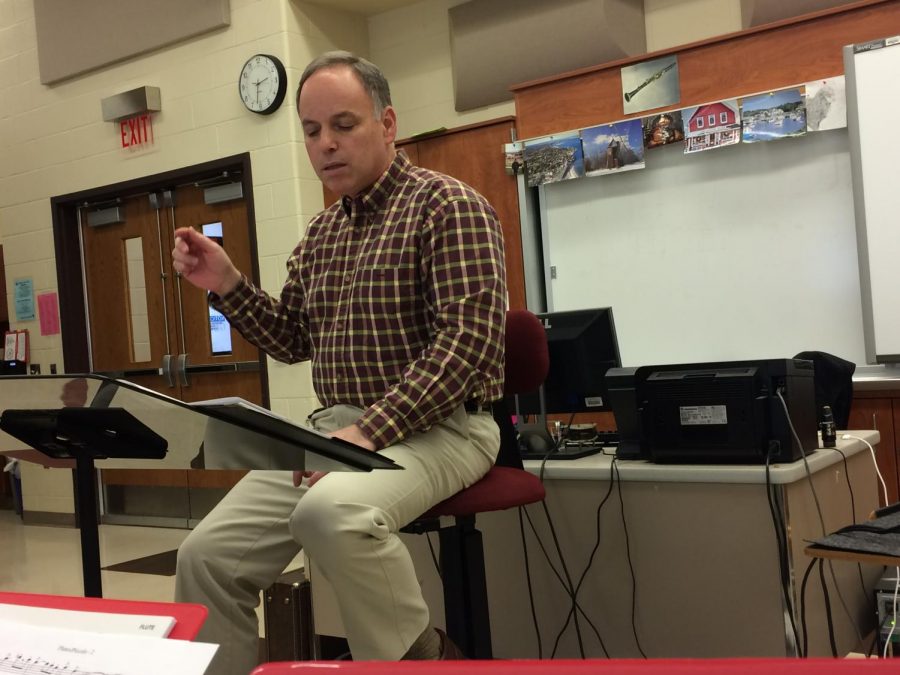 Mr. Kurland conducts the tenor and baritone saxes in “Flourish for Winds” during class. Kurland chose to play “Flourish for Winds” in the 2018 Spring Concert because it is in 6/8, and there is interesting percussion. He listened to the recording of the song and thought it sounded cool. Photo credit: Julia Piermatteo

Who knew a simple visit from the Glen Rock High School Jazz Band would influence a third grade boy so much?

Jeffrey Kurland attended Richard E. Byrd School and decided to pick up an instrument after the jazz band paid a visit.

Kurland attended Glen Rock High School and now instructs the marching, concert, and jazz bands. He plays the flute, saxophone, trumpet, and all the rest of the band instruments. His primary and favorite, is the clarinet, which he has been playing since the fourth grade. His dad listened to big bands from the 1940s, but Kurland prefers “70s light rock.” The first record albums he ever got were by the Beatles, which he listened to on his “little portable record player.” Musical scores are his favorite to play because they’re fun, especially when he is playing several instruments.

He decided to become a music teacher because he had a knack for music. While student teaching during his senior year of college, he realized how much he loved teaching music to others.

Kurland’s musical influences play a role in the pieces he chooses for the GRHS band. It is music that “stands the test of time.” The marching band flip-folders are filled with songs from the 60s, 70s, and 80s, such as “Rock and Roll” by Led Zeppelin and “25 or 6 to 4” by Chicago. People still listen to this music. For this year’s spring concert, Kurland has chosen “Mountain of the Sun,” “Our Heritage,” and “Flourish for Winds,” just to name a few. He also chose a Led Zeppelin medley because people are familiar with that band and still listen to their music. He chose “Our Heritage” because “marches are an American art form.” Back in the 1920s and 1930s, people would go to concerts solely composed of marches.

Kurland has noticed that music is a very important part of the Glen Rock community, most specifically noting Glenstock, Cabaret Night, and Coffeehouse. Lots of people also attend the winter and spring concerts. The Glen Rock Pops performs, and so do various rock groups. “I think it’s like one of those things that people just gravitate to,” said Kurland. “All the arts can be used to bring people together.” He also mentions that sports are other events people are drawn towards.

As a high school band teacher, Kurland is happy when he hears about his former students who have continued their musical activities after they have graduated. There are some people who have stopped playing their old high school instruments but then picked them up again later in life. “I would like people to continue to play wherever they can and to listen to music critically,” said Kurland. “Actually listen to music, and be open to different kinds of music.”

Kurland will start a new career at the end of this year as a mental health counselor. Looking back on his musical career, he reflects that being surrounded by music all the time is a “nice way to go through your life.” Since he is so used to being immersed in music, he is worried he will miss it when he retires.