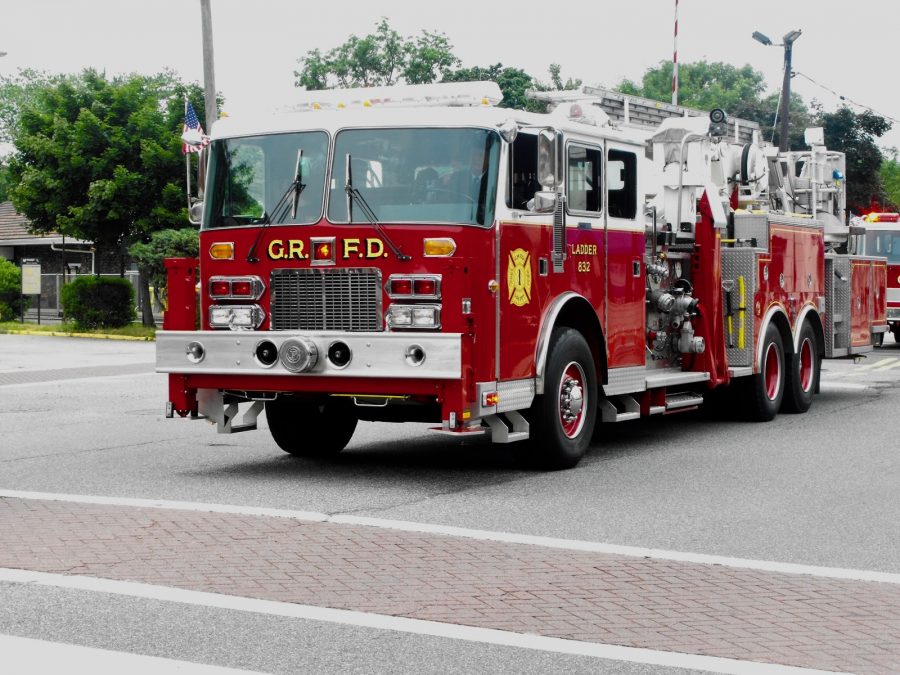 The Glen Rock fire truck passing through downtown GR during a parade. Ladder 432 was driven through town during the celebration of 100 years of Glen Rock in 2015.

After the fire department assembled and the little white house was quenched by hoses, the levels were nothing but a singed skeleton, and the basement a drowning wasteland, damp with water. Despite being generally extinguished, the areas where the fire had begun were still volatile, and required back-and-forth maintenance, most notably in Isis’s bedroom. Sparks would start again and again where the lamp was until they were finally stifled. Meanwhile, the  Greenes could only sit idly by, watching and waiting. After what seemed like forever, the firefighting was done and the department began packing up the truck. Before leaving, chief Tom Jennings handed over a voucher to the family, who was still in disbelief. The little slip that he gave certified the Greene’s extended stay at the Residence Inn Marriott Hotel in Saddle River.

Miraculously, the group was able to catch some rest, and prepare themselves for the sunlight of another day.

March 21 was Isis’s mother, Charis’s, birthday, and after being woken up by her fiery first gift, she couldn’t wait to see what was next. Still in shock, the family packed themselves up and out of their generous neighbor’s house, setting out for their next adventure: a hotel. Isis went into the situation hoping for the dreamy living space she had seen in TV shows, and in some way, dwelling in a hotel was just as picture-perfect as it seemed on television, but in other ways, it was surely the opposite.

“There’s people living around you so you can’t really do what you want,” Isis said. “You can’t be as loud as you want to because you have to deal with people everywhere you go. More importantly, there’s the fact that it’s just not home.”

Before heading off to work, Charis Greene embarked daily on the fifteen minute commute from the hotel to Glen Rock Middle School to drop off her daughter, Isis. Charis’s white Dodge Challenger travelled the seven miles per way between Glen Rock, for her daughter’s education, and Saddle River- where the family’s new home for what would become the next three to four months of their lives was located.

Undeterred by the hotel’s burdens such as an absence of privacy and the limit on volume, the family was accommodated by a convenient cleaning service and complimentary meals for breakfast and dinner.

The Greene family dog, Mocha, who had been waiting on the sidewalk for the trio while they escaped their burning house, seemed to adjust well to the new residence in the long run. Mocha was able to be walked whenever she pleased and enjoyed interacting with the other animals present at the hotel. Nonetheless, the poodle disdained elevator rides in particular, and initially struggled adapting to the new and peculiar environment.

With approximately three to four months out of their lives spent living in a hotel, the Greene family switched gears and were able to proceed with their residential adventures. The group rented a townhouse in Hawthorne. The quick departure from the Residence Inn may have cut their commute to Isis’s school in half, but it would not be their final goodbye.