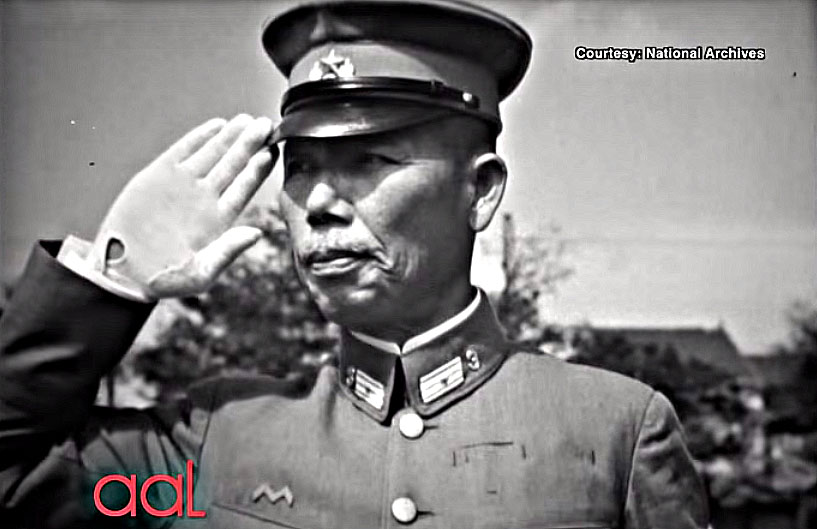 A Japanese military official salutes during World War II in this clip Roh collated for her Comfort Women segment.

Minnie Roh grew up in Korea, yet she never learned about Comfort Women in school. She learned about them at home as a little girl from her mother.

For Korean parents, it was the type of cautionary tale they would tell their children when they asked to go out at night: a story full of evil men.

“Annie was just like you,” one mother might say to her daughter. “She lived down the street from me. We used to wander into our neighbor’s garden and steal blackberries.”

The young girl, listening, nods her head, thinking this would be just another story about her mother’s childhood that she has already heard all too many times before.

“Then,” the mother says as she looks away from the pot she is stirring to look her daughter directly in the eye, “she was taken.”

The name ‘comfort women’ is a euphemism on multiple levels: first, it downplays the torturous existence that these abducted women survived; secondly, many of them were not yet women — they were girls, 12, 13, or 14 years old, snatched on their way home from the market or walking to a neighbor’s house.  The original word is derived from the Japanese ianfu, a socially acceptable way to refer to a military prostitute.

What distinguishes the Korean mother’s tale from similar horror stories involving boogeymen, though, is that her story is true.

The Japanese occupation of Korea began in 1910, over three decades before the official start of World War II, which would signify the end of the hegemony.

During World War II, the Japanese Empire turned particularly repugnant.  It exploited the land for food, leaving the native Koreans in squalor.  It forced the Korean men into hard labor, forcing them to work for the Japanese military machine. It stole women from their homes either by force or fallacious promises of a better life, locking them into military brothels and forcing them to sexually serve sometimes 50 men in a single day.

Going back and forth to Korea a lot, you hear about these rallies and these old ladies trying to get justice.”

This is where the cautionary tale that the mother tells her daughter comes from, a history of terror and violence that still keeps her up at night.

Yet the girl, dressed in a white shirt and a dark blue vest, says to her mother, innocently:  “Who still gets kidnapped? That was years ago. It doesn’t happen anymore.”

And that was that — with a single dismissal, the story of Comfort Women was swept under the rug.  Somewhere between 10,000 to 200,000 women’s stories casually ignored because, of course, it could never happen again.

For people like Minnie Roh who know the story, the biggest fears are ignoring and forgetting.

“Going back and forth to Korea a lot, you hear about these rallies and these old ladies trying to get justice,” Minnie Roh said. “It is one of those things that are kind of just there in my stratosphere.”

What Minnie refers to is how time and distance gradually blunt the trauma suffered by these Korean women, smearing them from the annals of history.

Unfortunately, this is the way that the Japanese government wants it.

When Emperor Hirohito of the former Japanese Empire surrendered to the Allies on August 15, 1945, the Japanese quickly went to work — the Japanese government, despite its capitulation, had already seen the remnants of the Nazi party captured and imprisoned for its crimes and knew of the impending Nuremberg trials that would occur beginning in November.

Yet, oddly enough, despite atrocities committed by the Japanese government in places such as Nanking and the Bataan Peninsula, the Tokyo War Crimes Trials were of a significantly lesser degree than Germany’s legal punishment.

The reason may lay in a single word: fire.

Surrendering on their own terms after witnessing the mammoth power of the atomic bombs dropped on Hiroshima and Nagasaki on August 6 and 9, 1945, the Japanese had already implemented plans to dispose of evidence before the Allies flooded the Japanese mainland, which, unlike Germany, had not yet been penetrated by Allied foot soldiers.  The fact that Allied soldiers already possessed areas of Germany when the Nazi party surrendered preserved evidence that otherwise could have been tampered with; in Japan, this was not the case.

Many of Japan’s damning files were burned, shredded, or otherwise destroyed.

Apocryphal accounts were told by liberated soldiers, Japanese military officials confessed to heinous acts, but nonetheless many stories went untold, buried with the bones of those lost and gradually blanched by the slow tide of history.

For most Americans, the story of comfort women is alien and disturbing: these were young women who were taken from their homes, given false promises of work or food, only to be deposited into the dank corner of a “comfort station” where they were repeatedly raped and beaten by their captives.

They were not all Korean, either.  They came from China, the Philippines, Taiwan, Burma, Indonesia, and even Australia, among others.

Minnie Roh heard these stories when she was a child.  Then, when she moved to the United States, she mostly stopped hearing them.  The protests of the comfort women became the backdrop to the weekly news; they became a fixture of nature, a sad fact that was in the past now.

In Glen Rock High School, one of the top achieving public schools in New Jersey, most students had never learned about comfort women.

The issue was only addressed in few American textbooks. Yet that wasn’t enough for Japan.

According to The Japan Times, 50 scholars from Japan demanded, in a December 2015 letter to Perspectives on History (a publication by the American Historical Association), that McGraw-Hill remove a section from its Traditions and Encounters textbook that explained the existence of comfort women during World War II.  It marked the first time that a Japanese entity had attempted to censor information regarding comfort women outside of its own borders, which it has already done completely.

For all intents and purposes, it seemed as if Japan might be winning in its concerted efforts to whitewash comfort women from history; fewer and fewer people knew about the atrocities and even a smaller amount told their legacy.

Then, the women started dying.

Their numbers dwindling, Minnie Roh knew she had to act quickly.  She had to capture the story before it was too late, before the last living witnesses of this horror story vanished, just like the Japanese government had wanted it to be.