Do we have enough snow days?

Winter, the season hated by most people for its cold weather, snow,  and all the drudgery to do with winter. Everytime kids hear about snow, all they think about is having a snow day. Yet due to a lack of snow days scheduled into the calendar, many parents have to worry about scheduling their vacation during spring break around makeup snow days.

In the past, Glen Rock Public Schools have had four snow days, and if we didn’t use them all, they were added to spring break. Recently, however, the allotted days have changed from four to two days, which I believe is crazy. They changed the amount of snow days to two, yet we live in the Northeast where snow is very common during the winter.

When we exceeded the number of snow days this year, we had to make up those days during spring break. Many students consequently did not attend because they were on vacation, or parents had to cancel their vacation plans.

Some may argue that you can’t predict how much snow is coming every year, but you actually can by looking at the last five years and averaging them out. Also they might say if we give four days and we only use one snow day, we then have to give the days back to the kids.

From what I experienced this year when I came to school on the two days during spring break that were added due to the snow days there was low number of students there and also teachers. Those who were there had no interest in being there, and it just felt like a wasted school day.

Instead, they could have done a half day before spring break on Good Friday and that would have counted as a day.

Lastly, many schools around Bergen County have more than two snow days. I believe the State should determine the number of snow days for the school districts in the state.

Why we have enough snow days 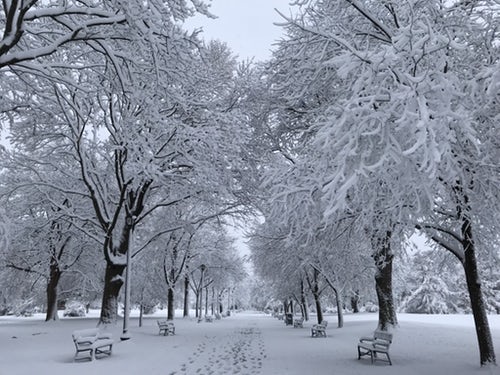 Snow days are necessary in certain situations, but they are not always essential and they disrupt students’ education.

Snow days. They come few in a year, but bring excitement and joy to students who are dying for a day off.

When creating the school calendar, there is always controversy when it comes to the number of snow days included for the school year. This previous year, the calendar only allowed for two snow days, but it exceeded its limit by totaling to four. As a result, students were supposed to come into school for two days during spring break.

However, in the past few years, snow days often went unused. Some may believe that it is best to add some more snow days into the schedule, however there are many downsides to snow days.

First off, the school is way more likely to use snows unnecessarily if they are built into the schedule. Compared to other schools, Glen Rock High School does not have a busing system, which really decreases the need for snow days. Besides that, having delayed openings and half-days are another way to avoid snow days.

An additional way to minimize snow days is to wait until the morning, because at times when a snow day is called the night before, it turns out to not snow that much. By calling snow days in the morning, it is easier to get a more accurate forecast, and maybe a delayed opening could suffice instead of a snow day.

In the moment, snow days seem great, but what they really do is disrupt the work flow during the week. As proven in many studies, having more school days during the year has numerous benefits to students’ education.

In 2009, a study was done in Colorado and Maryland that showed passage rates on standardized math tests dropping by half of a percentage point for every inch of snow (on snow days). The purpose of this comparison was to quantify how much one day’s worth of time during class would affect students’ test scores.

It’s common knowledge that missing a day of school, can hold kids back in their education. When students attend school instead of having a snow day, they improve their academic prospects and chances for graduating.

In the past, receiving the call for a snow day is quite a joyous moment, but this year I wasn’t always happy about having snow days. Alike many other students, I was upset that my spring break would be cut off by two days due to the overuse of snow days. Also, snow days can cause a lot of confusion and delay of tests and other assignments, which is another downside.

Overall, snow days hold back students’ learning and they also negatively affect teachers’ lesson plans. Of course snow days are necessary if the weather is dangerous outside, but if more snow days were added to the schedule, the school would be more likely to use them for an unnecessary reason.