Photo Credit: Ryan Hornish
I believe that Student Athletes should not take Physical Education while they are in an athletic season. Per the Merriam Webster Dictionary, Physical Education (P.E.) is the instruction in the development and care of the body ranging from simple calisthenic exercises to a course of study providing training in hygiene, gymnastics, and the performance and management of athletic games. Athletes learn a lot 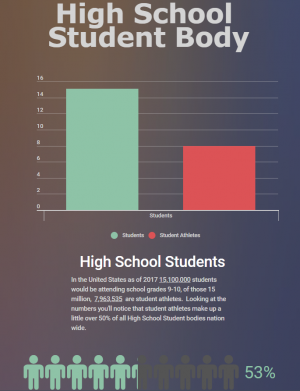 of this in practices by their coaches or in games.

As a two sport student athlete and one of 7,963,535 High School student athletes in the nation I find the discussion of athletes taking gym class in an athletic season important but impractical. It is us, the student athletes that attend our classes, go to practices and games. We raise the banners and trophies that say conference or state champions but how did we do it all. Relentless practices almost 6 days a week after school or in the morning lead to the those wins, but how does this correlate with PE in schools?

The possibility of an athlete getting hurt in gym class is pretty high. As of a statistic taken a little over 10 years ago, injuries in gym class since 1997-2007 had risen 150% nationwide. I also believe it’s unfair for athletes that participate in gym because I know that with Glen Rocks athletic program, practices for sports are 6 days a week and range from 1-2 hours plus daily, also section 18A:35-8 in N.J.A.C. 6A:8, Standards And Assessments states that a student must take a two and one-half hours of each course every school week. Technically if administration allows credits to be given for sports played which can be done, Students could collect the required credits needed yearly for gym.

Some students could possibly use this as a way of getting out of gym class but If controlled well enough by administration. The possibility of student athletes not taking gym while in season could possibly lead to a boost in grades and lessened injuries and overall happier and less stressed out students. Out of season students would have to go back to gym or health class so students still meet credit requirements, I feel like this is the best option that can be pulled from the argument.

One debate that has been an ongoing issue throughout modern day sports is, should all sports in America allow American students to make the jump from high school to the pros.  For over a decade it has become a requirement to go to college for a minimum of a year before you can enter the draft for the NBA. The NFL has an age restriction based on when you can enter the league.  Baseball, golf, bowling, and tennis are just a few sports where you don’t have to go to college for. Only baseball and golf would be the only two sports that would be considered mainstream sports.

The MLB has many different minor league teams and many different divisions, giving players who aren’t developed for the league yet to work their way up.  But any player can get drafted straight out of high school and they don’t need to go to college at all.

For the NBA, players used to be able to go straight into the league out of high school and some of the greatest players have gone straight to the pros like Kobe Bryant and LeBron James.  Both of these players became very successful coming straight out of high school and had no problems adjusting. Both players will go down in the hall of fame and many believe both players can be considered the greatest players of all time.

The NFL is the only league that has an age restriction, but the NFL is another beast of its own.  The way that football is played compared to other sports is another level of putting your body on the line.  Concussions happen often, players can go paralyzed, and serious injuries are way more common. The NFL wants to make sure every single player in their league is fully developed before entering their league.  The NFL is the only league I fully agree with their policy because of the physical level the game is played at.

I’m pro athletes going straight into professional sports from high school because many players are actually capable of going straight into their professional careers.  Some players you watch get forced to play in college and they absolutely dominate everyone they play and it’s almost as if it was a complete waste of time for them. Of course they’re getting an education but most successful players who want to go to the pros, forgo most of their college education in the end anyways.  When they go to college it’s very high risk for not so much award, they’re risking injuring their bodies severely and ruining their future careers while they aren’t making money at all. When players can immediately go into a professional league and make money their first year out of high school.

Of course there are risks when going straight to the pros from high school.  Sometimes the player isn’t mature enough and doesn’t mesh in with the rest of the league and immediately fall out.  Also, players aren’t always physically ready to play the big boys in sports. Anybody doing this is also putting all of their money on the table because instead of getting an education they’re risking it all by trying to chase their dreams.

In my opinion in the end, I feel like athletes should be able to choose if they want to go straight into a professional sport from high school.  There are plenty of risks they’re taking if they choose to play in college or in the pros, If someone knows they have the ability to make the jump, they should be given the chance to make that jump.