What is more important: hard work or talent?

“Hard work beats talent when talent doesn’t work hard.” It’s a common, motivational quote, often displayed on shirts for sports teams. Although people often recite it mindlessly, there is truth in the statement.

Being talented is not enough. Yes, natural skill is helpful. However, without putting in adequate effort, the outcome will be far less successful. A major issue is that people who are talented have not had to work as hard for success. If one has trained themselves to put in the effort that is necessary, they will reap many more long-term benefits.

A simple and relevant example to examine is success in school. The importance of IQ versus hard work and effective study habits has long been debated. As a student, I often see people coasting through their classes on their intelligence alone. But then, there are the students vigorously taking notes, and showing a general interest in the material. Who is more successful?

In a 2013 Ted Talk, Angela Lee Duckworth argued the importance of determination. Duckworth, a psychologist that studies education at University of Pennsylvania, said that the most successful students possessed grit. “Grit is passion and perseverance for very long-term goals,” she said. “Grit is having stamina. Grit is sticking with your future, day in, day out, not just for the week, not just for the month, but for years, and working really hard to make that future a reality.” This sense of determination and perseverance manifests itself in hard work, allowing for more success.

A study by K. Anders Ericsson, Ralf Th. Krampe, and Clemens Tesch-Romer, argues the effectiveness of “deliberate practice.” These researchers determined that to be successful, one must put in purposeful and rigorous effort, citing 10,000 hours as the minimum.

While this does not make talent irrelevant, it does prove that effort is immensely important. It is unrealistic to assume that one can be incredibly successful without any talent to begin with. But, the important factor is how you build off of that talent. To improve your natural skills, you need to constantly work hard.

Perhaps the problem is the way society prioritizes talent. One study found that potential investors significantly favored “naturals” over “strivers.” For strivers to be prefered over naturals, on average, the applicants needed 4.5 more years of leadership, better management skills, $40,000 more capital, and 28-IQ points higher than naturals.

This preference unfairly punishes people who have worked hard for their success, and it prevents a more experienced and conscientious workforce. From a young age, people need to be taught the values of hard work. Calling people “naturals” can instill the idea that they do not need to work hard; that they are immune from failure. But, the true skill comes from the effort and perseverance that one builds up throughout their lives.

The renowned author Stephen King once said, “Talent is cheaper than table salt. What separates the talented individual from the successful one is a lot of hard work.” 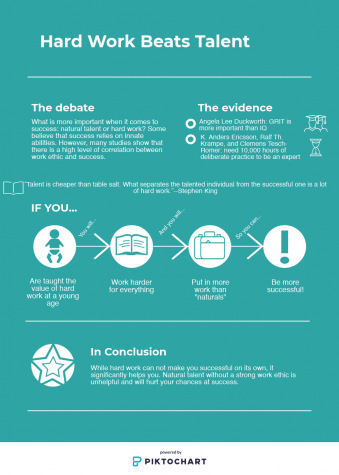 Most people want to tell you that hard work will get you wherever you need to go and even if you aren’t as good as those who are born “naturals”, you can work your way up. However, this is simply unrealistic. Of course one can work hard and definitely improve their skills and abilities, but if not born with real talent, they won’t be able to compete with those who are naturally inclined.

On the surface, hard workers are more appealing. By working hard, you get a more enthused and active workforce. But in actuality, people with natural talent are subconsciously chosen over those who just “work hard”.

In a study conducted by Chia-Jung Tsay at the University College London, groups of investors would be approached by entrepreneurs who were put into two groups; titled “naturals” and “strivers”. Before the experiment, the investors had  stated that they would choose hard workers over talent, yet at the end, “naturals” were chosen more often than “strivers”. The study shows how talent is more appealing in the workforce, as these people are better qualified for the jobs they are chosen to take on.

In addition, talent is more impressive than hard work. According to Business Insider, “So you spent years climbing your way to the C-suite at your last company, regularly working nights and weekends and taking on extra projects. Big deal. Tell us how you were promoted to the C-suite within a day of arriving at the company because they could tell you were a born visionary — then we’ll be impressed.” Reputations are a big factor in the hiring aspect of a job interview, and someone who is more impressive is more likely to be hired than someone who improves at a slower rate.

While we all want to say we value hard work, at the end of the day the more talented person is destined to succeed more than an individual with less talent.