I want to run through the halls of my high school. I want to scream at the top of my lungs.- John Mayer, “No Such Thing” 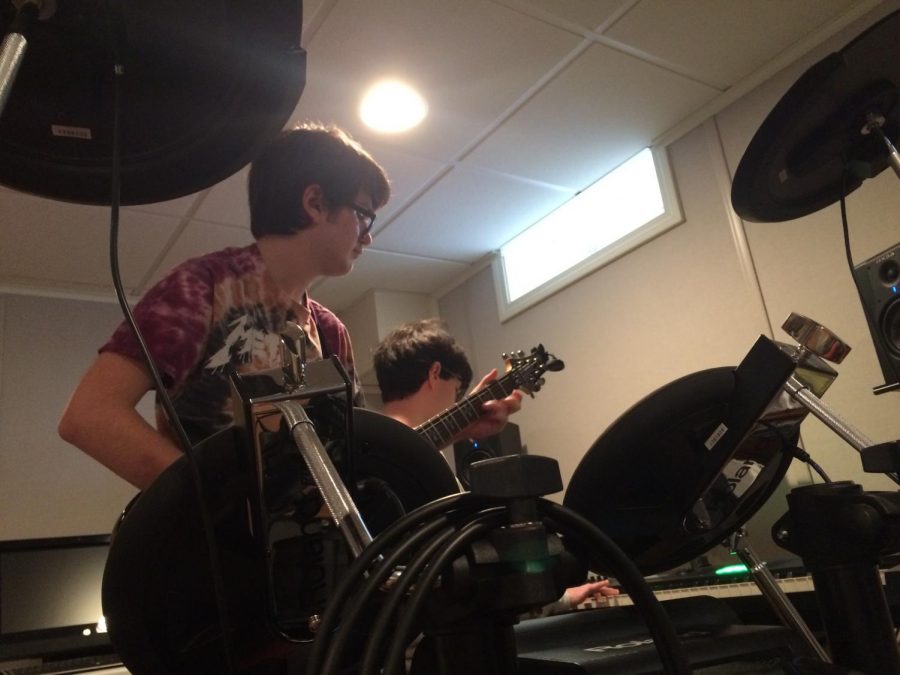 A New Jersey teen jams on the bass as he waits for his bandmates to arrive at his house for practice.

Another teenager walks down the stairs into the basement, his brown, shaggy hair falls onto the tips of his large, thick-frame glasses. He carries his electric guitar and laptop, wearing a tye-dye Metallica t-shirt. The boy playing the electric bass also has shaggy brown hair and wears smaller glasses. He wears a light grey sweatshirt with the word “RESIST” written across it in bold, grey letters. The third teen contacts her bandmates on FaceTime, wearing a thin black choker.

AJ Knapp, Blaise DeLeon, and Natalie Madsen are No Info, an alternative and hard rock band based in Ridgewood, New Jersey. Even though they can describe themselves as alternative and hard rock, they do not box themselves in with one particular genre. DeLeon, their bassist, explained that their music is a “hodge-podge of different genres,” and they want to find a happy medium between the different genres they enjoy. Knapp, DeLeon, and Madsen have their own musical interests that influenced them to be a part of the world of music. Knapp mentions Metallica and Guns n’ Roses, while DeLeon cites Soundgarden, the Cure, Stone Temple Pilots, Radiohead, and Joy Division. Madsen acknowledges Shinedown and Motionless in White. Together, they particularly take note of Green Day, Faith No More, Metallica, and Nirvana.

No Info is not just a cover band. When Knapp was sitting on the bus coming home from school one day, he typed lyrics on his phone to look up different words. That was when he composed “Hollow,” No Info’s only original song.  “Hollow” is an anti-drug song because “drugs screw you up.” Knapp wanted to write the song because he felt that this was something he had to “get out there,” as an overwhelming amount of people do drugs and alcohol.

No Info practices in DeLeon’s basement, with a small drum kit and a keyboard with standing speakers on either side. In the back of their musical bubble, a record player rests on a white table, and a computer rests on another white table with a collection of records underneath. Sunlight streams in from rectangular windows and there are small lights on the ceiling, casting light on the keyboard backed by pale grey walls and a hardwood floor. Knapp’s laptop sits next to the foot pedal of the drum kit, and when his foot presses a pedal, the computer screen switches to a different setting, controlling the distortion of his guitar. No Info has welcomed two new members recently: Diego Santiago on drums and Joe Green on rhythm guitar.

Knapp, DeLeon, and Madsen all deal with the pressures of school, stress, and society, and they escape into music to “help with different emotions.” “Music is that one thing that everybody can relate to. Music can really just bring people together and especially a community,” said Knapp. Knapp comes home from New York City with “a ton of homework every night.” Music helps him try his best in his schoolwork and keeps him level-headed. When he listens to music, “everything else just disappears.”

DeLeon is able to connect with his teachers regarding their shared musical interests. His English teacher has shown him some hardcore punk bands, the blues, and folk music from the 1930s and 1940s. DeLeon has even discovered some songs from the Dust Bowl. DeLeon said that music is “an art form that really speaks to individuality. Every artist is unique, and I just find that very admirable. I think that’s what makes it a very special art form.”

Madsen listens to music to help her de-stress and focus on her work. She always wears her headphones during school, even during class, just to relieve some stress. When she concentrates on the lyrics, she knows that “everything is gonna be okay.” She uses music to get her emotions out, and if she did not have music, she “would be such a different person” because she would not be able to release her emotions. To Madsen, music is “everything.” Music has pulled her out of dark times. “All I can really say is just music can save you,” said Madsen. “It really can.”