We should have more Foreign Language classes 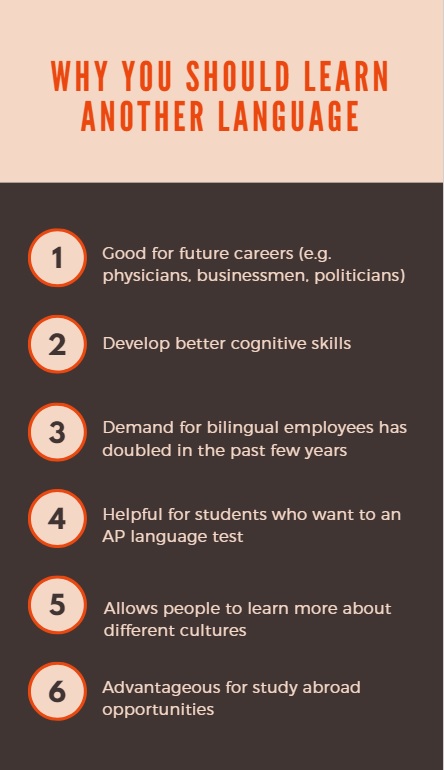 With over 7,000 languages spoken all over the world, it’s almost unrealistic that our school’s World Language department is made up of only four.

While Glen Rock currently offers classes in Spanish, Latin, French and Mandarin Chinese, it would be more beneficial for the school to introduce more languages in addition to the original four. Japanese, German, Arabic, Russian, Korean, Italian and Urdu-Hindi are all languages that should be considered.

Knowing more than one language is advantageous for most, if not all, professions. Students who plan on going into the healthcare, business, political or similar fields would benefit from learning a second language.

Arabic is one language that we don’t teach in Glen Rock, yet is predicted to be one of the most spoken languages in the future. Similarly, Hindi-Urdu, Tagalog, Vietnamese and Korean are all growing quickly in the U.S but aren’t being taught. Because learning these languages in school will help students in the future, they should be incorporated into our World Language program.

Additionally, studies show that individuals who know more than one language have better cognitive skills than their monolingual counterparts.

An article from The New York Times, “bilinguals, for instance, seem to be more adept than monolinguals at solving certain kinds of mental puzzles.”

Having more language classes, especially those that have associated AP tests is also helpful for students who want to an AP language test.

Ultimately, even though Glen Rock has a good World Language program, it can definitely be improved by having more options.