School is not too long

Students in Glen Rock High School spend about 7 hours per day in the school. 7 hours, which can seem too long for some people, is reasonable hours to spend in school.

Students are required to spend certain amount of hours in the school for each year. The minimum amount of hours required as school days per year, which are also called compulsory hours, vary among the states, but most states are on the range between 175 to 180 days of school and between 900 to 1,000 hours depending on the grade level. These minimum hours are not easy to break through therefore shorter school hours per day will lead to longer school days per year which not many students will prefer.

As a high school student, I also thought that 58 minutes for each block and total 7 hours in the school was too long at first. One time, when I was interviewing a student who is living in Korea for my long feature article, I had personal conversation with her after the interview for a moment. I told her that my school ends at 2:54. She then became surprised and said that it ends much earlier than her school. After that day, my opinion toward the time spend in the school started to change.

As I am studying and learning in school, seven hours (technically six hours because an hour is for lunch) goes faster than I expected to be. After experiencing those fastly passing times everyday in the school, I think that 7 hours are actually not that long than I had thought before.

There are 24 hours per day. Suppose that a person spend 7 hours in the school and sleep for about 8 hours, which is a recommended sleep time per day for teenagers age between 14-17. There are still 9 hours for each day for students to spend their time on what they need or want to do including after school activities and homework. That should be enough time for the students to do as they wish.

It will be also helpful for their future if students are used to spend about 7 hours per day in school. When students grow up and get full-time jobs, they should expect to spend approximately 8 hours per day. Spending 7 hours in the school will give students good feeling about what it will be likely to spend 8 hours in their working place everyday.

Some people will criticize that school is too long. However, as a high school student, I think that school is not that long than I had thought before and since there are required minimum amount of school hours that we have to spend it is hard to break through that. Therefore, school is not too long.

School is too long 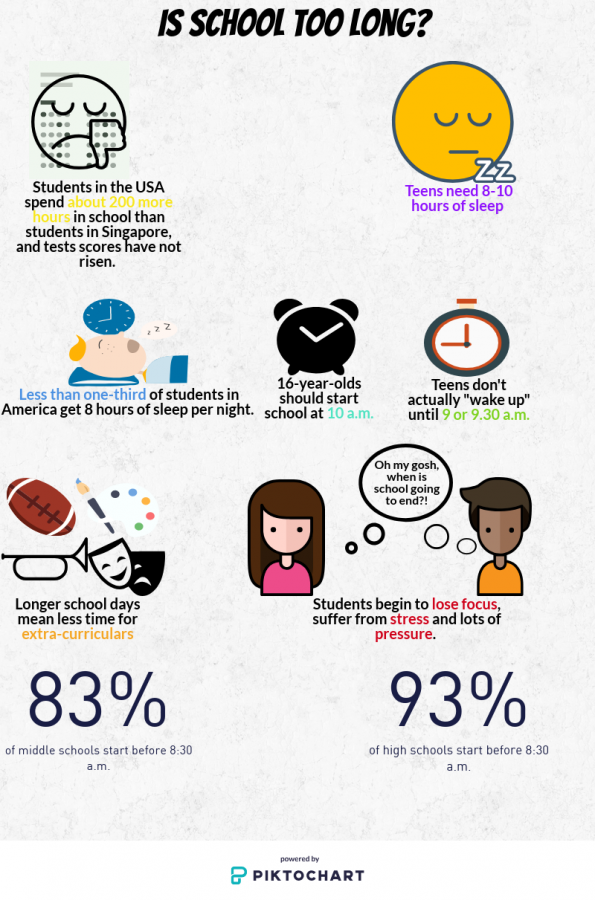 It’s 6:40 a.m. “Ships in the Night” by Mat Kearney rings loud in my ears. I jump and try to silence my phone, groggily pushing off the covers and reluctantly trudging down the stairs to get ready for school.

7:50 a.m. to 2:54 p.m. Seven hours and four minutes. That’s the least amount of time a GRHS student spends in this building. But we can’t forget about the extra-curriculars, sports, and jobs on top of mountains of homework. Many times this year, I’ve found myself wishing I had a time-turner so I could be in multiple places at once doing everything I needed to get done. There’s just not enough hours in the day.

When I’m home for the day, I just want to go to sleep. I don’t get enough sleep, and I know a lot of students don’t get the recommended eight to ten hours. School starts way too early. Is it necessary to start at 7:50? What about 8:30? In 2014, the School Health and Practices Study came to the conclusion that 83% of middle schools and 93% of high schools in America start before 8:30 a.m. Teenagers need more sleep because when sleep deprived, they are more likely to experience symptoms of depression, exercise less, and be overweight. Sitting in front of a computer doesn’t help as constant use of electronics also messes up sleep schedules. Unfortunately, much of my homework is on the computer as we try to “go paperless.”

A 2014 study of 9,000 students found that schools with later start times had improved attendance and academic performance. Research conducted at Harvard and Oxford showed it would be beneficial for the average 16-year-old to start school at 10 a.m. and a freshman in college to start classes between 11 and 11:30 a.m. A teenager’s body only actually starts to wake up around 9 to 9:30 a.m.

Teenagers also feel pressure and stress with long school days. School drags on and on, causing students to stop caring, in turn causing increased tardiness. If they get to class later, school will be over faster.

People may argue that longer school days provide more time for learning, which will hopefully benefit students who are falling behind, but that won’t prove effective if kids are fatigued and distracted. Teachers will also have to be paid more for working longer hours, and the upkeep of public schools for longer periods of time will increase taxes.

Students who are falling behind might not benefit from a longer school day. Students tend to lose focus as the school day drags on. Ultimately, increasing school hours could make the situation worse. This student may learn differently than the rest of the class and therefore needs to be taught in a different way.

Also, spending more time in school does not guarantee higher test scores. The Seattle PI found that, in 2009, even though students in the USA are in school for about 200 more hours than students in countries like Singapore, test scores have not risen.

In addition to the excessive school day, students have to complete several tedious homework assignments. As students robotically do homework, they stop caring about what they’re doing. At the end of a long day, they just want to get it done. As a senior, I’m preparing for college, and I’ve heard the same spiel many times: colleges need to see that you have good grades, participate in extra-curriculars, and are active in community service. It’s already stressful enough to get done everything that needs to be done. A long school day on top of that just adds more pressure, because now there’s a shorter amount of time to complete it all.

I have option first period on Day 1 in the rotation schedule. It’s nice because, thanks to senior privileges, I can sleep in an extra hour. I wake up feeling refreshed and ready to start the day. If only every day was like that.