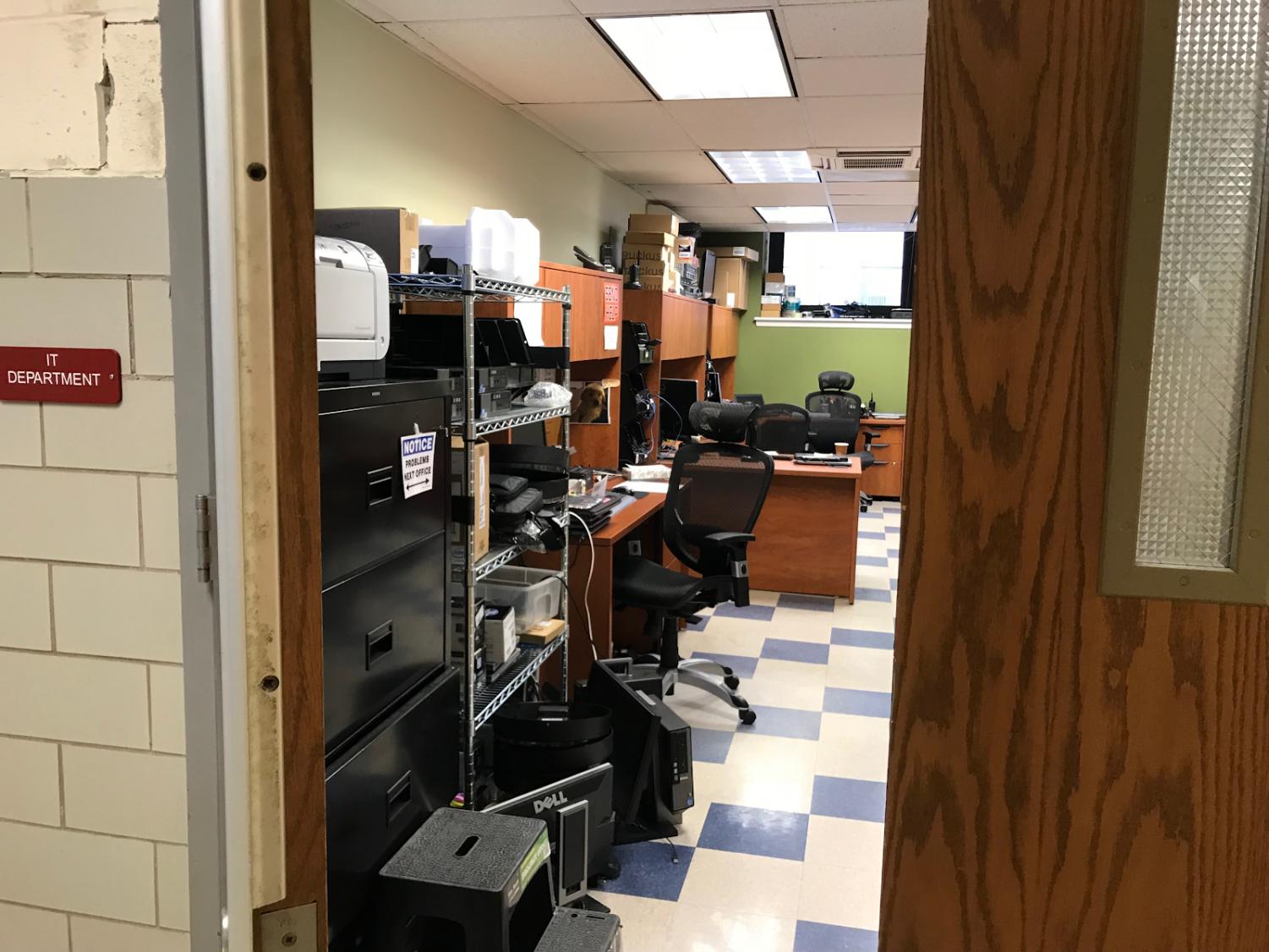 The IT Department the Batcave of the unsung heroes solving Glen Rocks Tech issues, computers and printers fill the room while desks are kept clean. Members of the IT Department have been busy setting up school computers for the PARCC. (Photo Credit: Ryan Hornish)

The IT Department the Batcave of the unsung heroes solving Glen Rocks Tech issues, computers and printers fill the room while desks are kept clean. Members of the IT Department have been busy setting up school computers for the PARCC.

To PARCC or not to PARCC (ready)

On a muggy April morning, Students make their way to school through rainy streets, joking with friends over puddle filled sidewalks or bunched into cars. Friends meet at one another’s lockers and discuss the plans for the day, Spring athletes converse to one another about practice and upcoming games.

Also on everyone’s mind is the PARCC, one of the last obstacles students throughout New Jersey have to traverse before summer.

The PARCC, short for Partnership for Assessment of Readiness for College and Careers, is an electronically administered state test is taken by students in April. It has become a nuisance that teachers have come to dislike but have learned to deal with.

Kara Grady, a math teacher, said the test, “is administered in April and there is still a full 2 months of the year left so students are going into this, taking a test on a subject that they haven’t entirely learned, there’s a little disadvantage.”

Because of this unfair disadvantage, math teachers usually tell their students to skip problems that they don’t understand but to go back to them if they have time once they finish.

Unlike the Mathematics portion of the test, the English portion is easier for students. Students have consistently been performing higher in that field than math. This could partially be because the curriculum for an English class is repetitive.

Astoreca also said that if the PARCC or any test was given in either May or June, it could affect high school students taking finals, thus adding more stress to a student.

Students’ views on the PARCC are much different, believing that the time allotted for the test is excessive. Some students finish with more than enough time to look the test over a handful of times before staring at a wall for the next umpteen minutes.

A student that had taken the PARCC said, “To be honest I think it’s kind of the opposite of beneficial to the school. Instead of learning new things in the classroom your pretty much taking a test on basically half of the things you don’t know. It’s not really learning in my opinion.”

Last year’s PARCC results showed an increasing pattern of the students inability meeting the standards for the PARCC’s math section. Schools had low percentages of student failure in Algebra 1 and Geometry whereas Algebra 2 was where many students from across the state failed to meet standards.

The English portion of the test had many students pass with flying colors and room for improvement was minimal. Schools had entire grades of students who passed the state requirements. These scores aren’t due to poor teaching, nor are they due to politics or administration.

Instead, it’s time that causes these problems. With finals, SAT’s and ACT’s looming over the heads of many high school students, the time allotted for PARCC is the only time possible at the moment. 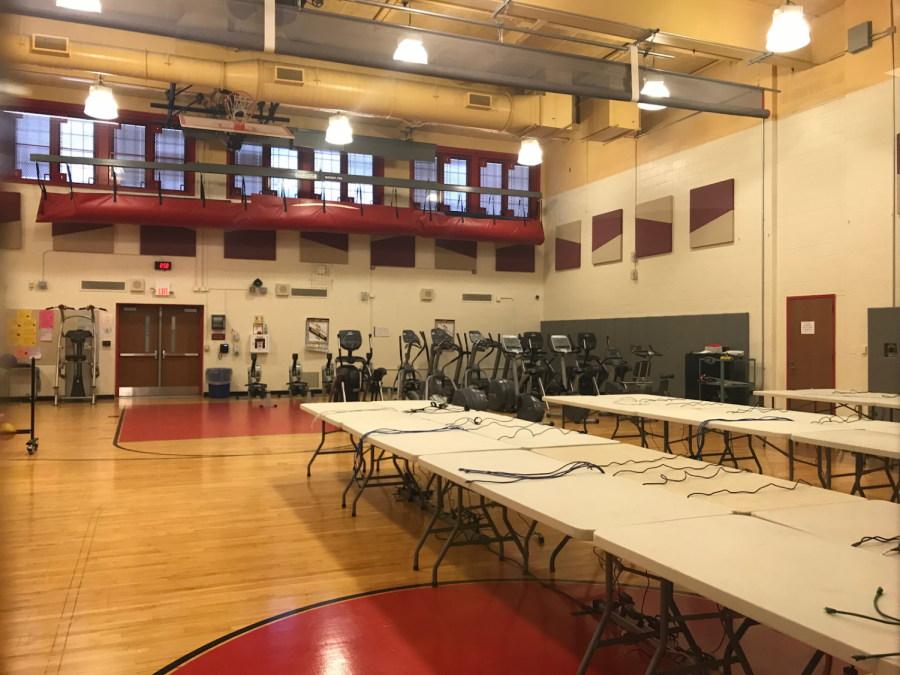 The All Purpose Room being set up for the middle school PARCC testing, high school students will be taking them on their school computers. Don’t forget to charge your computers!

Murphy listed dissolving the PARCC exam as one of his major goals.

“The notion of assessing kids to make sure we understand how they’re doing, I’m all in for that,” Murphy said, “But these big, white-knuckle, once-a-year, with lots of weeks getting folks tuned up to take a particular test I’m not a fan of. Never have been.”

It is unknown of what Governor Murphy wants to replace the PARCC with or exactly when the PARCC will be removed but students and teachers alike support this change.

Governor Murphy and the State Department of Education have proposed a committee to solely focus on finding new exams and using the input of students and teachers to create a new standardized test.

After roughly 11 years of students taking the NJAS, the state Board of Education replaced the test with the PARCC in the 2014-15 school year.

Unlike the NJASK, the PARCC is electronic and administered on laptops rather than paper and pencil.

Technology had finally caught up to testing, but was the test ready for the state?

In April 2016, the second year of PARCC testing, students across the state logged on to laptops outfitted with the PARCC test software only to find out that the test wasn’t accessible. The test was quickly postponed in order to fix the issue and New Jersey became one of many states to experience an issue with electronic testing.

After four long years, the many kinks and bugs once affecting this test have been fixed, but many states have already dropped electronic testing, including the PARCC, due to computer glitches. The state has paid approximately $108 million over the last four years because of glitches.

Additionally, New Jersey is paying $25.50 for each student’s test, $3 dollars less than the NJASK.

However, the hefty price tag on the test isn’t what concerns Governor Murphy and other educators. Rather, it’s whether the test actually fits students’ needs. If not, then it would still end up being a waste of taxpayer money and educators’ time. 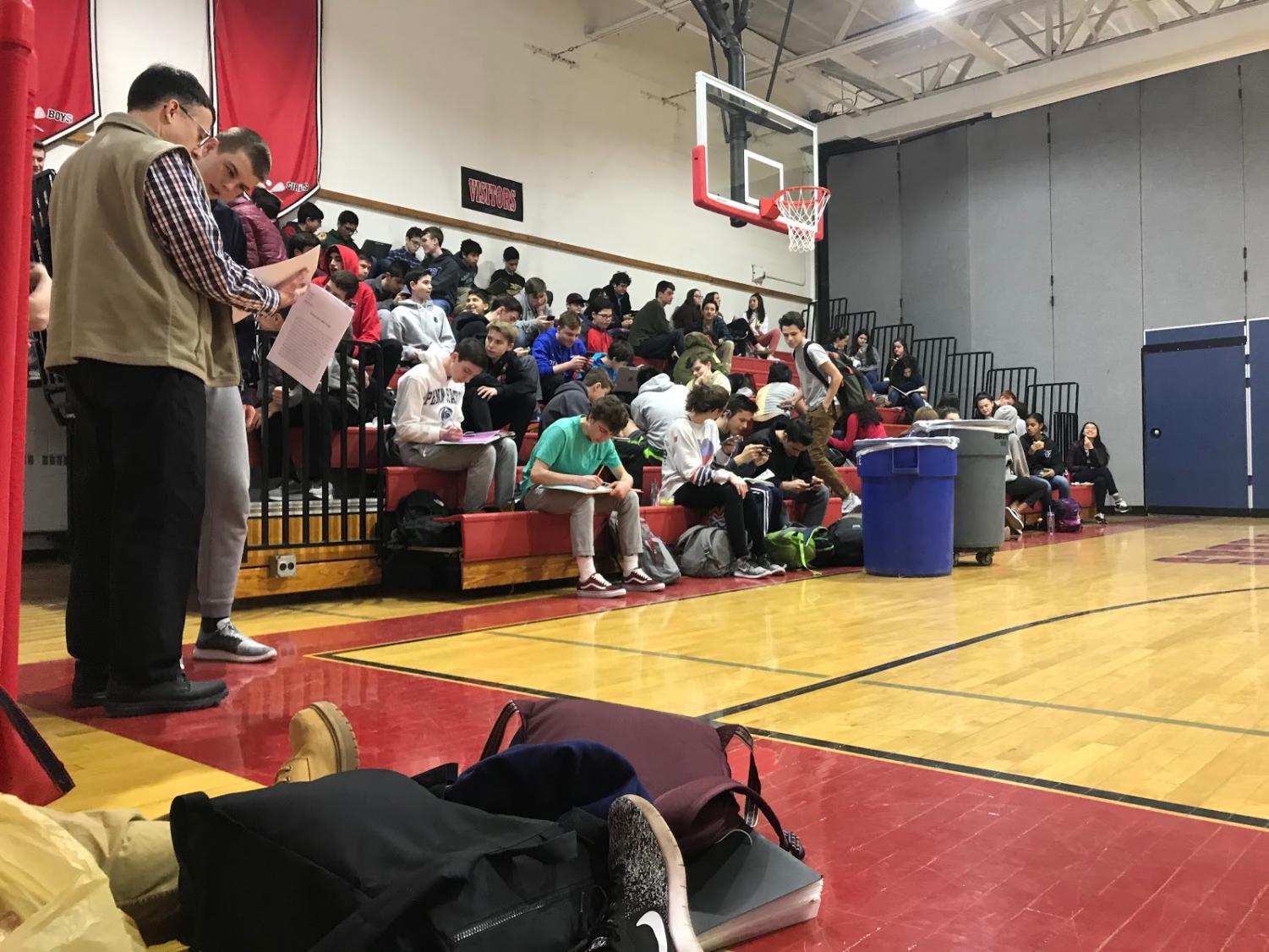 Standardized testing has become a way of life for students. They learn the curriculum throughout the school year and test for around a week or more. Then testing is over till the next school year.

A majority of students go into the PARCC confident they will do well and that their teachers have taught them enough to get a good score.

But some students feels that math teachers should be given more time before PARCC testing is administered, so they can finish teaching the curriculum. This is an issue many students have with the test: not being able to learn the curriculum to its full extent before taking the PARCC.

Because PARCC is taken in April, 2 months before school is over, teachers are still going to teach after the PARCC.

When hearing the PARCC test would possibly be changed out for some better examine the near future, the reaction from students was very positive.

Unlike the students, Principal John Arlotta believes standardized tests, “run the gamut” but that the PARCC has and will be a good way to prepare students for the future.

Arlotta said “everything is online” and that other forms of testing will someday be online and that more jobs will be implementing the use of computers and, as well. 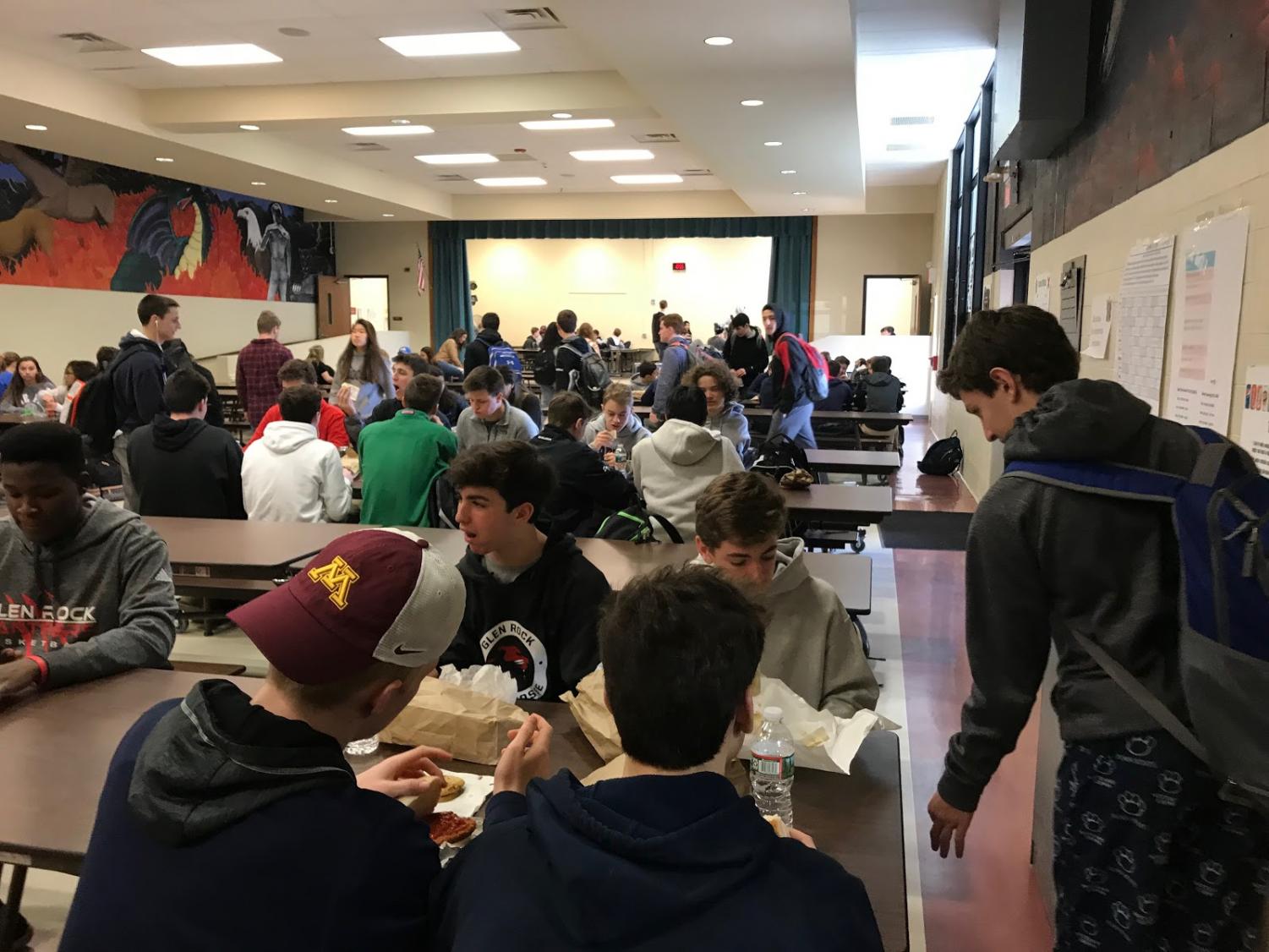 Students enjoy lunch as they sit and talk with their friends in the cafeteria.

Technology and the modern world have finally caught up to standardized testing.

The test is able to run on all computers but there were some issues that surfaced during the first 2 years of the exam.

Computer glitches and technological difficulties would make students’ computers shut down or exit out of the test, sometimes losing all of their work completely. Students would be able to get right back to the test though with a little help from the teachers monitoring the test.

A major issue that had occurred during the second year of testing was when students logged into the test, they were met with blank screens un-fixable at that moment.

New Jersey has not been the only state plagued by technical difficulties. Tennessee, Alaska, Texas, Nevada, Minnesota, Kansas and Virginia are among the list of states that have experienced problems with their own online exams.

These glitches lead some states to scrap and abandon these tests and take time to integrate online testing to schools instead of rushing to get the test created in an absurd amount of time.

Although paper and pencil tests have been the most reliable form of testing with the only issues being a typo or a misprint and not a network being shut down for an entire day, computerized testing still has its advantages. Online testing uses no paper, is fast, easily graded, and costs less. 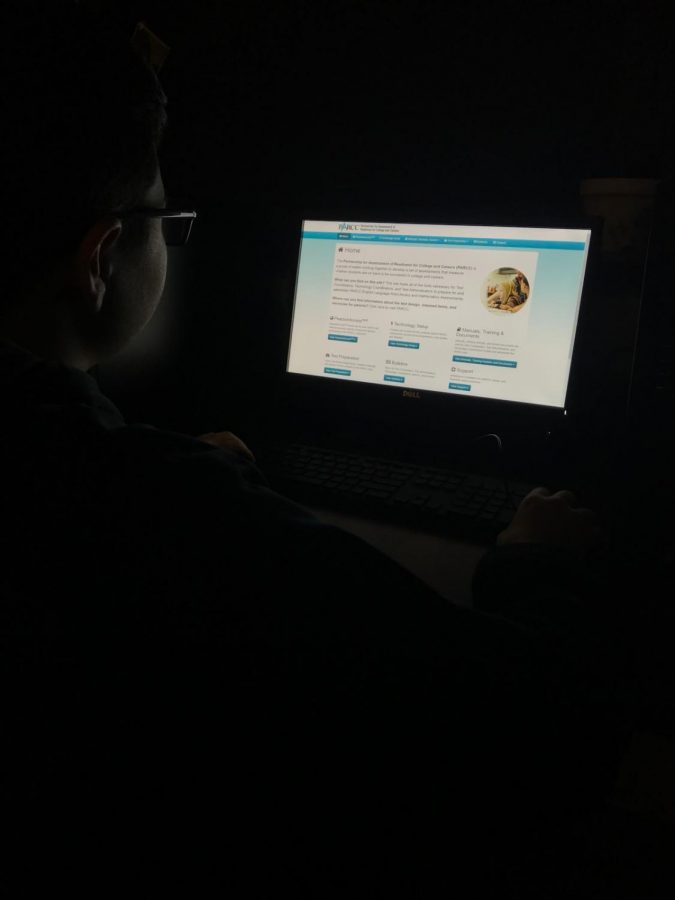 A student looks at the PARCC website during class to see what will happen to the test if changed by Governor Phil Murphy.

In August 2016, the Board of Education passed a regulation that the class of 2021 and all future graduating classes would have to pass the PARCC test to receive their high school diploma. This came as a surprise as many did not believe a highly criticized test should be a requirement for graduation.

The upcoming test this April will provide the state with reliable data to see how students are progressing. In the past, data was not as reliable as more students opted out and put less effort in the test because the PARCC wasn’t a requirement for the graduating classes of 2018-2020.

Governor Murphy promised the public for the end to New Jerseys reliance on the PARCC and the graduation requirement.

Murphy believes that students need state testing but said, “Good teachers and good students can have bad test days. Too much emphasis is being put on a single test, as opposed to weighing a student’s progress through years of instruction.”

Governor Murphy wants the state Department of Education to work with teachers to create an assessment that would meet national requirements be accepted by the public.

The test is still being taken by students because the Department of Education and Governor Christie signed a four year contract with Pearson.

Pearson is the British based company that created the PARCC. It has offices located worldwide, including one in Hoboken New Jersey. Pearson is a for-profit corporation that creates educational tools and tests for schools world wide. The company controls roughly 50 percent of all educational materials used by students across the United States.

The contract signed by Christie, which started PARCC testing in 2015 will end by the end of this year but if a replacement is not found then Pearson will have to still supply New Jersey with the PARCC for another year costing New Jersey more money. 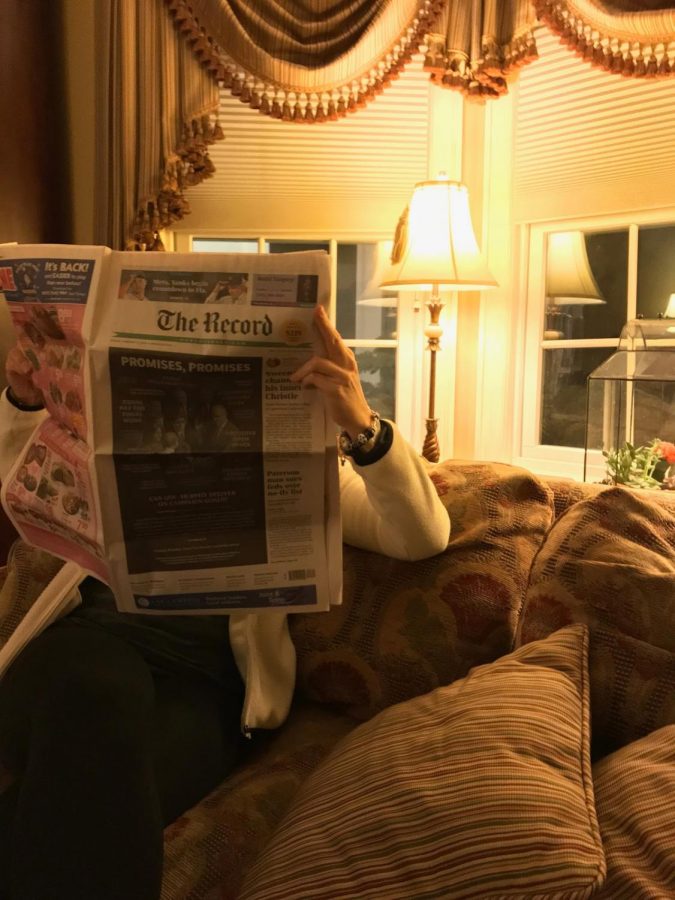 A parent reads an article about Governor Phil Murphys promises to the state of New Jersey including the end to the PARCC test.

When Governor Christie changed the NJASK to the PARCC, he had the best intentions for students. He and other state legislators felt that the NJASK was too easy and wasn’t challenging students enough.

However, The PARCC itself may not be around in a year or two depending on if the State Board of Education and the special committees will have the ability to find a new a exam and get it made in time for testing.

The Governor and legislators will take their time to find the best possible testing option for the students of New Jersey.

With all types of technology being created and innovated with new ways to use it, testing will always be in a state of evolvement. When the PARCC was created it lept boundaries by moving away from paper and pencil testing. The PARCC also introduced high level forms of thinking that teachers liked and hope will continue throughout the course of other exams to come.

Time is now of the essence and who knows what test students will be taking in the years to come.