The life of a cameraman 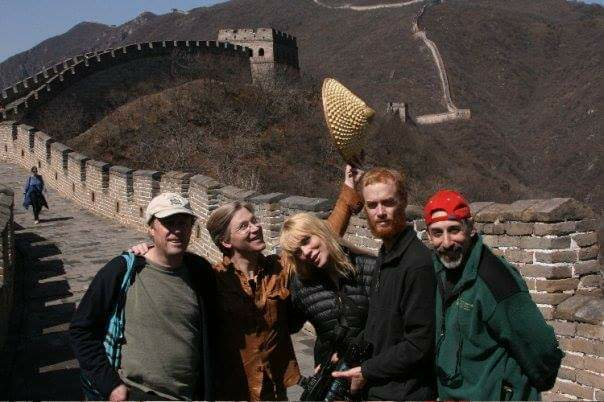 Brian and Ken, on the right, standing on the The Great Wall of China with the rest of the crew. Working on the German TV project was a thrill and a privilege for Ken.

Ken Kerbs is in Fort Lauderdale, a popular city in Florida known for its beaches, but he’s not there for vacation.

A couple of hours prior on Jan. 6. 2017, a man walked into the Fort Lauderdale-Hollywood International Airport with a Walther PPS 9mm semi-automatic pistol.

The man, Esteban Santiago-Ruiz, opened fire in the baggage claim area of Terminal 2. Hundreds of people just waiting to grab their luggages, suddenly had to run for their lives.

Panic spread to the rest of the terminals and law enforcement officers got to the scene as fast as they could, but in 80 seconds everything was over.

The trip to Florida is a long one. Ken’s flight gets delayed and he can’t use the Fort Lauderdale Airport because of the shooting. Instead, Ken arrives at an airport in Miami and has to rent a car all the way to Fort Lauderdale.

Ken finally meets up with the reporter he’ll be working with for this story. The whole trip takes around nine hours and when Ken and the reporter set up to start filming it’s midnight. The night sky is dark outside but the lights of the airport and runway are shining brightly.

Ken and the reporter stay a couple days after the shooting to interview doctors and employees all helping out. With them are reporters and videographers from 50 other stations all from different parts of the country.

After getting all the footage and interviews needed, Ken goes back home to New York only to start working on another story.

“You’re operating on little sleep, and you have a lot of deadlines,” Ken said. “That’s the life of a cameraman.”

As a videographer, Ken gets to be where the action is. He travels to places, in and out of the country, that an everyday person wouldn’t get to go to.

Eight years ago, while he was working for CBS, Ken took a 6 month leave to work for a German TV channel called N-TV. A financial journalist, Markus Koch, came up with a creative project and called it “70 Days Around the World with Markus Koch.” Koch was the executive producer of the show and had previously met Ken at the New York Stock Exchange.

“It was all about looking at emerging markets with an eye towards investment opportunities,” Brian Wengrofsky said. Brian is a freelance cameraman who worked with Ken on the project.

Like Ken, Brian was interested in photography, specifically making movies. Ken and Brian had also worked together before while working on a story about the New York Stock Exchange.

Although the economic show was about investing, it was also a travel show. The viewers, Ken, and Brian got to immerse themselves in the cultures of other countries.

At one point, Ken and Brian were in Russia.

They were doing a story on Gazprom, a Russian oil company. They needed to drive up north, around the Arctic Circle in Western Siberia.

Wengrofsky remembers it being the coldest place he’s ever been. He thought “who would ever want to live here,” when he recalled the -12 degree weather. But when they got closer to their destination they passed by the city of Noyabrsk. In the city there was an ice playground full of incredible sculptures and spires. All throughout the playground children ran around, having the time of their lives.

Seeing sights like this is what made all the travelling worth it for Brian. That and Ken serving as the backbone of the trip.

“He always had a positive attitude, he always had a solution in his back pocket if we got ourselves into some kind of jam,” Brian said.

Even Brian, who was a passionate cameraman himself, observed that Ken always had a camera around his neck. Even when Ken was recording audio and would carry a microphone and sound mixer on one arm he would have his camera on the other.

In every location they filmed, Ken and Brian would have at least a day off to go out and explore what the country had to offer.  In the 10 weeks, they got to travel to, Africa, China, India, Brazil, Vietnam, Mexico and Russia.

In Vietnam, Brian recalls tasting good food and meeting great people. The Vietnamese, according to Brian, are very resourceful. When they were filming a story about fish farms, they needed a tank so they could sink the camera below water. Ken and Brian’s driver brought them to a little shop that sold different types of glass and metals. By the end of the afternoon, the people working in the shop had put everything together in time for the shoot.

Another story was on a oil rig off the coast of Brazil. Brian remembers that there was also good food, specifically beef. Ken and Brian also saw a coffee plantation. In Ghana, the two went to a gold mine and saw the workers pouring gold into bars.

The process to film the show was fairly quick. In each location the crew would stay for about a week.

“The German project was an absolute dream. To travel around the world in 10 weeks to eight countries and have a great crew to collaborate with was amazing,” Ken said.

Both Ken and Brian agree that travelling to the different countries gave them a new perspective.

Brian learned of the small similarities between everyone, everywhere. Ken felt he had a better look at all the countries that had a much greater depth than reading a newspaper or watching a movie.

Ken travels at least 100 days a year. Whether it’s hopping a flight to a different country on the other side of the world or driving nine hours to another state, Ken can do all this because he chose to pursue journalism.

If Ken hadn’t gone into the field of journalism, he would’ve pursued biology and possibly become an environmentalist.

But Ken loved making images too much. He loves working on stories, learning from others and meeting new people.

Often times he goes into work not knowing what he’ll be working on but for Ken that’s the most exciting part of his job.

Ken finishes all of his assignments in little building blocks: one shot at a time. Looking through the lens, Ken tries to capture the moment and essence of the story as best as he can.

He couldn’t imagine doing anything else.

In the 2020 presidential election, residents of Glen Rock are more likely to vote for Democrat Joe Biden than Republican Donald Trump. However, the Gl...

Over the past few years, the Glen Rock Panthers boys’ varsity soccer team has seen great success on the soccer pitch. The 2018 season was arguably t...

Glen Rock High School started the 2020-2021 school year with a hybrid learning model. The model consists of two days — A and B— divided evenly amo...

Performative activism: how not to go about social media advocacy

In the era of social media, it has become increasingly common for users to utilize their platforms in offering support for various movements and cause...