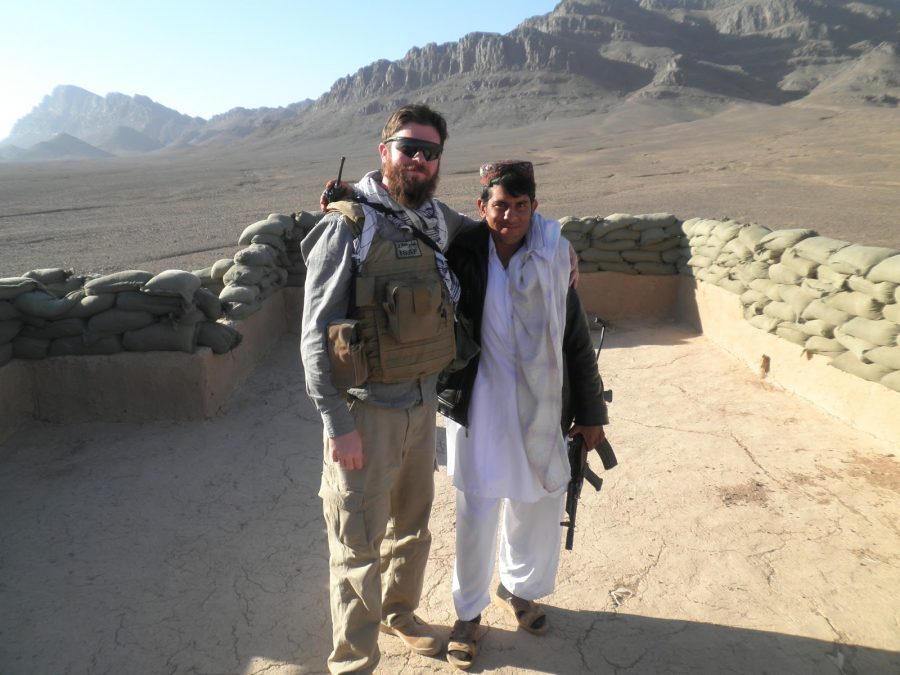 Overseas, soldiers have a sense of purpose — to defeat the enemy — and everyone shares that same goal. They deal with the fear and hardships of war with people who are going through the exact same thing. If anyone ever needs help, everyone there could relate.

The idea behind Team Red, White, and Blue was to take that feeling of comradery and bring it back to the United States.

Joe Quinn, today the Director of Leadership Development for Team Red, White & Blue, spent his first tour in the United States Army in Iraq from 2003-2004, his second in Iraq during the surge from 2006-2008, and then served in Afghanistan as a civilian advisor for General David Petraeus from 2010-2011.

His first tour was early on in the Iraq War, so he spent his days dealing with tactics, such as employing security and keeping track of flight directions and platoons. He was living outside in his vehicles, which consequently meant not getting adequate showers or food.

His second tour was during “the surge,” so it was more strategic. The surge was when former President George W. Bush immensely increased the amount of troops sent to Iraq in hopes to provide more security to Baghdad and the Al Anbar Province. He was working for the Reconciliation, a mission that aimed to turn Iraqis fighting for the insurgency into fighting for the government.

During this second stint, Quinn didn’t have to live in vehicles anymore; his living arrangements were more permanent now, as he was living in something soldiers call “hooches.” These areas are almost like mini-towns of identical buildings. They were very simple buildings, each one was rectangular and tan. They contained bedrooms, cafeterias, and channell halls (where Quinn and other soldiers spent their time when they weren’t working).

The soldiers became accustomed to the repetitive simplicity of this life, despite its many challenges.

At home, however, life is completely different.

The sense of purpose is gone. There’s not really a tangible goal like there is at war.

They come home and there is so much to do: go to school, get a job, and take care of family.

Yet there isn’t an overarching objective to work toward like there had been overseas.

Back home, veterans often feel left out and have trouble getting help when they need it because few can relate to them.

Formerly strong civilian relationships are often broken because family and friends do not understand why veterans are so depressed and angry. They try their best to be supportive, but they really cannot help. After coming home, veterans can have trouble reconnecting with just about everyone and become very lonely, which adds to the stress of the transition.

Returning veterans also tend to gain weight and become out of shape because they aren’t exercising everyday like they once were.

Everyday, 22 veterans commit suicide because of these factors, all all which lead to PTSD and depression.

When Quinn came home, he spent his first year alone at graduate school at the John F. Kennedy School of Government at Harvard University. He was separated from his family and was by himself for his first year back in the civilian life.

He was having trouble connecting with new people because no one around him was going through what he was, which just made his transition harder than it already was.

He missed his Army buddies.

He gained 25 pounds because he wasn’t exercising as much as he used to and had trouble sleeping.

A common anxiety for veterans is driving. Quinn struggled with this.

The most commonly used weapon in the Iraq and Afghan Wars were IED bombs, or improvised explosive devices. These bombs were placed roadside would explode out of the blue. Hitting potholes brought back memories of the IEDs and made it difficult to drive. When Quinn had to drive, he would stay in the middle of the road, but it still brought him a lot of anxiety.

Team Red, White & Blue tries to fulfill everything that is lost in the transition by connecting veterans with people that can relate and help them.