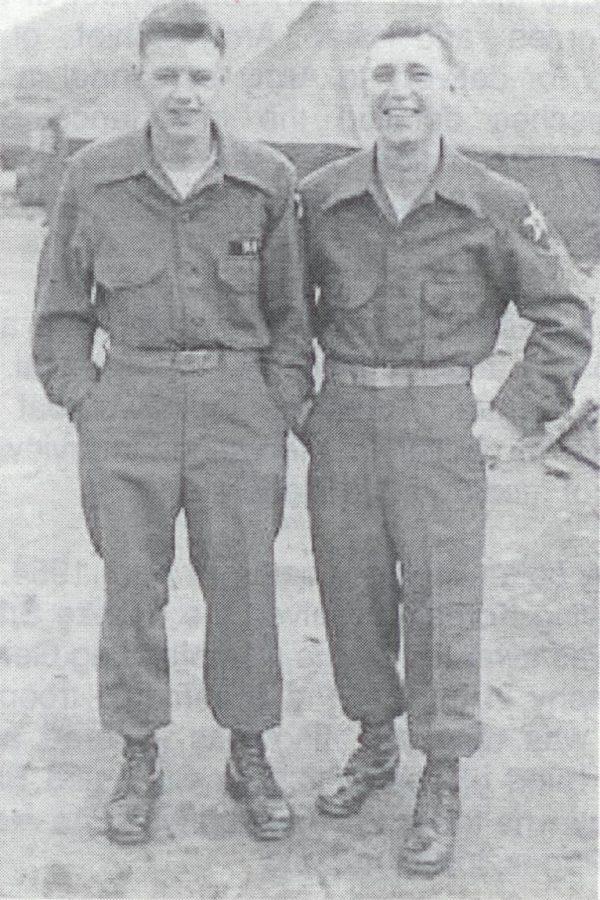 Ron Zier (Right) pictured at his locale near the town of Chorwon, Korea. On his left, Commander Roy Huff is pictured.

After graduating from Notre Dame University, Ron Zier immediately enlisted in the army and took naval aviation exams in order to complete his military service.

He passed his written exam, however, he mysteriously failed his hearing test, despite having perfect hearing. The idea of landing a jet going 150 miles an hour never really appealed to him.

Despite failing his exams, Ron Zier spent eight weeks at Fort Custer in Battle Creek, Michigan to take a basic training course designed for “non-combatants.” He then went to Officer’s Candidate School to serve as an officer in management and distribution of equipment.

Regardless of his best efforts to stay off the battlefield, in late 1952 Ron Zier was selected to be an infantry platoon leader in Korea. During his interview, Zier distinctly remembers telling the colonels that he couldn’t possibly imagine shooting anyone.

“Those gentlemen were so impressed by my aplomb that my orders sending me to Korea came within 24 hours. Who said the military had no sense of humor?” Zier said.

On Jan. 19, 1953, Ron Zier left for Korea. He was aboard a 17,000 ton merchant ship named the General Funston. The ship had been refitted as a troop carrier, making for very little space. Over the nineteen days it took to sail across the Pacific Ocean, Ron Zier worked as an editor for the the ship’s newspaper, strategically avoiding kitchen duty in an effort to avoid seasickness.  After a stop in Japan, the General Funston docked in Inchon, Korea on February 13, 1953. The troops traveled to the headquarters of the Second Infantry Division by train. At every stop, orphan beggars tried to get as close as they could to the train to feel its warmth, to beg for food, or money. When the men arrived at the headquarters, one could hear the sounds artillery and tracer bullet trajectories overhead.

Because he had writing and typing skills, Ron Zier spent sixteen months with a headquarters that handled writing medal citations and casualty reports. When he was considered to be in a combat zone, his pay was raised to one hundred dollars a month.

Although he was of a non-combatant status, Zier also handled his share of guard duty on the 2 a.m. shift, sometimes in negative 20 degree weather. Every snap of a twig or crack of ice made Zier jump with anxiety. Being alone proved to be paradoxically both alarming and assuring.

One evening, on guard duty, Zier was walking toward the farthest post, when a tent flap flew open, casting a beam of light in his direction. Seeing Zier and mistaking him for an enemy, a presumably drunk UN soldier fired his carbine gun at him. Zier dove as the bullets flew just above his head, hitting the ground chin first. He dove as soon as he saw the light, and his only injury came from the impact of his fall.

Camp was located a half mile behind the battle line, right next to the Chorwon River, which served as a bathing facility and a recreational spot during the summer months. They lived in eight-man tents with a single light bulb in the center, and coal burning stove for heat.There was an 11 p.m. lights out along with a  6 a.m. wake up call  In the winter, soldiers would take lukewarm showers in a tent with oil stoves. Some soldiers would make themselves useful by doing laundry or other household chores, granting them a few extra dollars along with a guarantee of three meals a day. When it rained, a river would run through their tents, but the men always had decent food and warm clothes.

Life in Korea, at least for Ron Zier, wasn’t horrible. There was a certain camaraderie among the soldiers. Zier himself started a tradition among the men. They would pass around a St. Olaf College t-shirt to the next person who was being rotated out of Korea and heading home. Possession of the shirt meant you were a “short timer”. The men celebrated Christmas of 1953 together. They cut down a small evergreen and decorated it themselves, and on Christmas Eve they traveled twenty miles from camp to attend a midnight mass, given by Francis Cardinal Spellman, New York’s Archbishop at the time.

Daily casualty reports were given to the soldiers and helicopters flew above them carrying wounded soldiers to Mobile a Army Surgical Hospital (MASH) nearby. Everyone carried a weapon, maybe two, wherever they went. Even to mass. One Sunday afternoon, a shackled prisoner armed with a rifle stopped the service and demanded that the priest help release him. He pleaded louder and louder, and threatened to shoot everyone, but no one moved. The priest finished the mass, and afterwards talked to the prisoner, taking the rifle from him.

Later in his military career, Ron Zier was chosen to write speeches that would be delivered to Army personnel stationed in Korea. The pieces were for General Maxwell Taylor, the commander of all Far-East Forces  acclaimed

In April of 1954, Ron Zier received the Bronze Star. The medal was given by the Commanding General in front of the troops. The ceremony was completed by the division band playing the national anthem as the flag being  lowered. That same year, Zier left the Army in Korea and took a ten day voyage to Seattle. After his discharge, Zier was able to fly home Glen Rock and put his adolescence and army days behind him.

“I had just turned 23. It was time to get on with the next act, start a new adventure,” said Zier.