Somewhere to grow up 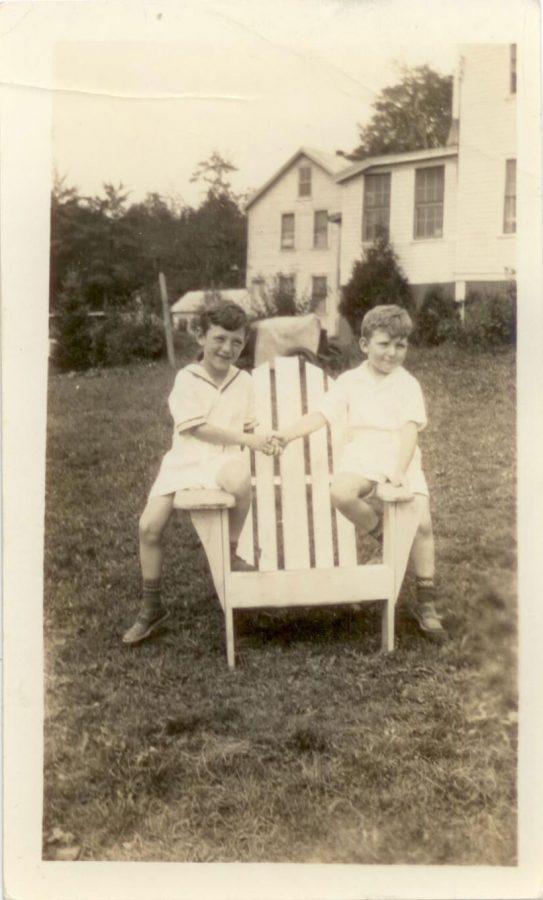 The Zier boys in the backyard of their Waldron Avenue home in 1941. Ron left, Bob right.

The family hired a builder, Fred Davenport, to build a brick colonial home on a quarter acre of farmland. The house consisted of three bedrooms, two bathrooms, a living room, dining room, kitchen, a screened porch, a deck, and an attached garage for a total price of $7,500. The house was built on a newly developed Waldron Avenue, which was yet to be paved, allowing for many mud puddles to jump around in. Behind the house was an abandoned apple orchard and a chicken farm where the neighborhood kids would have apple fights or used the fruit as baseballs. That land would later become St. Catherine’s Church in 1953.

Coming from a rural city almost 30 miles away, Glen Rock was a completely different world for the brothers. Instead of chasing each other through alleys and over fences, they were now surrounded by acres of farmland. Two working dairy farms on the east side of Harristown Road provided space for football games, and idle trolley lines were makeshift baseball fields. Both of the boys went to Central Elementary School for fifth and sixth grades.

Downtown Glen Rock was an important feature of the town, consisting of roughly two dozen stores, among them were Bill Francis’s delicatessen, Kaver’s and Newman’s candy stores, and Bill Merry’s hardware store. Other staples of the town still stand today, with a few distinct differences. Rock Ridge Pharmacy was then called the Village Pharmacy, Kilroy’s Supermarket stood on Maple Avenue rather than Rock Road, and the corner Bank of America was not always colored pink.

Ron Zier is able to recall his childhood memories in detail, including the geographical layout of Glen Rock, street names and addresses, however his strongest memories of the town are of the people who lived there.

“Middle class achievers who were proud to provide their kids a decent education along with acres of open space to wander through,” Zier said.