Educating the next generation 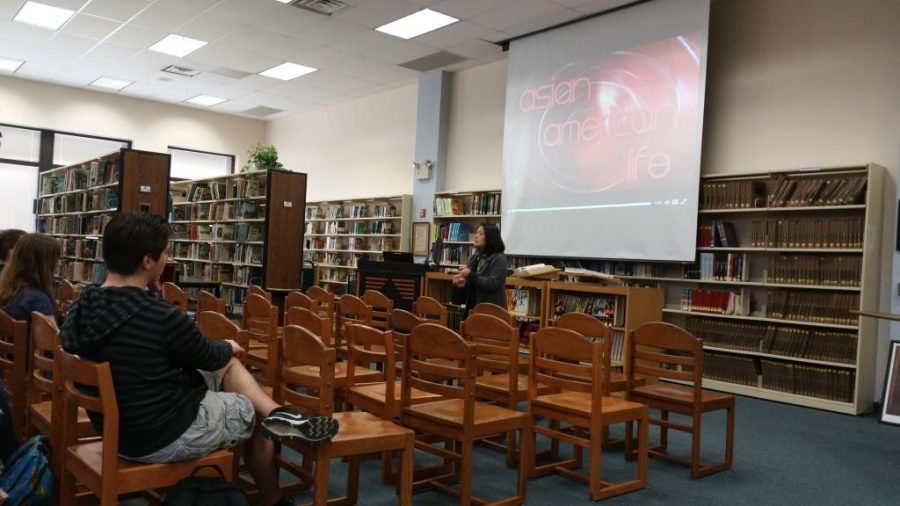 “Is she a comfort women?” A student asked his fellow peers pointing to the woman, Minnie Roh, at the podium as the boy walked into the Glen Rock High School media center to listen to her presentation.

Standing in front of the student-audience, Minnie Roh, a petite middle-aged Asian woman with short black hair dressed in mostly dark colors covered by a warm grey sweater, was prepared to deliver her presentation to a group of students who had hardly heard about comfort women.

As soon as the journalism and history students took their seats, Roh began introducing her segment about the sex slaves during World War II who are now elderly women fighting for recognition from the Japanese government, referred to as the Comfort Women.

After showing her CUNY segment, Roh said that, for the women and girls forced into servitude, “it was rape over and over again.”

Roh herself was not a Comfort Woman, she was not alive when the atrocities took place. But she grew up learning about the horrors of these women unlike many Glen Rock students who were not every aware until they watched her segment.

“How can you learn not to make those same mistakes again when you alter the history?” Minnie Roh asked at the beginning of her first of two presentations on Wednesday, March 9. “We don’t learn this very important part of history, even though it is a bad part of history. You have to learn the good and the bad in order to learn from it and build from it.”

History teacher Kathleen Walter teaches about Comfort Women because it “is still relevant in New Jersey because of the Asian population.” One of Walter’s students refused to watch the presentation while others were so interested that they contacted Roh with more of their questions.

In this particular case, they acknowledge that a crime has been taking place, but no one wants to hold them accountable because it happened so long ago.”

“If we can generate a discussion about that and perhaps have people interested in the history and social injustices of the past, it is just education and history that would help form your own opinions and thoughts about past wars and continued the discussion with future generations,” Lord said.

But, Japan is not the only country that tries to change history. For example, Oklahoma is not allowing any state money to fund AP United States History courses because the state excuses the curriculum of focusing on the negative like slavery and not praising the country’s triumph.

“I would like to see them do a little more internal review,” Walter said, referring to the Japanese textbooks. “Whether it is happening in Japan or the United States, it is happening.”

Most Japanese students are not taught about Japan’s wrongdoings, and the textbooks treat the events like a natural disaster, according to AP United States History teacher, Mrs. Kathleen Walter.

“The Japanese say it was just one of those things that was going to happen,” Walter explained. “You cannot avoid a tidal wave or an earthquake.”

Relating to her AP United States History class, Walter explained that it is not unusual for a government to apologize. Starting in 1988, President Ronald Reagan passed a Civil Liberties Act in which the country apologized for Japanese internment and paid each victim $20,000. President George Bush (Sr.) extended the apology by sending a government commission out to research how much money each person lost, so they could try to compensate more than $20,000 each.

Additionally, the Germans have apologized for the Holocaust.

“There are times when the world admits that crimes that taken place,” Walter said. “In this particular case, they acknowledge that a crime has been taking place, but no one wants to hold them accountable because it happened so long ago.”

It is just like the Holocaust or what is going on in Syria or anything going on right now. You can’t cover it up because if you cover it up and you just say nothing happened, it might feed other generations for history to repeat itself.”

Three American presidents (Bush, Clinton and Obama) acknowledged the existence of Comfort Women. Because Korea and Japan are both American allies, it is politically difficult to get involved when Japan does not want to recognize the issue.

“Why don’t the Japanese apologize?” Mr. Arlotta, high school principal, asked from the back of the media center.

Roh responded, “We have no idea.” She explained that the Japanese people are concerned about their image from World War II and are trying to ‘whitewash’ their reputation.

“It is just like the Holocaust or what is going on in Syria or anything going on right now. You can’t cover it up because if you cover it up and you just say nothing happened, it might feed other generations for history to repeat itself,” Roh said.

Along with the historical aspects of her segment, Roh also shared logistical journalism problems she had for the interested journalism students who attended her presentation.

“It was a great opportunity for aspiring journalists to hear from someone who has been successful in the field,” said Jason Toncic, adviser to The Glen Echo.

She said that she had trouble finding footage to show while she was speaking in her segment because there are not many photos from this erased part of history.

“I worked so hard to get historical footage that matched,” Roh said.

One person who saw Roh’s work ethic was Sam Shakya, one of the members of the Asian American Life staff.

“We are very compatible in terms of a working relationship. She has a vision and I can really tell what she wants to see,” Shakya, Roh’s editor, said. “I work with the sound, texture and picture, so people can see the turmoil that these women went through.”

With help from her team, she found “fair use” films and photos that are also shown in other Comfort Women features that she could legally use. Walter’s students recognized a photo of a group of a Japanese soldiers lining up in front of a comfort station from a film they watched in class produced by the Chinese government.

“By shedding light of this and saying these type of things happen, it will educate the next generation that this is a human rights violation that shouldn’t of ever happened and we should learn from it,” Roh said.