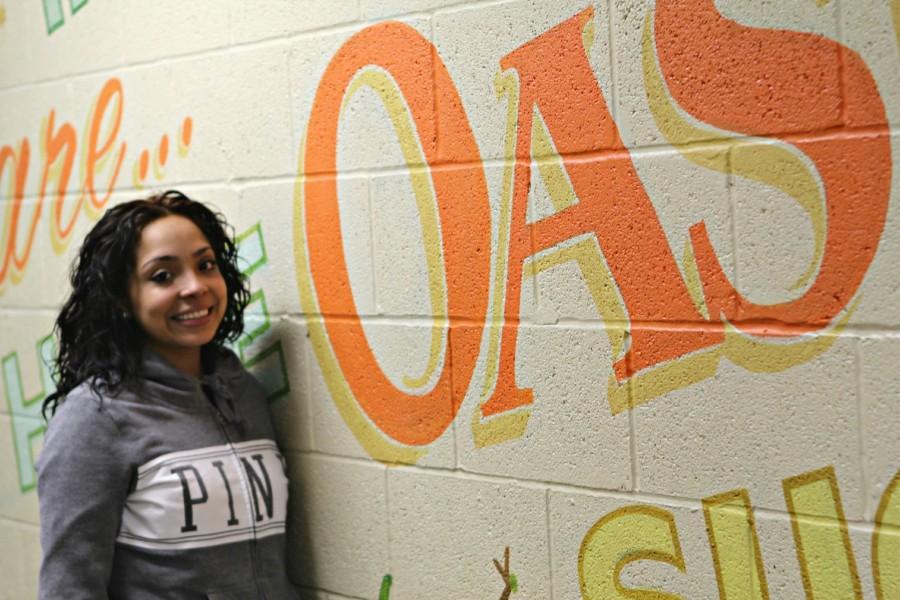 On a brisk Friday in November, as a winter chill swept the streets of Paterson, Jennifer Lindo’s life changed forever.

Lindo, a high school student at the time, strolled through the doors of Oasis, stopping only to stamp her time card as she slid her backpack off her weary shoulders. Succumbing to habit, she trudged two flights up the gray concrete stairs of Oasis. She walked briskly through the third floor hallway, passing the mural of inspirational words painted on the pale yellow wall.

“Jennifer!” a man bellowed down the hallway. Awoken from the daze of her routine, Lindo stopped.

Although Lindo didn’t know it at the time, this man would revolutionize her life nearly as quickly as it took her to punch in her time card.

The man’s name was Walter Ginsberg.

Ginsberg volunteers at Oasis and contributes to the organization’s GED program and aids in computer classes taught on Friday mornings. His warm face blends into the unique amalgam that is the Oasis family.

Ginsberg and Lindo had never been close, but it only took him eight words to begin a lifelong connection: “So, I heard you wanna go to college?”

“I wasn’t planning on going to college. I was planning on going into the military. I mean everything had changed that one day,” Lindo said. “I told him yeah, but then again I was like ‘I rather not. I rather just go into the military.’ So ever since that day everything changed. I changed my mind; I was like ‘You know, I’m here in this country for a good living, to go to school.’”

Lindo was born in the United States, but both of her parents are Peruvian.

“I do see the struggle that my family has to deal with over there in Peru,” Lindo said. “My mom always has told me that I should be glad and blessed that I’m here and that we’re able to have financial aid and things like that.”

Ginsberg approached Lindo at the right time, just as the chaos in her life was beginning to subdue.

Lindo had just transferred from John F. Kennedy High School, known in part for its students’ struggles. Students at JFK High School would continuously cut class and roam the halls in gangs, only to select an innocent student to beat right there in a classroom.

Lindo transferred to Silk City Academy, a small school in Paterson. Before transferring, she had struggled to keep up and found herself regularly in trouble and skipping classes.

“When Jim had seen my freshman year grades he was very upset and he said ‘In order for you to work here you have to bring up those grades,’ so ever since that I changed my grades,” Lindo said. “I was literally an F student and now I’m in Honor Society. I’m now one of the top people in my class with the highest GPA.”

Although she found herself improving drastically at her new school, the transition wasn’t easy. The summer going into her senior year, Lindo wanted to return to JFK High School.

Lindo never expected such a vociferous response to her desire to return to JFK High School. Her school principal and teachers at Silk City Academy exhorted to remain at the school.

“I never heard a principal tell one of their students, ‘Why are you leaving a school where you came from nothing to become an excellent student?’” Lindo said. “My teachers would say, ‘You’re not going to be in Honor Society at the school you came from. Why would you go back to a school you did horrible at?’”

Lindo realized that if she returned to JFK she would end up failing out of school. Without a GED she wouldn’t be able to hold a job or even enroll in the military, so she made the decision to continue her senior year at Silk City Academy.

“Now I actually love it [Silk City Academy], I love that school. That and Oasis changed me,” Lindo said. “The way I am now is way different than who I was before.”

Walter would hound Lindo for her GPA and report card.  He would continuously remind her that she would go to college.

For the first time in Jennifer Lindo’s life, though, she felt as though everyone was rooting for her.

“I felt the love. I fell in love with the fact I had wonderful people around here who pushed me,” Lindo said.

For eighteen years, Lindo had been doubted and denigrated. She was surrounded by people who told her she couldn’t.

“I was told I wasn’t enough. I wasn’t going to be anyone in life,” Lindo said. “I’m not going to lie. It was hard because when you have people doubting you it’s like you’re not worth anything; that’s how I see it.”

Principals and teachers disregarded Lindo because of her behavior and poor grades.

Even her father was guilty of overlooking her. He would regularly compare Lindo to her older brother. Lindo’s brother attended Passaic County Technical Institute in Wayne, an establishment regarded for its rigorous caliber of education.

“I will always feel like the one who wasn’t worth it. College made me look forward to proving my father that my brother is not the only smart one between us,” Lindo said.

As Jennifer began filling out applications, she realized that she wouldn’t have gotten this far without those doubts- those doubters. She became conscious of how far she had progressed and for the first time in her life she experienced a foreign feeling of pride.

A feeling made possible, in part, by Oasis.

On a snowy day in late February, Jennifer Lindo was awarded for her vigor.

Removing two thick envelopes from the hatch of her mailbox, Lindo ignored the sting of the cold against her skin and rushed inside.

She had done it.

Her love of children and experience as a counselor at Oasis has inspired her to study to become a special education teacher in the future.

“I like kids, that’s why I work with kids. When you’re with them you just forget about your problems and you focus on them,” Lindo said.

Lindo believes that her tribulations growing up only have strengthened her qualifications as an educator.

She hopes to use her life story as an example for children who aren’t afforded opportunities.

“I would love for them [the children] to hear my life story and what I went through to be who I am,” Lindo said.

As a special education teacher, Lindo will act as a mentor to children just as Oasis was to her.

Oasis has remained a permanent part of Lindo’s life for the past eighteen years, and the compassion of those who work there has allowed her to rise above the negativity in her life.

Lindo’s departure from Oasis has only now become a reality.

I’ve had them since I was a baby and they’ve seen me grow and now they’re seeing me move on to a new chapter in my life — a new beginning. Everything they have told me, the words, the speeches, I will just have to keep it in my heart.”

“It’s going to be hard because I will have no one on top of me. I’ve had them since I was a baby and they’ve seen me grow and now they’re seeing me move on to a new chapter in my life — a new beginning,” Lindo said. “Everything they have told me, the words, the speeches, I will just have to keep it in my heart. I might have to write it in a notebook so I could go back and see everything they told me. Because I’m not going to have them by me, I’m just going to have their words.”

And as for Walter Ginsberg, he will always stand as a representation of hope and the bearer of a new future to Lindo.

Lindo will be attending the College of Saint Elizabeth this fall.