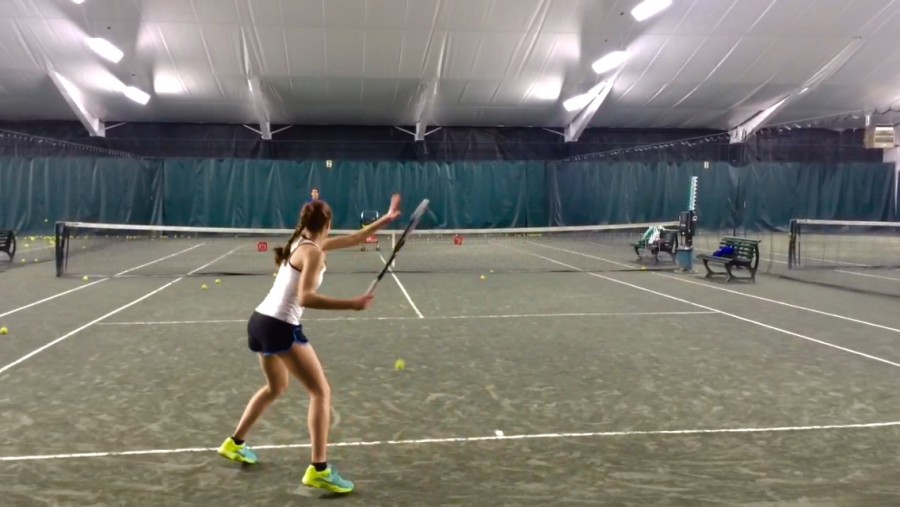 Over the course of each week, Mircea and her coach focus on her playing form. This is important because she needs to consistently be able to stand correctly when hitting so she could make shots at the best possible angles.

An 18-year-old girl steps on to the court. People automatically recognize her. With her white tennis shirt, white skirt, and black top, she jogs slowly, pacing herself. People are chanting her name, ALEX ALEX, yet she does not hear them. The only sound she hears are of the little tennis balls bouncing on the ground. When she faces the net, she sees her opponent. Her chestnut hair is pulled into a tight braid, giving her a full view of the court.

To her opponent, she may appear as Alex Mircea, one of the most successful high school tennis players in the state; to her family and friends, she is just Alex, a girl who has a passion for tennis and many other things. The 18 year-old was born on March 21st, 1996 in New York City. She lived there with her parents Elena and Alexander Mircea, until they moved to Glen Rock when she was 3 years old.

Although she has a passion for tennis, during her childhood she enjoyed swimming. Even though she thought this was her calling it all changed when she was 8 years old. Alex knew that her maternal uncle played tennis, and he offered to play with her. She was delighted and enjoyed playing but did not do much with her new appreciation until middle school.

During eighth grade, she began to practice tennis with her first instructor. During the summer before eighth grade, Mircea quit swimming. From then on, she started playing tennis more frequently and eventually decided to try out for the competitive team at the Tennis Academy in New York.

When  applying for a job or position at a company, there are many requirements and procedures necessary before starting tasks. During eighth grade, when Mircea tried out for the competitive team at the West Rock Tennis Academy in New Jersey, she immediately began mastering her skills to play in tournaments. This meant that her main priority was to start attending the academy’s  competitive program frequently.

She has an angel-like personality that makes it fun and interesting to work with her. It is difficult for her to be a hard worker and a fast learner, but she is a patient student.”

“For tennis, you really need to have a good program that you go frequently. At the Tennis Academy, the program is very vigorous because your coaches preparing you for tournaments and making you stronger,” Mircea said.

For Mircea, that person is Adrian Contreras, who has been a tennis instructor since May 31st, 1998. Since then, he has been working with over 60 students to improve their skills for future tournaments and matches. When he saw Alex play during tryouts, he immediately recognized her potential and invited her to start training with him.

Together, he and Mircea do many systematic exercises to prepare such as running, stretching, and hitting a lot of balls. Contreras believes that with hard work, focus, positivity, and confidence, students will be able to succeed and go beyond average tennis playing. The result of this philosophy, he says, is a player like Alex.

“She has an angel-like personality that makes it fun and interesting to work with her. It is difficult  for her to be a hard worker and a fast learner, but she is a patient student,” Contreras said.

Mircea decided to expand her training beyond the borders of the United States. In 2012, when Mircea first began training, she traveled to Bogota, Columbia to participate in a summer camp run by the West Rock Academy. At the camp, she practiced  and learned new techniques each day for 8 hours. Two weeks before the U.S open, Mircea met Novak Djokovic, who is the first ranked tennis player, according to the Association of Tennis professionals.

“ We got to watch him play during our lunch break and afterward we got to ask him questions and take pictures with him. It was pretty cool,” Mircea said

Since her freshman year, Mircea has been playing not only on the competitive team at West Rock Academy, but also her high school team. She has played the first singles position on the team since freshman year.

Alongside her is coach Bonnie Zimmerman, the longtime varsity coach of girls and boys tennis.

Zimmermann has been a coach at Glen Rock for 15 years. Although she began teaching girls’ tennis in 2007, she had been a coach for the girls’ volleyball team for six years. In 2010, she permanently began to coach the  girls and boys varsity tennis teams. She first noticed Alex playing at the courts in Memorial Park when she was in eighth grade.

Sometimes, one thing will work great and sometimes the next day it wont. It’s all about the experience.”

“We had just heard of this hard-hitting little girl, and it was really exciting to hear that she was coming to play at  Glen Rock,” Zimmerman said.

Zimmermann greatly admires Mircea’s passion for the sport. She says that everyday she is “hungry for new challenges” and looks forward to doing her best and getting the most out of her workout. Zimmerman also admires her aggressiveness, which causes her to hit winning shots.

Together, Mircea and Zimmermann work  to strategize  ways to improve her overall playing. Zimmermann spends time with Mircea to keep practicing the continental serving method and the second serve method.

“Its all about being competition-ready so she has the experience when she goes to play at college. Sometimes, one thing will work great and sometimes the next day it wont. It’s all about the experience,” Zimmermann said.

As well as being a confident player on the court, Mircea is also an optimistic player off the court. Zimmermann says that Mircea always attempts to help her teammates if they have questions about hitting and serving techniques and practicing with them.

“When she was with us, she would always help everybody if they asked questions. She was not somebody who would tell people what to do. She was always about playing more and figuring it out,” Zimmermann said.

Kai Mangino, one of the two co-captains on the team, has been a great friend of Mircea since seventh grade Mangino says that Alex is often giving her helpful advice and tips for better ways to play during single and double matches.

“She is a killer single and doubles player and we always take her advice. If she is ever struggling or looks frustrated, we try to stay positive for her and encourage her to stay positive,” Mangino said.

Mangino also says that they have made some great memories with Alex on the team. She recalls a time during the summer when they helped her perform the Ice Bucket Challenge and they hysterically started laughing afterward.

“That was one of my favorite team memories with Alex. We were just having a good time with each other,” Mangino said.

Besides great times with the team, Alex and Mangino have shared many personal memories with each other, plenty that were full of laughter.

“We have a lot of the same friends so we usually get together on weekends and just hang out,” Mangino said.

Even though Mircea has is attending college next year, she is not afraid about giving up her passion for tennis. In 2014, she accepted a tennis scholarship to attend Quinnipiac University and will continue to play tennis on their college team.

“ I am not considering to become a professional player, but I will continue to play tennis for the rest of my life,” Mircea said.

With seniors graduating, rising star athletes look to continue to excel in their place

With the school year coming to an end, many of the star athletes the school has grown accustomed to cheering for will be graduating.  This gives an o...

The spring season for sports is upon us. Athletes fill the sports lobby after school with lacrosse sticks, running shoes, and bats for softball/baseba...