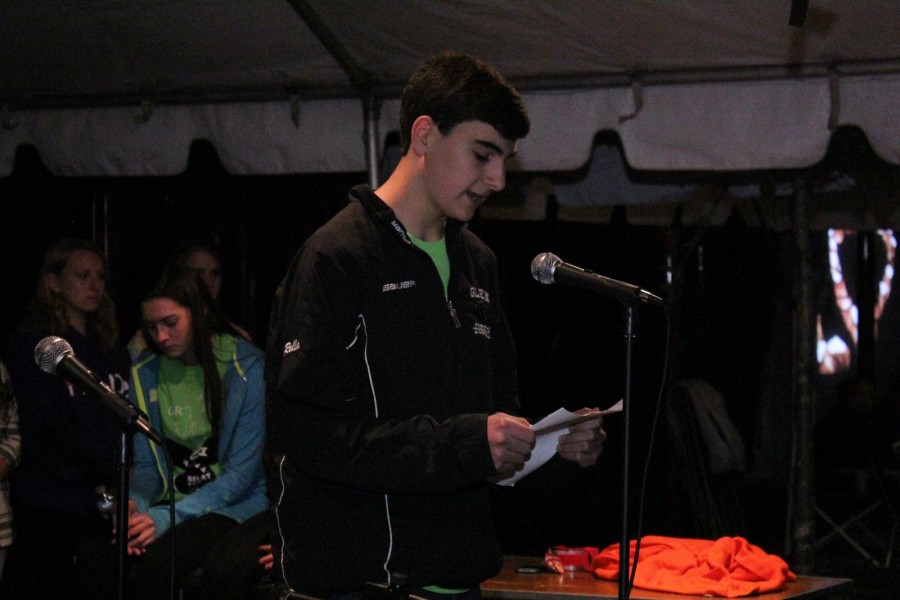 The early summer sun warmed the June air.  Happy birthday wishes barraged the young Matthew Rella as he walked the halls of Alexander Hamilton Elementary School.  As his classmates, preoccupied by hunger, made their way to the lunchroom, the boy heard a call on the loudspeaker. His dad was in the lobby waiting to pick him up, but he had no idea why he was leaving school.

The leather seats in the car burned from the long sheet of sunlight cutting through the windows as the pair drove home.  The sky was a cloudless diamond, clear and shining.  The rays of sunshine seemed to go on forever.  No horizon.  No depth.  Only clear blue.

Whenever I picture her, there is just that one day that I always go back to. I don’t know why. It’s just the first images that pops up into my head.”

As they pulled into the driveway, a woman was waiting in doorway.  She wore a black long sleeve shirt and black dress pants with a shawl wrapped around her shoulders.

“Matt, I hope you have a Yankees jersey and a hat,” she said, holding out two tickets to a Yankees game with an infectious smile on her face.

“My dad and I were just talking about how in her last few months how she was different and that’s not how we would remember her,”  Matthew Rella said to me as we sat in the high school media center.  “Whenever I picture her, there is just that one day that I always go back to. I don’t know why. It’s just the first images that pops up into my head.”

Joan Rella suffered from breast cancer, the same disease that affects thousands of other American women every year.  In 2015, thus far, 231,840 new cases of invasive breast cancer have been found in women.  That number is growing.

Yet despite the disease, she never lost her sense of hope.

“Her outlook, her look on things never changed. She was always so positive,” Rella said.  “And then she started losing her hair, and she started physically changing.”

“She didn’t have as much energy.  She’d have to be on the couch or the bed for a really long time and she was never as talkative, but she’d always be positive.  When she could barely talk she’d still be like, ‘Oh I hope you’re excited I think we’re going to Florida this summer,’ or like, ‘It’s nice and warm there.  We’re going to go to Universal.’  She was always so positive.”

A 1978 graduate of the Fashion Institute of Technology in New York, Rella’s mother found solace in fashion.  She worked in the city and started her own company, Joan Rella Designs, LLC of Glen Rock, which specialized in personal interior design.

Not surprisingly, the sewing room in the Rella household was filled with character.  Three sewing machines punctuated the room.  Fabric was draped all over: cotton, silk, rayon, woven blends.  Behind every corner, there was another roll.  Deliveries would always find their way up to that room.  An organized chaos, one might call it.  She knew exactly where everything was but no one else could pin-point the location.

A familiar scene might depict Rella’s mom sitting focused, eyes trained on the project ahead of her.  The needle bar is driven up and down, puncturing the fabric each time to create a new stitch.  A glass of red wine rests next to the machine — red wine was always her favorite.  In the background, Bruce Springsteen’s “Born to Run” is playing softly as sunlight seeps through the window, guiding her hands and machine as they move together in sync.

“She loved what she did; she was always working, but she always found time for everyone else.  Do everything to clean the house and cook dinner,” Rella said.  “I don’t know how she did it.  Always made time.”

“We used to go to San Diego every summer to see my aunt and cousins,” Rella recalled.  “My mom loved everything about San Diego.  We were on a hiking trail and there was this giant rattlesnake and my mom got so scared.  She was like, ‘Oh my God!  We have to leave!’  And then I think like a guy scared it off and she like freaked out.  We went back to my aunt’s house  and she was like hysterical.  She was like screaming and stuff and my dad and I were laughing and we were like, ‘Oh it’s just a snake!’”

She would show up fashionably early before the mass crowds arrived, mingling with old and new faces.  She beamed with pride as she introduced her children to everyone who crossed her path.  As the afternoon sky transformed to dusk, the bright orange patches stand out against the grey clouds.  The silhouettes of the trees are outlined in the sky as the light percolates through the branches.

The overnight experience of Relay is meant to parallel the physical and mental effects of cancer.  The setting sun symbolizes the climactic moment when a patient is diagnosed with cancer.  As the hours dwindle on, relayers begin to feel tired, which correlates with a patient experiencing the impeding tribulations of treatment.  Once the sunlight breaks through the night sky at dawn, it symbolizes the near end of treatment and when the morning sun is effulgent, the end of treatment has arrived and life goes on.

The first year after my mom died. It was probably two months or so after she died in sixth grade. That one was definitely the worst and the toughest emotionally.”

“It was always a difficult day for her because of the ceremony, but I think she was also happy and fortunate to be a part of it and happy to see everyone and how effective it was,” Rella explained.

Although Relay for Life is there to instill hope in individuals and to honor the joyous times, sometimes it can be emotionally draining.

“The first year after my mom died.  It was probably two months or so after she died in sixth grade.  That one was definitely the worst and the toughest emotionally,” Rella said.  “I remember crying more than I’ve ever cried.”

As Rella stood in the midst of the luminary ceremony, his dad came over and embraced him saying, “We’ll get through this.”  People that Matt had never met before came up with tears streaming down their faces offered their condolences and asked if they too could give him a hug.

The universal support exhibited at Relay for Life is what makes it so special for families such as the Rella family.  It is the night where unity can overcome cancer.