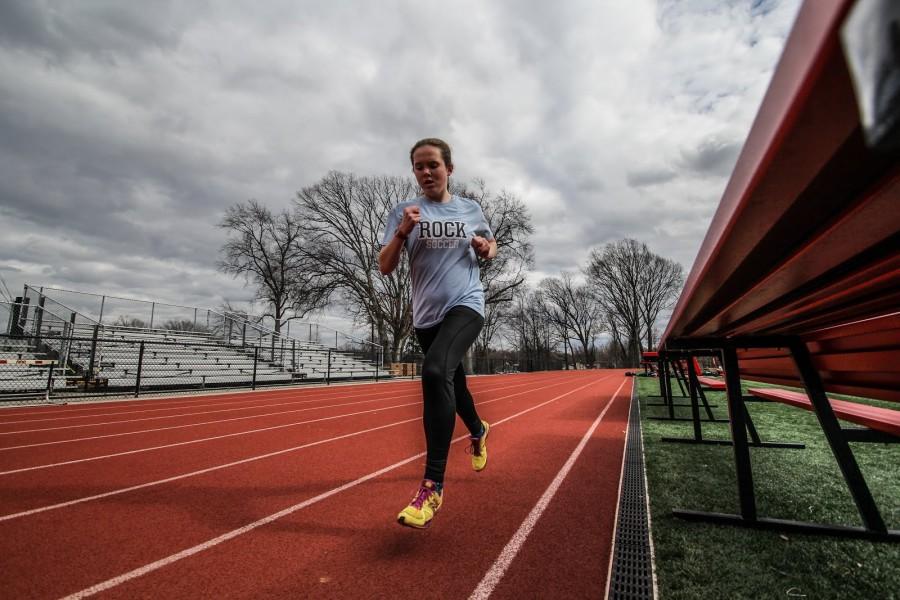 As a dedicated athlete, Jean plays both soccer and runs track, putting extra effort into every game and every meet.

At seven years old, Jean Walter would sit in a chair and watch as chemicals dripped into her.

Her mother, Kathleen Walter, wanted to do anything she could to make the experience more tolerable.  She would allow Jean to play video games, even though she was normally “pretty strict about using video games and iPads and electronics.” Jean played the Hannah Montana handheld video game because, at the time, Hannah Montana was Jean’s favorite.

During one of her treatments, Jean was playing her video game and waiting for the chemotherapy to be over, when she looked next to her. The girl sitting beside her was there for the same reason as Jean: chemotherapy. She looked to be about nine years old and it turned out that the girl, Brianna, also enjoyed Hannah Montana. Jean and Brianna started to form a friendship and would play the Hannah Montana video game while they both sat in the same chair every week.

While Jean and Brianna bonded over their shared love of Hannah Montana music, both girls moms noticed their daughters’ growing friendship. Kathleen remembers one day, when she was worrying about her daughter, that Brianna’s mom was also having the same reaction. Kathleen started talking to Brianna’s mom and also started her own friendship.

Kathleen describes Jean and Brianna’s friendship as a way “of looking to entertain each other through the hours that you have to sit there and let the chemicals drip into you.”

Jean’s chemotherapy treatment was every Wednesday afternoon and each week she was able to play the Hannah Montana video game with Brianna. The times with a friend helped to make the pain a little more bearable for Jean and the rest of the Walter family.

As time moved onward, Jean started to take control of her own treatment.

After most patients’ treatments were over for the day, nurses would pull out the needles. Jean, on the other hand, would refuse to let the nurses pull out her needles.

Instead, Jean would pull them out herself. For Kathleen Walter, watching her daughter pull out her own needles after chemotherapy was “weird to watch,” but Kathleen believes that these types of experiences that Jean had to endure as a child allowed her to become a stronger person.

To her mom, Jean is one soccer player “who hits hard, bashes in and has no fear about plowing into people.” The same applied to her treatment.

Jean would still do her schoolwork, whether she was at home or in the hospital. Many times her hospital bed was cluttered with books and worksheets.  One of Jean’s goals when she had her chemotherapy treatments was to never miss school on Thursday since her treatment was every Wednesday. She never missed a Thursday.

She was always excited to see what new books I would bring along for her to read independently.”

Eileen Besser, a teacher in the middle school and “best friend” to Kathleen, would give home instruction to Jean. With help from Eileen Besser and her motivation, Jean was always in higher level math classes and in the gifted and talented program.

“She was always excited to see what new books I would bring along for her to read independently,” Besser said. Besser’s daughter also lent Jean some of her books.

When Jean wasn’t in the hospital or getting tutored by Besser, she would spend time with her sister, Alex.

In first grade, Jean and Alex both believed “that wheelchairs were the coolest things around.” When Jean was in her wheelchair, the two sisters would play a game called Super Mrs. Wheelchair. Alex would wheel Jean around and together they would fight “bad guys” on the patio of their backyard.

A couple months after Walter’s port catheter was removed, she finally started to feel better and recover from LCH. Although her recovery was long, Kathleen remembers that Jean “popped back very quickly.”

In second grade, the whole Walter family all bonded together to help Jean through the experience. Kathleen, Alex, and Casey (Jean’s younger sister) all cut their hair short so that if Jean’s hair did fall out, a side effect of chemotherapy, she would be just her family members. Luckily for Jean, her hair never did fall out.

Patients who undergo chemotherapy will sometimes have their white blood cells destroyed, so Jean had to be given different medications to rebuild her immune system. With her fragile immune system, the Walter family had to be careful to not bring germs home from school. Even common illnesses, like a cold, could have had horrible effects on Jean.

One of the medications that Jean had to take had a side effect called “pan face.” This side effect caused her face to swell up, but, fortunately for Jean, her face returned to normal quickly.

At the time, Kathleen had no idea on how to run the program but because she knew it was for a good cause and since the American Cancer Society provided Jean with support when she was in the hospital, Kathleen kept on running the program.

“It just kind of grew into a life of its own,” Kathleen Walter said. Since then, she has been the Relay for Life club advisor for six years, has run Relay for Life for the entire town of Glen Rock, and is included in the Teachers Relay for Life. Whenever there is a fundraiser in town, Kathleen is one of the first people to participate. Kathleen feels that her work with Relay for Life is her way of “giving thanks back” and “keeping karma on the positive side.”

Balancing everything that went around Kathleen was hard; being a coach, teacher and a mother. There were times when Kathleen barely got any sleep.

Today, Kevin and I never let the kids play a sporting game without one of us there.”

Many times when Jean was in and out of the hospital, Alex wouldn’t get as much attention as she should have.

At the time when Jean had her first surgery, Kathleen had been coaching Alex and Jean’s softball team when the sisters were in first grade. Yet because Jean had to go to the hospital many times, Alex would be dropped off at the softball game, by herself.

“Today, Kevin and I never let the kids play a sporting game without one of us there,” Kathleen said.

It has been two years since Jean’s last checkup and since then Kathleen Walter believes that her daughter has recovered 100 percent. For five years, Jean had to go through multiple MRI’s and treatments but now the fourteen year old athlete is an extremely healthy and happy teenager.

Kathleen and the whole Walter family are especially thankful that Jean is healthy because their daughter “made it through” her illness.