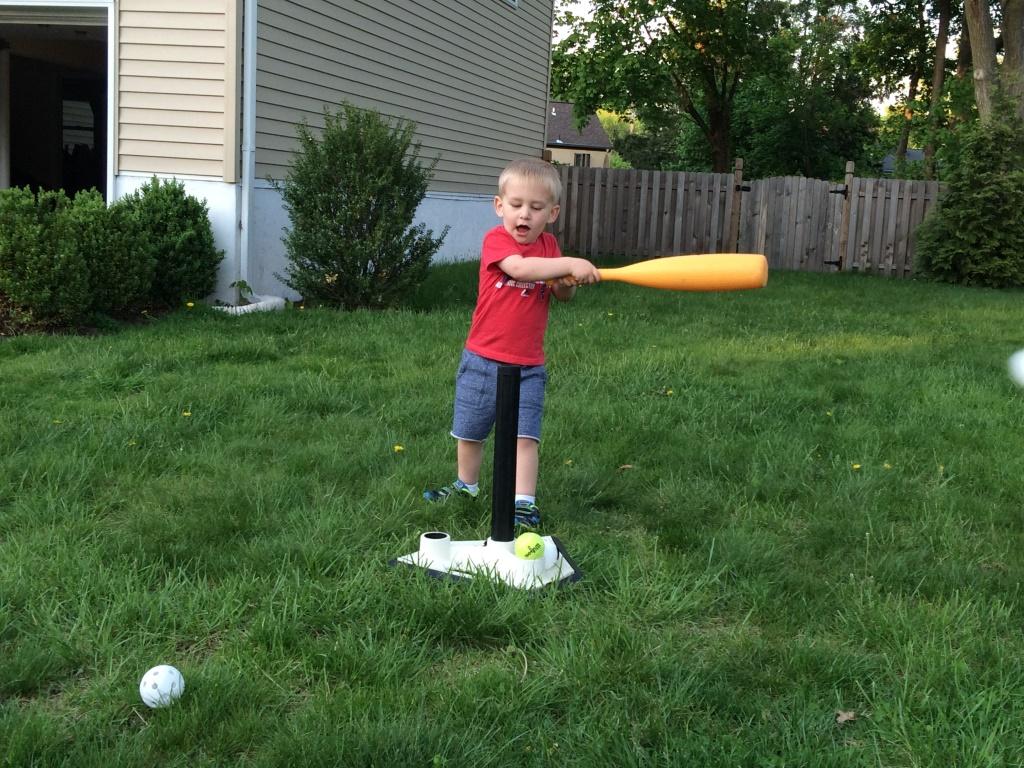 Charlie Hessenthaler is out on a nice day playing T-Ball. Charlie will be going into kindergarten in two years. (Photo Credit: Jeff Buckwalter)

Charlie Hessenthaler is out on a nice day playing T-Ball. Charlie will be going into kindergarten in two years.

Another grade of full day schooling

On September 2, 2015, new kindergartners will go into school with a new schedule and a full day ahead of them.

For the past couple of months, Board of Education meetings, Facebook debates and administrative discussions have focused on the topic of full day kindergarten.

Moger puts everything she has into her job here in Glen Rock, giving 110% all the time.

“I love teaching at Coleman. I am very proud to be a part of Coleman School,” Moger said.

Yet, surprisingly enough, teaching kindergarten was not her first choice.

“Actually my first choice when I first started working was to work in the disabled population. In High School and College I worked in camps and I worked in group homes all throughout college,” Moger said, “All my student teaching was done in upper grades from fourth through eighth grade, and then when I first graduated I was hired to teach four year olds in a public school system. And then I moved to teaching preschool special needs students and then I moved to teaching kindergarten.”

For Moger, there were pieces of the half-day schedule that she truly enjoyed.

“I am the person in the building that gets to know everyone. I get to know just about everyone that has been in Coleman and I get to know their family and I love that,” Moger said. “That is the part that I enjoy about the current schedule the most.”

Kindergartners have a lot on their plate going into their first year of the Glen Rock Board of Education School System. They will need to learn how to manage kindergarten.

“Many of them attend a kinder plus or another enrichment program for the second half so I don’t think it is too much for them.”

As I was talking with my former teacher, I remembered when I was in kindergarten and going outside for recess.

Going into the new full day schedule, there are going to be a lot of question marks that will not be answered until the new school year actually starts, so there will be a lot of speculation until then.

Moger, however, is optimistic.

“I think that they will do beautifully with it. The first time I taught when I taught the four year olds, that was in Montclair in the public school system, and they had a full day schedule then. They were pretty engaged every single day,” Moger said.

Yet will the new system transfer over to Glen Rock?

“I have never taught full day here at Coleman, but I am thinking they are going to do a beautiful job with it. I am really excited for it,” Moger said.

With a new schedule, the teachers now will need to adjust their curriculum to fit the longer day.

When asked about managing the new schedule, Moger said, “I think that at first you need to know that there is a committee of administrators and teachers that are developing a schedule and we are looking at the curricular expectations and then we are looking at the pieces of socialization and really the big part would be what we are teaching and how we now get to reinforce it.

Many people were against the idea of full day kindergarten, but Moger was all for it.

“I fully support the idea of full day kindergarten. I think while we can teach the curriculum in a half day program, I think this gives children the opportunity to experience the curriculum in multiple ways, so I am not just presenting a lesson. I am presenting a lesson then I am offering enriching experiences and offer reinforces. I think it is going to be wonderful,” Moger said.

While talking to Moger, she brought up what it took for full day kindergarten to get passed, and it was clearly a very complicated process.

“We looked at research, we visited programs, reviewed current curriculum and the Board of Ed hired a consultant to look the enrollment projections, so the county comes in and does a facility report to make sure the facilities can handle the idea

“The subcommittee that looked at curriculum made it a pretty thorough process.”

Moger also said that, “It appeared that everybody on the committee supported the idea.”

In the end, Moger believes that “the kids will thrive in a full day program.”

Talking to the Parents

A full day program will be new to them since they currently attend the community school in Glen Rock where Charlie attends for two mornings a week for three hours and Theo is in the “Mom and Tot” program for an hour and a half for one morning a week.

Like many others, Hessenthaler heard about the idea of full day kindergarten in the paper, online, and from talking to people around town.

“I think everybody is kind of mixed. I haven’t met anybody that is specifically one side or the other.” Hessenthaler said.

As I spoke to Hessenthaler, who lives next door, in my family’s living room, I saw her son Theo playing with train tracks and watching The Polar Express.  I wondered what he would be like in a full day program.

Charlie soon came into the room and asked me to play trains with his brother and him. Charlie started to lecture me about all the different types of train and tracks, he knew everything a kid could know about trains.

Hessenthaler is ambivalent on whether she thinks full day kindergarten is a good idea for her children.

“I think I am kind of mixed because I kind of feel like some kids are too young for a full day kindergarten schedule and other kids would be able to handle the full day schedule and it wouldn’t bother them that much,” she said. “For me, as a full time working parent, I think it probably makes it harder in terms of finding child care.”

When it came to her children, Hessenthaler said that she doesn’t know how her kids will handle full day kindergarten.

“It is just hard to imagine now when your kids are still taking naps. It is hard to imagine them not taking naps, but I guess at that point we will see,” she said. “I just think it is a long day for that age but on the other hand the year after kindergarten they have to do it so we will see.”

Glen Rock resident Alice Maloney,though, is all for the idea of full day kindergarten.

She has two kids, as well. Marshall, who is four and a half, will be in the first class to use the new schedule in September. Her other son Spencer is two years old and will be going to kindergarten in three years. Both of them attend a daycare from 8:30 to 5:30.

Maloney is a very busy mother, working a full time job with not much time to spare. She has not been able to attend the meetings on full day kindergarten.

“I haven’t been able to go to meetings; I think that is probably part of the issue. A lot of the parents who really want full day kindergarten are working full time, and we just don’t have a lot of time to spare. I don’t have time to go to meetings because I am working, but I have been involved with it over Facebook,” Maloney said.

As I was talking to Maloney, I heard her older son Marshall run into the room and ask his mom how to do a homework problem. After he sat next to me on the couch, he started to show me how to play with his toys.

Maloney said that the internet helped her be involved in the discussion over full-day kindergarten, even though she was too busy to attend in person.

“I have talked to people over Facebook and in just a general Facebook moms’ group and I have asked them if their kid is in full day kindergarten and how they feel about full day kindergarten and 99% of the people I talked to said they loved it. The people I talked to said it is much easier for the kids to learn what they need to learn during a full day instead of a much stressed out half day,” she said.

When I spoke to Maloney, the decision had not yet been made to switch to full day kindergarten.

The original timetable was that the Board of Ed was going to “table the vote until this October which would make it too late for Marshall since he is going into kindergarten this September,” Maloney said.

“It would be my fondest hope for them to have full day kindergarten by the time he is ready to go this fall,” Maloney said.

The full day kindergarten proposal was passed and will start in the fall on September 2, 2015.