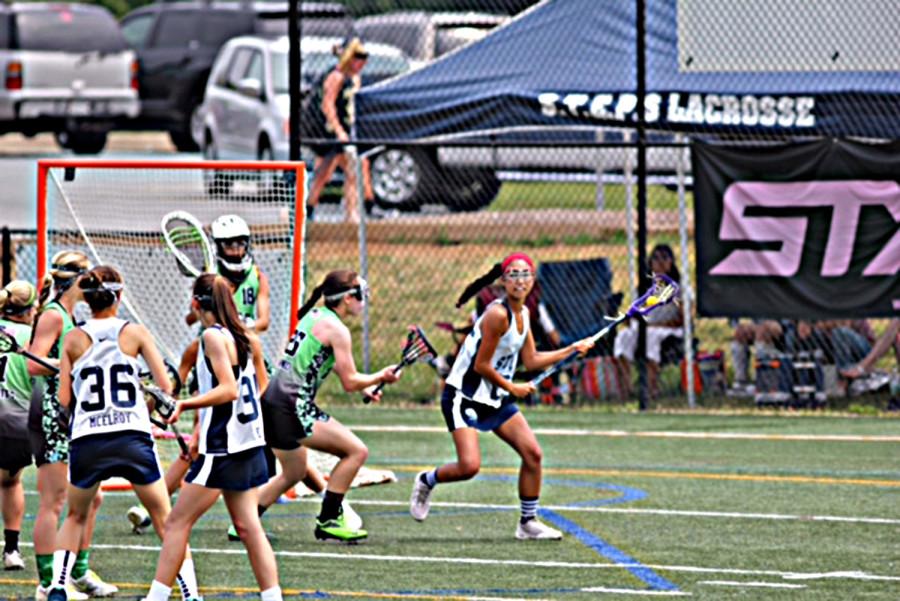 Outrunning her opponent, Alex Beilman breaks down the sideline.

Beilman was ready. She had finally recovered from her ACL tear, and had the green light to return to sports. Her first game back was a tournament at Rutgers University. Everyone around her, including her parents, her coach, and her teammates were nervous. But Beilman was thrilled. It had been too long that she was cooped up, and she had been anticipating this moment for months.

When she finally stepped on the court, everyone held their breath. In the first play, she was running and tripped, sending a wave of fear through the crowd. Everyone was frozen at the sight of Beilman on the floor.

But Beilman just stood up, dusted herself off, and said, “Yep, I’m good!” This little incident made her realize she was going to have to work on her balance. But she was not shaken; she was ready to get back in the swing of things.

Taryn Tabano was sold from the first time she met Beilman. It was shortly after Beilman had healed from her injury, and she was weeks into her eighth grade lacrosse season. The then assistant varsity coach of Glen Rock High School’s girls’ lacrosse team, Taryn Tabano, was talking with the head coach, Karen Mackie, after a game.

Karen pointed out Beilman on the field, practicing her shots. She told Tabano of Beilman’s great talent, her commitment to the sport, and how she would be an incoming freshman the next year.

Beilman came off the field and was formally introduced to Tabano. The athlete explained that she had just finished a game against Ridgewood, and she had missed some right-handed shots, so she had been practicing taking shots right-handed for the past two hours.

Tabano admired Beilman’s “sheer devotion to physically go out and practice that one thing… that she couldn’t rest until she got [it] out of her system.”

This is the same story that Tabano, now the girls’ head varsity coach, would tell a few years later to college lacrosse coaches when Beilman was being recruited.