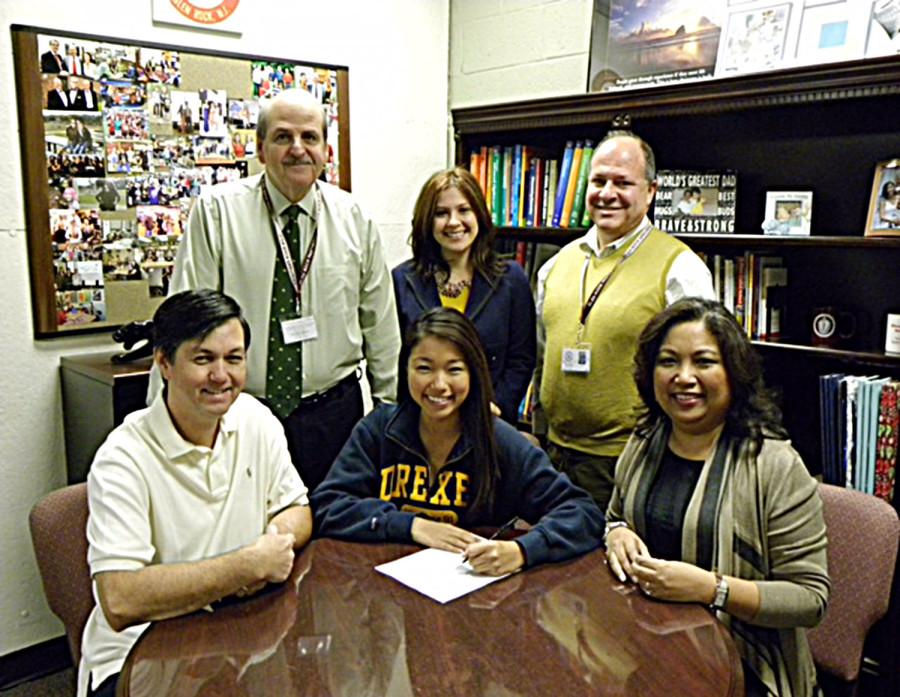 As a junior, Alex Beilman signs with Drexel University for the 2014-2015 school year.

Beilman’s freshman year in lacrosse, Glen Rock played some very difficult teams. According to Tabano, they were “playing programs like Mountain Lakes and Ridgewood… basically teams that don’t have a single player on the field that isn’t going to a top ten Division 1 program.” Glen Rock High School’s program, on the other hand, consisted mostly of underclassmen.

It was a difficult year for the program, but it turned out to be a winning season.

Although the season was tough for everyone, it was especially tough for Beilman. She had missed so much during her injury, and now she not only had to transition back to playing in general, but she also had to come back and be ready to play on a high school level. This was going to be hard, physically and mentally. But that would not stop Beilman. She just remembered one of the many inspirational quotes her mother had told her when she first tore her ACL: “The struggle you’re in today is developing the strength you need for tomorrow.”

In the summer, she played lacrosse for a club team called Steps Elite. She spent hours training, trying to get better.

And that’s exactly what she did.

Beilman’s sophomore lacrosse season was like something from a movie. Tabano remembers one particular instance that she considers to be Beilman’s break out game. It was a game against Indian Hills and Beilman was ‘on her game.’ She had half a dozen goals and a few assists as well. Her showing was so impressive that it prompted the Indian Hills coach to approach Tabano and ask, “Who is this girl? Where did you get her from?”

From then on, Beilman was a top player in the county. By the end of this break out season and in the summer following it, she realized that playing lacrosse at a higher level was a possibility. More than a possibility—it was likely. College coaches began to watch her at tournaments and even communicated with her over email.

She had inquiries from Boston University, Drexel, High Point, Muhlenberg, Quinnipiac, and Trinity. Beilman spoke to a lot of colleges overall. It was an exciting time for her and one that showed her what a bright future she could have.

Although in middle school Beilman had realized that she was not tall enough to play basketball at a higher level—she stands only 5’5”—and had written it off, she was discovering that lacrosse was a different story.

In fact, things were quite the opposite in lacrosse. “She uses her size to really manipulate space, which is so important as an attacker. And she has a great shot,” Tabano said.

As Beilman’s junior year began, she started to do more research and try to get a better idea of what she wanted to do. Midway through the year, she started to lean towards Drexel, not only because of the Division 1 lacrosse program, but also for the academics. The school has a great science program and, additionally, has its own medical school. Beilman found this very attractive, as she might want to go into the field of medicine.

She brings everyone together. She always knows what to say.”

The academics with the great lacrosse program make it “the best of both worlds” for Beilman.  She loves the lacrosse coach and said that, when she visited, all of the girls on the team were very inviting. All of this was a perfect fit for Beilman and made her decision to commit easier.

It was a unique position for Beilman to be in; as a junior, she already knew where she would be attending college. While her classmates were worrying about SAT scores and college visits, Beilman had the opportunity to sit back and appreciate the fruits of her labor. This did not mean that she would take it easy for the next year and a half; it was not in Beilman’s character. She continued to work hard in sports and in school, as she had done all her life. She even earned the honor of being named an Academic All American.

At the end of her junior lacrosse season, she was been named as one of the captains for the Glen Rock High School 2014 girls’ lacrosse team.

Her peers and coaches describe her as a quiet, effective leader. Elise Doubet (‘14), who has been playing lacrosse with Beilman for years, said, “She brings everyone together. She always knows what to say.”

Tabano admires how Beilman leads by example. “She doesn’t lead in that vocal rah-rah way all the time; she’s always there to be uplifting and to use her voice to empower her teammates,” she said.