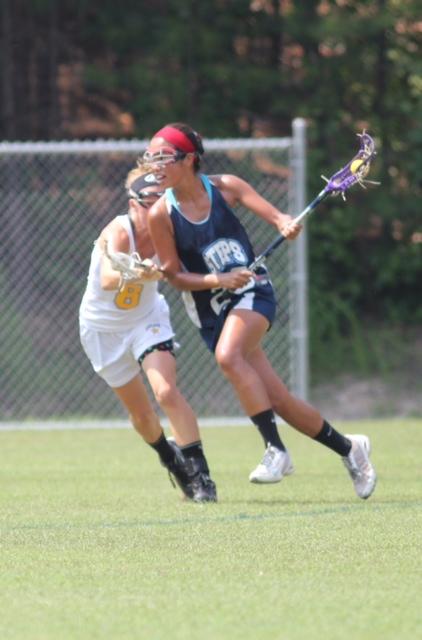 Breaking against a defender, much like this, had led to Beilman’s unfortunate injury.

As her junior year came to an end and her final year of high school was not so far away, Beilman had a lot to look forward to. She was set with her college decision, and ready to have a great senior year. She was even playing her final season of club lacrosse with Steps that summer.

Beilman knew that the last game of the season would be emotional, as it would be the first of many goodbyes she would have to go through in the coming year. It would mark the beginning of a year of changes.

But she did not know just how much her life would change after that game.

It was July 28th, and Beilman was in Virginia for the final game. Time was running out in the last quarter. She was so close to the end; so little time left.

And then it all happened so quickly.

Beilman was faking out a defender. As she turned back to go the other way, her right leg became stuck in the turf. It twisted, and she fell on it. She knew as soon as it happened that something was wrong.

She didn’t cry. She just sat there on the ground, thinking, this can’t possibly be happening again. She had much more going for her now – so much more to lose.

Although Beilman was convinced that the problem was with her ACL, the trainer at the game tested her and insisted that it was her hamstring. She could still walk, and it didn’t seem as badly injured as when she tore the ACL in her left knee. This, along with the fact that everyone was telling her not to worry, made Beilman believe that it was not as bad as she originally thought. She thought she would be fine.

But still, when she returned to New Jersey she went to get checked out. Beilman thought she had been through the worst when she tore her left ACL in eighth grade, and that she could handle whatever news she received. But when the doctor informed her that she had torn the ACL in her right knee, everything changed.

Questions sprang forward like attackers sprinting towards the net.

Would she still be on the team? Would they take away her scholarship? What would she do if the worst happened?

Beilman’s thoughts raced through her head nonstop. Her parents tried to comfort her and told her not to worry about what might happen, but rather to focus on getting better.

She couldn’t help it.

She had always heard stories of players who had committed to play a sport in college and were cut from the team when they got injured. She so wanted to be a Drexel Dragon and could not bear the thought of not being able to be a part of the team.

She had another surgery, this time on her right ACL. Two life-changing surgeries in four years is more than some people have to endure in a lifetime.

Only Alex Beilman had just turned 18.