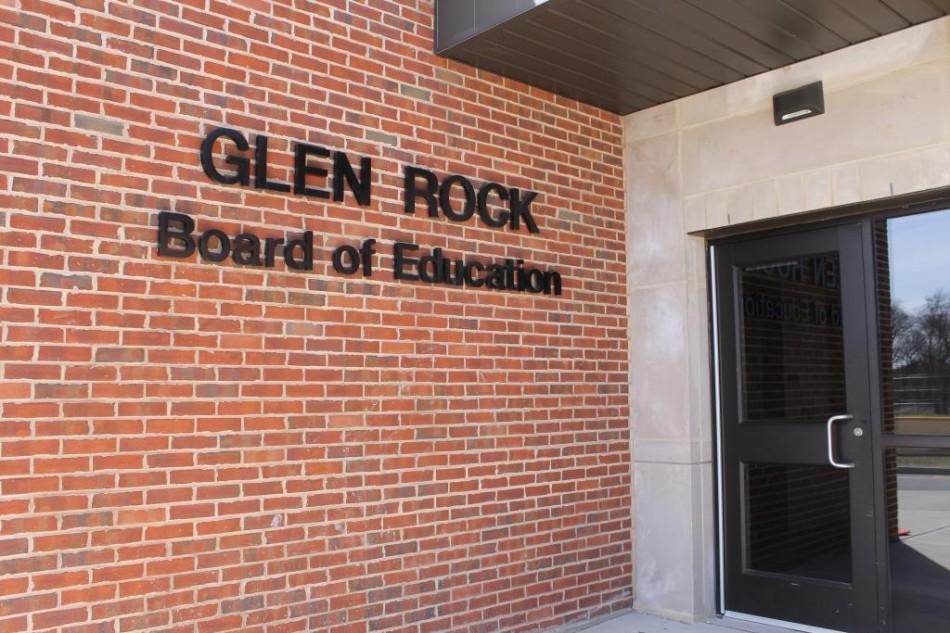 Glen Rock Board of Education Offices are attached to the high school building, a little known facet to students.

GLEN ROCK, N.J. – Frank Manziano, high school business teacher, stood with his back to his waiting class, his antiquated laptop refusing to perform the simple task of loading a two-minute video. For over five minutes – one ninth of a class period – students sat silently, unable to learn, as a blank screen was projected overhead.

The laptop used by Manziano is outdated, a reality that Tim Mountain (’15) says is “completely inexcusable.”

“It really hinders the learning experience when you’re sitting in class for 15 minutes waiting for a laptop to turn on, and you can’t get anything done until 15 minutes into the period,” he said.

Mountain tells The Glen Echo the story of his history teacher, who was fed up with the technology in the school. He purchased an iPad (with his own money) in order to have equipment with which to teach his class.

In such a wealthy school district, what’s the reason for this?

The Glen Rock School District currently spends approximately $50 million every year (give or take $2 million) and takes in exactly the same amount, meaning that it has a balanced budget, an accomplishment that the United States Congress has not achieved in over 15 years. The largest four appropriations in this $50 million include:

The data above accounts for about $25.3 million and 50% of the district’s budget.

Some students question the allocation of funds by the school district, however.

“A lot of people think that [schools] exist to fund sports for their students… I think they exist to promote knowledge, education and learning in their students. [They should] spend their money and the majority of their budget on new technologies, which are able to improve and make more efficient the process of learning,” Tim Mountain said.

Those who might be inclined to agree with Tim would likely believe that the school should first improve educational programs, and then worry about sports after that.

Tim said that the school should improve “computers and calculators” so that they were not outdated.

“Anything more than five years old is probably outdated,” Tim said. “I know from my English class that the projector in my English classroom was not working for a few days and it really hindered our ability to learn.”

“I’d say that a lot of the computers in the media center are not up to date, and you would think that the media center would be the technological hub of the school, but that doesn’t seem to be true,” Mountain said. “A lot of keyboards and mouses don’t work properly; that’s something that need to be invested in.”

Mountain believes that a media center should be full of state-of-the-art computers, functioning perfectly, and maintained by the school district.

“I think the most important piece of technology that we use at GRHS would probably be our laptop and desktop computers,” he said. “There is just so much you could do with a computer, which includes all the subsidiary programs that you can run that help enrich the learning process.”

Richard Gueren, also a junior, said that the computers were “old,” adding that “some of them don’t work properly, and there are not enough for all the students.”

For many students, though, the numbers just don’t add up.  Glen Rock is considered a J-district in New Jersey’s “District Factor Groupings,” the highest possible designation for a school’s socioeconomic status.

“I think one of the benefits that should come with being [a student] in such a wealthy school like Glen Rock High School is that you have access to state of the art technologies,” said Mountain.

To put this into perspective, the child study team currently receives $1,144,936, and the guidance department gets over $1,000,000. It seems rather surprising that a department such as the child study team, which serves only a small portion of the student body, receives more funding than the media center, which is used by the entire school.

I don’t really see our school security being compromised at any time in the near future.”

Another provision in the school districts’ proposed Capital Projects budget is a High School/ Middle School Interior/Exterior Security Camera Project Upgrade. This would create a sort of “trap” in the vestibule of the school, one in which cameras could see those trapped between the locked interior and exterior door before provided entry into the building.

Such upgrades follow in the wake of such tragedies as the New Town, Sandy Hook Elementary School shooting.

Nevertheless, some students in Glen Rock have expressed that they’d prefer to see the funds allocated toward improved technology rather than security.

“I don’t really see our school security being compromised at any time in the near future,” Mountain said.

Brendan Geen echoed this sentiment, saying that he “[feels] very safe in this school.” Richard Gueren also thought that improving technology would be a better place to invest money.

Students expressed the belief that a police officer could respond to an issue at an incredibly rapid pace, particularly given the small size of the town.

Recently, Glen Rock has spent money on new sports fields and tennis courts. This is not necessarily a bad thing. Today, though, there are more than a few students who maintain that the education of students and the facilitation of said education should now become the priority of the school district.

The School District procures $50 million in funds required to maintain technology, build sporting equipment, pay teachers, and perform the various tasks that school districts do through the following means:

B] Federal grants and programs

The State of New Jersey currently provides the Glen Rock School District with an approximate total of $1.2 million in revenue. $976,359 of this funding is spent on Special Education classes; $23,922 goes to transportation; $189,960 is labeled Extraordinary Aid; and $34,708 goes toward bolstering the security in the school. The school district has also used $3,101 in ‘Other State Aid.’

Title II is a federal grant targeted at improving the standard of education in all US schools. It gives money to schools with “highly qualified teachers.” President Johnson first introduced this legislation in the 60s, but President Bush, as part of No Child Left Behind, renewed it in 2001.

The Title III program was also introduced by Johnson in the 60s and was also renewed by Bush as part of No Child Left Behind in 2001. This program was created to fund English as a Second Language or ESL classes, which teach non-native children English.

Nevertheless, the school district receives the vast majority of its revenue from taxation rather than from any other source.

The district has been receiving approximately $40,033,500 each year, and expects to continue to receive this much. This local tax revenue accounts for approximately 80% of overall district funds.

The district receives a small amount of money from interest paid on holdings, such as that earned by the Current Expenses Emergency Reserve, interest earned on the Capital Reserve Funds, and from what they call “miscellaneous revenues.”