The story of Mack “Playoff” Alvino 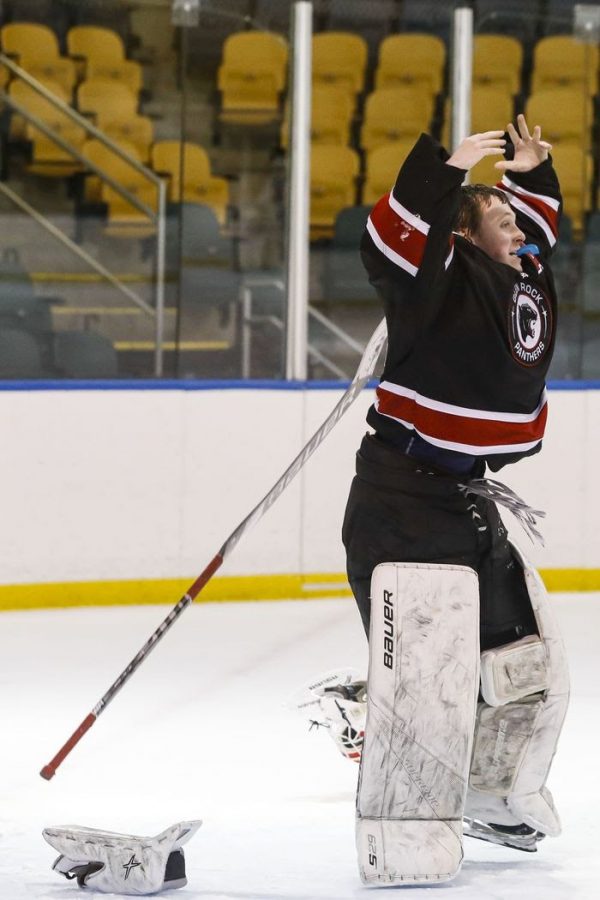 Alvino throws up his equipment in excitement moments after Glen Rock defeated Livingston 4-0 in the McInnis Cup.

“The horn sounds and the Glen Rock panthers are your 2021 McInnis Cup Champions!” the announcer called out as the clock hit zero. Panthers goalie, Mack Alvino, recorded a shutout in the final game and posted just three goals against in the Panthers three playoff games. This led to an ensemble of awards coming his way, including 1st team all county, 1st team all conference, 1st team all north Jersey, and many more.

How did he get here? Alvino took over as the starting goalie halfway through his sophomore season and didn’t look back. He has started in net for every panthers game since he was promoted.

After two tough endings to his sophomore and junior season campaign, Alvino went into his senior year with a new mentality. This was his last opportunity to wear the rock sweater. Just when things were looking good for the Glen Rock, Alvino tested positive for Covid-19. This was heartbreaking for the entire team, but no one more than Alvino. He felt like he let the team down and put the season in danger. In his two weeks at home, Alvino became sick and tired of watching rival teams playing. He wanted his chance to win the league.

The regular season was cut short for the panthers as a player on West Essex, a team the panthers played against, tested positive for COVID-19. Glen Rock finished 4-2-1 and only played a total of seven games. The quarantine period would be 14 days and unfortunately the first round of playoffs needed to be played one day before the quarantine ended. This led to coach Portas telling the players that the season was over. Heartbreaking news for the entire team. But after great effort from the parents and coaching staff, the panthers were able to push back playoffs an extra day so they can have one more chance for the McInnis cup.

Alvino said, “ It takes a lot of heart to be able to take in being told we were done for the season and then suddenly being revived. I think a lot of other teams would’ve struggled coming back after not practicing or anything for 2 weeks, and we literally didn’t have any prep time, we got our morning skate 8 hours before the Summit game then that was it.”.

For the Alvino family, this win was more than just hockey. Mack said, “I’ve grown up taking a lot of pride being a third generation in Glen Rock. My Dad and Aunts and uncles all had success on the field here and I think being an Alvino just added to the desire and really pushed me to work harder than ever last summer”.

Since taking home the McInnis Cup, Alvino took some time to travel to Florida with his family. He told the team, “I’m going to Disney World” just as any other champion would say.