Fall athlete of the year 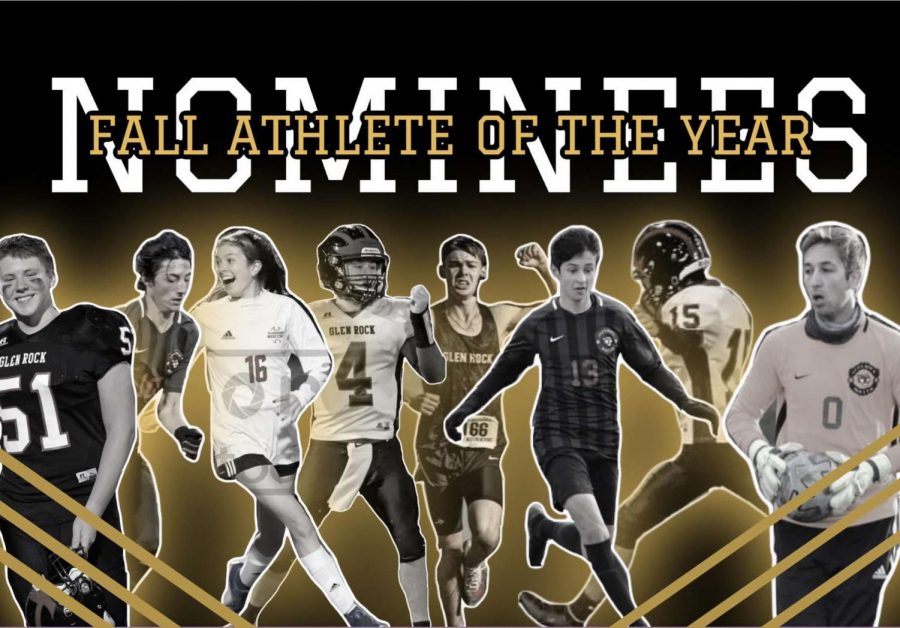 This year, The Glen Echo will award an ‘Athlete of the Year’ for the Fall, Winter, and Spring varsity seasons. The sports beat writers at the Glen Echo did our research and compiled a list of 10 student athletes that were most valuable to their teams this fall, with all 5 fall teams being represented.

Under this paragraph there will be a link to vote. Vote for the athlete you thought to be most deserving for athlete of the year. The leader in votes at 1pm EST on Friday, Dec. 4. will be crowned The Glen Echo Fall Athlete of the Year and will be interviewed by the Glen Echo for a subsequent feature article.

Click this link to vote: Fall athlete of the year

The Glen Echo Fall Athlete of the Year Nominees:

Aidan Carroll very well could have had the best individual cross country season Glen Rock boys have had in the past decade. Despite the shortened season Carroll picked up many signature finishes including a third place finish at the North Jersey Finale with a time of 16:44, making him the third fastest boy in Bergen and Passaic county. Along with this he won the North 1, Group 2 sectional championship, where he also broke the school record with a time of 16:38 at Garret Mountain. Carroll has cemented himself as one of the best distance runners in the county, and possibly even the state.

Ty Scherer led both the offense and defense for varsity football this year. Scherer completed 47.5% of his pass attempts gaining 807 yards via the air and reaching the end zone 10 times. He proved equally potent rushing the ball for the Panthers, as on 86 carries Scherer amassed 560 yards and 13 scores. On the other side of the ball Scherer started at safety intercepting Hawthorne twice in one game while quarterbacking the defense. The case for Scherer as Fall Athlete of the year is an easy one to make.

Ryan Burstiner is an equally important and criminally underappreciated member of the 2020 squad. Linemen never manage to attract the favor of fans the way Quarterbacks do, but they remain crucial to the team’s success. Burstiner played practically every snap this year, blocking for Scherer on offense and pursuing the opposing QB on defense. ‘Burst’ as he is known, also hauled in 1 catch (the only of his career) and scampered 11 yards before diving for the game winning Touchdown at Garfield. He finished the season on defense with 2 sacks, 26 tackles, and 1 interception.

Nico Hernandez-Torre became a fan favorite in his only year on the football team. He completed a perfect season in dramatic fashion nailing his 31st consecutive PAT to send our Senior class off into the sunset with an Overtime triumph over Rutherford. Although Hernandez- Torre didn’t attempt any field goals this year, Glen Rock faithful are sure he would’ve hit those as well.

Dylan Vila stood tall in net for the panthers this year, allowing only 11 goals in 15 games which included 8 shutouts (6 in his first 7 games). Vila was probably the runaway candidate for this award through the first half of the season, his play barely ever wavered though. He stopped 88.2% of the shots he faced and was as consistent as they come between the pipes this fall.

Owen Neubart, dubbed ‘Aquaman’ by nj.com, has a spectacular season this year, netting a team leading 12 goals and adding 4 helpers to his contribution. Despite being the youngest nominee on this list, Owen was as big a piece for this year’s team as anyone else. He is a reason for Glen Rock fans to feel optimistic about the future.

Aly Novick was the steadfast team leader for the girls team that went all the way to the state sectional final despite ending only a game over .500. Novick scored 5 goals along with 5 assists and was the outspoken face of the team. She will be a dearly missed force next year.

Eisenberg has been a staple for the Girls Tennis team since her freshman year, and she had yet another stellar year this season. She led Glen Rock to the sectional championship game. She ended the year 7-2, and achieved first team all league for singles.

Jason Kapiloff may have trailed behind Owen Neubart in the team lead for goals (scoring 9 himself), but there’s no stat for clutchness. If there were, Kapiloff would surely be topping the ranks. His Overtime winning goal in states at Lyndhurst was only the pinnacle of a great season and fantastic career for Kapiloff.

Jillian Luftman was an often overlooked asset that was instrumental to the success of the girls soccer team this year. Her consistent play on defense alongside Rylie Duncan, Julia Corry, and Maeve Williams was fantastic at thwarting the offense of the opponents. Unlike her fellow defenders, Luftman had a knack for getting involved on the other end, scoring a goal and putting up as many assists as her other 3 defenders combined (2). She will be a captain and returning starter for next year’s team that will rely heavily on her good play.