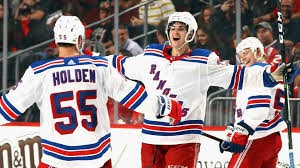 Brandon Crawley celebrates his first goal with the Rangers at the Prudential Center on Sept. 23, 2017.

Glen Rock native Brandon Crawley has agreed to a contract extension with the New York Rangers.

The GRMS alumni has never played a game in the regular season for the Rangers, but he has previously played for two of the Rangers’ affiliate teams, the Hartford Wolfpack (AHL) and Maine Mariners (ECHL), and made appearances in preseason games for the club in 2017.

Crawley, 23, grew up in Glen Rock and attended Bergen Catholic High School. He was picked by the Rangers in the fourth round (123rd overall) of the 2017 NHL Entry Draft. Being drafted at all in the NHL Draft is very prestigious. The NHL Draft consists of 7 rounds, which is very short compared to the other professional sports drafts.

Coming out of high school, Crawley elected to play in the Ontario Hockey League (OHL) making him NCAA ineligible. In the OHL he won the Mastercard memorial cup with the esteemed London Knights. Notable teammates of his include Toronto Maple Leafs Mitch Marner and Montreal Canadiens Victor Mete.

The details of the contract are unknown, but it does ensure that Crawley will return to the club for the 2020-2021 season. It is assumed that Crawley has been re-signed to a two-way deal, meaning he will likely remain in Hartford and potentially earn a call up to the New York Rangers. A two-way deal allows Crawley to move up and down between the minor league club and professional club. He will make somewhere in the range of $700,000 per year over this RFA (Restricted Free Agent) contract.