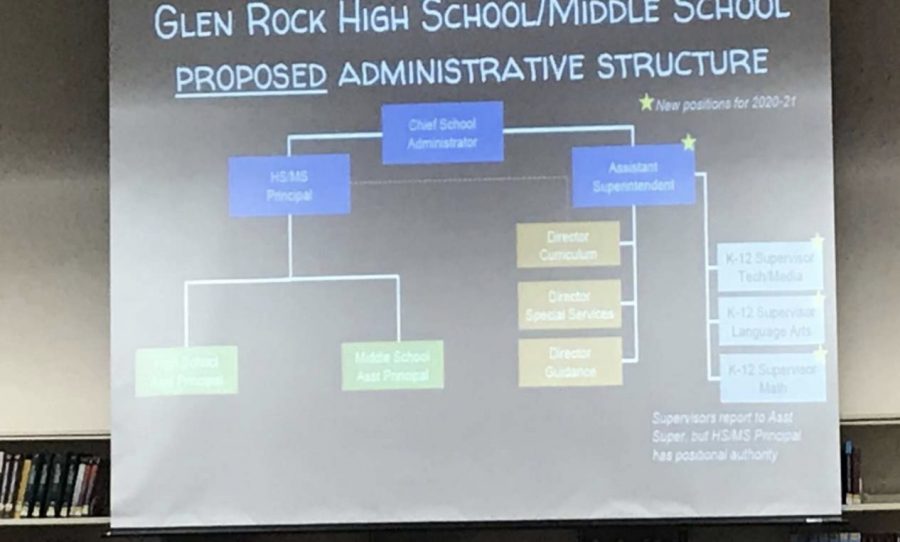 Superintendent Dr. Brett Charleston and the Board of Education propose a major restructuring of the district administration. The proposal includes a single principal for the middle and high schools, an assistant superintendent, and three K-12 supervisors.

by Andrew Kastelman and Rob Zamparelli

Glen Rock School District Superintendent Dr. Brett Charleston and the Board of Education proposed a major restructuring of the district administration last night, which would unify the middle and high schools under a single principal and introduce three K-12 district supervisors.

Both schools currently have their own principals, but they will be leaving at the end of the school year for separate reasons. High school Principal John Arlotta is planning to retire, and middle school Principal Dr. Jennifer Wirt tendered her resignation last night.

The proposed supervisors, Superintendent Charleston explained, would report directly to the newly instated Assistant Superintendent—a position that will begin this summer. The newly created position has already had over 40 applicants.

According to the presentation, supervisors will be hired as content-area experts who will teach model classes for new and “struggling” faculty, co-teach, support staff members, and provide professional development. The district plans to retain its Director of Curriculum position under the proposal.

The Board also expressed plans to hire additional K-12 supervisors in Social Studies and Science in the next few years according to Dr. Charleston.

If approved, the proposed restructure would take effect on July 1, 2020. The Board plans to vote on the proposal during its next meeting on Tuesday, Feb. 25 at 8 p.m.