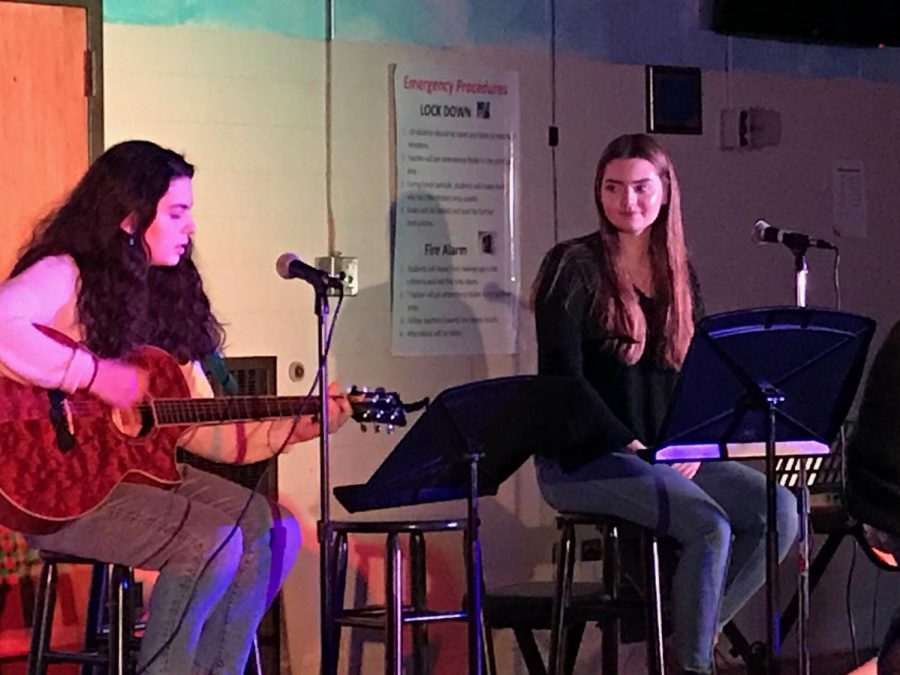 Caroline Torpey and Sofia Nolfo perform together for the fourth year in a row, singing “Mercy.” The duo has been friends since elementary school, and has shared their love of music together over the last decade.

The Möbius Art and Literary Magazine hosted its forty-seventh annual Coffeehouse on Dec 5. Students from all grades performed original songs, original poetry, and covers of songs.

The event was completely student run. The staff of the Möbius magazine set up the cafeteria for the evening, and the editors in chief, Abby Stern and Abby Kirsch, emceed the event.

The advisor of the magazine, Patricia Mahoney, has been in charge of Möbius since 1993.  The English Department always helps out with Coffeehouse, but because Mahoney is the club advisor, she dedicates the most time into making the night possible.

The origins of Coffeehouse stem from former student, Bronwyn Purcell. She’d seen a Coffeehouse event in Ridgewood, and asked Mahoney if Möbius could do something like this in Glen Rock.

The first Coffeehouse was a success, so the staff of the magazine decided to host a second one that same year. Ever since then the event has taken place twice a year, once in December and once in April.  The 2019-2020 school year is the 24th year of Coffeehouse, and Mahoney hopes to see this tradition continue for many more to come.

“What I love about Coffeehouse is that students of all ages feel comfortable enough or brave enough to get up in front of their peers…and play their music or read their creative writing,” Mahoney said.

She views Coffeehouse as an excellent forum for students to express themselves in a warm and welcoming environment.

At the end of every Coffeehouse, Mahoney says both the performers and audience seem to be “glowing” because “…they’ve expressed themselves, they’ve been appreciated, and they feel like they’ve been a part of something important and something bigger than themselves.”

Coffeehouse is close to the hearts of many students, as it provides them a way to express themselves, and encourages them to channel their most innermost creativity.  One such student is senior, Caroline Torpey, who has performed at Coffeehouse every year since her freshman year.

For Torpey, Coffeehouse is a safe space where she feels welcome. There, she has performed with her friend and fellow senior, Sofia Nolfo, for four consecutive years.

Now that she is a senior, she knows their time performing together is coming to an end, but she is thankful for Coffeehouse. Through the yearly event, she has been given a place to do what she loves with the people she loves.

“I really appreciate all of the work the English teachers did, as well as Möbius members, to make this possible,” Torpey said.

While Torpey’s time with Coffeehouse is coming to an end, another student’s time is just beginning. Freshman, Sofia Fusco, performed at her first Coffeehouse last Thursday, and had a wonderful time at the event.

“Everybody was really good, and it was a very chill kind of night,” Fusco said. She enjoyed the event because of its relaxed and cozy atmosphere, which was different than any other venue in which she had performed.

Mahoney knows the uniqueness of the Coffeehouse environment and sees how the audience feels like a family.  Everyone is able to appreciate what the performers have to offer.

Many of Mahoney’s former students have reached out to her, saying how much Coffeehouse meant to them. They are thankful to have been apart of the “formative experience.”

Mahoney says that kids have told her that Coffeehouse was a place for them to express themselves and feel accepted, appreciated, and loved for what they have to offer.

“It takes a lot of courage to get up and sing or play an instrument or read a poem…the kids who have participated have something powerful to say, and this gives them a forum,” Mahoney said.