The Glen Echo travels to Rutgers for student press conference 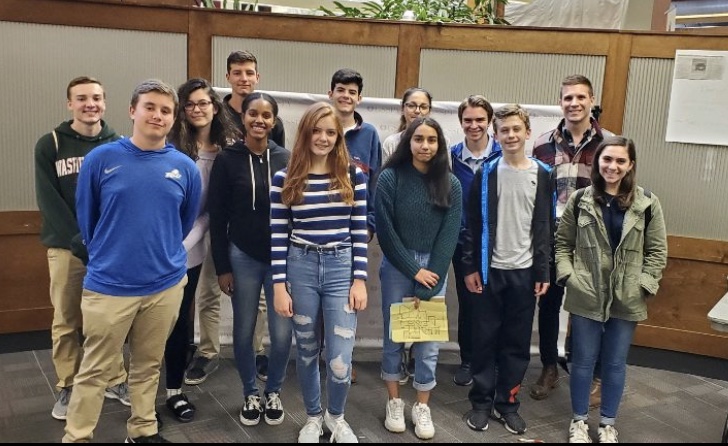 The Editor-In-Chief of The Glen Echo, Isis Kirkland, took home first place in The Record’s Write-Off Contest, a competition in which one student per school from across the state wrote on-site for the prize. Kirkland joins The Glen Echo’s two first place winners and one second place winner in this contest over the past five years.

Glen Rock placed third out of all online school newspapers in New Jersey for Online Overall Excellence and Online Distinguished Journalism. The Smoke Signal from Pascack Valley won first place in both categories

The keynote speaker was president of the Columbia Scholastic Press Association Advisers’ Association Mike Simons, who advocated for the New Jersey New Voices Legislation, which supports student journalists’ rights to freedom of speech.

Jason Toncic, The Glen Echo adviser and journalism teacher at Glen Rock High School, emphasized how special Simons’ seminar was, “The keynote really stuck out to me this year” Toncic said. “If (New Jersey New Voices Legislation) does get passed, then students are going to be able to write about the things that matter and not have to feel like a public relations outfit, and more like a real newspaper.”

After the awards ceremony, students attended panels by experienced journalists and educators to on many different spectrums of reporting, design, and writing. Specific topics that were talked about at the conferences included editing, social media, and in-depth writing.

The speakers included many well-respected journalists traveled to Rutgers to pass their knowledge down to young writers.

Stefon Bondy, New York Knicks beat writer for the Daily News, also made his way down to Rutgers to give advice and shared stories with student journalists, all before the Knicks squared off against the Chicago Bulls later that night.

Attendees could also take part in Student Roundtables, during which students could talk to writers from other high schools and learn about how to make each other better.

Toncic weighed in on the importance of the conference.

“One of the most important things that I learned was about collaboration across newsrooms,” Toncic said. “I went to a speaker from a Montclair State who works on collaborative journalism. He spoke about how different newsrooms can work together to enhance their coverage.”