Bring It On: The World of Competitive Cheer 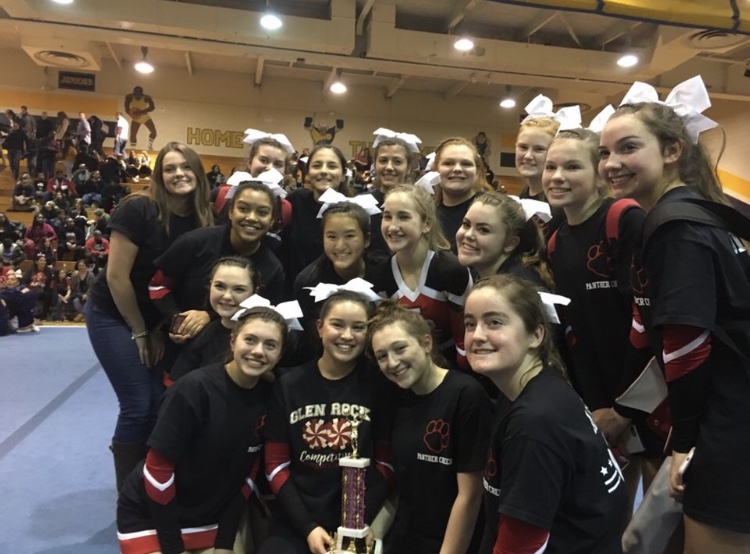 Training for competitions like these take the team hours and hours of practice.

Catfights, callouts, and cutthroat competition; thought that was all cheer is about? Think again.

Competitive cheer, different from sports cheer, consists of squads of different towns travelling to competitions to show off their skills and try and take home a trophy. Movies like Bring It On have depicted competitive cheer as dramatic, high intensity and almost ruthless sport. But is that really all competitive cheer is chalked up to be?

“I have always thought that cheer was a really fun sport,” junior and competitive cheerleader Jenny DeStefano said. “But I think it’s definitely boosted by the fact that I’m doing it alongside my best friends.”

However, the high intensity and stunting of competition cheer marks the largest difference between football/basketball cheer and competitive cheer.

DeStefano said “Competition overall is a much bigger commitment than basketball cheer is just because of how frequently we practice and the level of stunting is more intense with competition.”

DeStefano has been cheering varsity since her freshman year. Last year was her first year competing, before the team was split up between competition and football/basketball cheer.

“I was still getting acquainted with everything which could be stressful, but this year I’m really excited to compete with our new routine,” she said.

The team practices every day after school, and they compete every weekend, which takes up the whole day. Not only that, the team has to practice their physically demanding and potentially dangerous stunting routines.

“You get bruised up and knocked around, because we’re performing difficult stunts with just a mat separating you from the floor, DeStefano said.

The stunting does have safety protocols; an ice pack and a med-kit is always on hand in case of injury, in addition to the fact that hair must be up, jewelry is prohibited, and you cannot wear baggy clothes. Also, the team cannot stunt unless the coach is present.

Although, injuries are such a common occurrence that an alternate line-up is always set up for competitions in case a regular teammate is injured.

Natalie Brangaccio, junior and competitive cheerleader, said, “The hardest part is definitely stunting, and people don’t always realize how hard it is to lift people.”

Not only is cheering physically demanding, but emotionally as well.

“Trying over and over again to hit stunts is definitely emotionally demanding as well as physically demanding because you get so motivated to make it work, and when it doesn’t it can be really frustrating,” Brangaccio said.

“Especially being on a team, cheer has taken over a large part of my personal life, so of course in that respect, it is emotionally tolling,” she said.

Brangaccio also believes competition cheer is much more stressful than football or basketball cheer, because you are competing and performing to win.

“Going out to perform knowing that if you mess up it will affect the entire team makes it a bit more stressful,” she said.

Although, both have a coping tool that can help them get through the trials and tribulations of cheering competitively: friendship.

“Even though cheer as a whole has a bad rep because people think that all the girls are mean and constantly fight, people don’t realize how close we all really are,” DeStefano said. “It’s so much fun to do this with my friends, and I’m truly thankful that we all are able to get along.”

Brangaccio also attributes a part of her success to her friends. She said, “We all become basically one big friend group, and it’s nice to be part of such a welcoming and supportive team.” She also believes that the feeling of satisfaction when you get to show off something you have been working very hard on is rewarding.

Overall, DeStefano believes that even though competitive cheer is challenging and difficult, her friends are her rock.

“You’re doing it all with people that you love so it makes it worth it.”