Is eating meat right or wrong?

Why eating meat is unethical 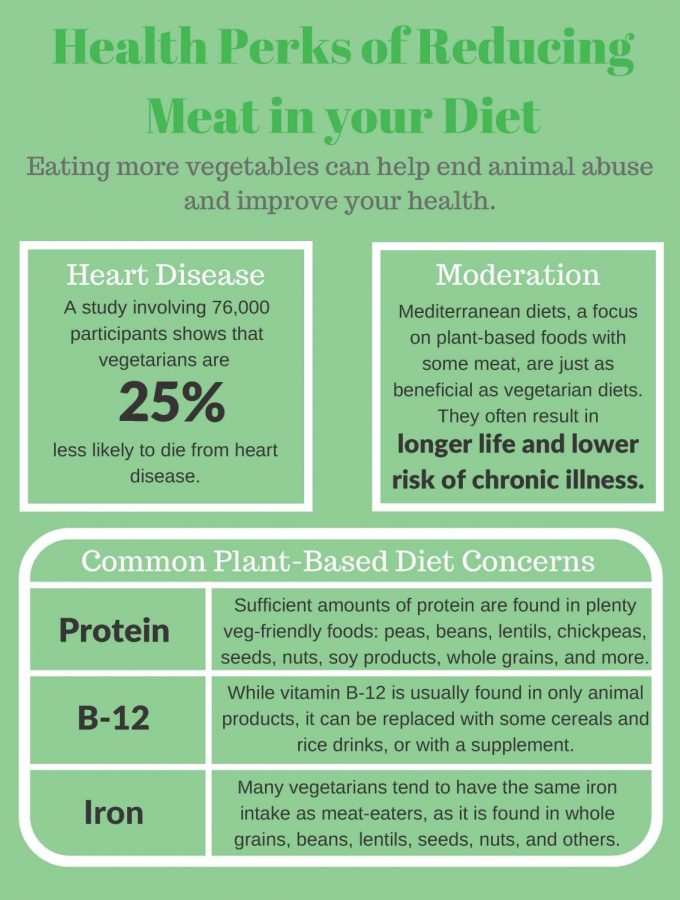 Too many animals raised for slaughter are forced into terrible conditions so severe that many are unable to even turn around. Some pigs that are kept in gestation crates are confined to the point where they accidentally kill their own children because they can not shift their weight. This abuse is the real price paid for an abundance of cheap grocery store meat.

Cruel conditions like these are too common for animals slaughtered in factory farms. 99% of animals raised for slaughter are kept on factory farms, many of which have these conditions. According to the USDA, the average price retail price of meat is relatively low, with most not above ten dollars. The these prices are made possible through inhumane practices consumers of meat are indirectly supporting.

The importance of the lives of animals is often seen as a lesser issue. While people purchasing meat from a factory farm do not personally kill the animal, they are still contributing to its death. Think about it, if consumers of meat were forced to kill their own meals, would they?

This mistreatment of animals often seen as a problem that is not very important, as it is rarely associated with human health. However, animal mistreatment is also harmful to humans because of the extensive antibiotic misuse in many U.S. factory farms. In an effort to control disease, many factory farms give antibiotics to their animals, leading to superbugs that are resistant to many traditional treatments. The strengthened viruses and other issues on factory farms can not be dismissed as a problem for only animals.

The harsh conditions many animals are forced upon can not be ignored despite the meat industry’s extensive efforts to cover it up. In order to do this the meat industry often turns to the law, which often favors the factory farmers over the lives of animals. In response to photos that went viral of an abusive factory farm, Idaho’s state legislature jumped to save the factory farm. Ag-gag laws were put into effect in Idaho, making it illegal to take photos of abuse occurring on factory farms. Other states followed suit as this law became more common. The meat industry will stop at nothing to ensure that the details of their exploitation of animals is secret.

Many laws similar to the ag-gag law are also being passed in different states. The Right to Farm law exists in many states, limiting local regulation on factory farms. While disguised as a simple protection of farmers’ rights, this law actually can help keep abuse on factory farms private. It seems at every turn the meat industry has found a way to obscure their abuse.

As a vegetarian, I have encountered many misconceptions about those who believe eating meat is unethical. An opinion I often come across is that vegetarians and vegans are trying to control everyone with their restrictive and unhealthy diet for the lives of a few animals. This statement could not be more incorrect in my opinion and in the opinion of other vegetarians and vegans I know.

The opposition to vegetarianism and veganism often argue that it is unrealistic to completely eliminate meat in a society so dependent on it. A more realistic goal would be to reduce the demand for meat, which would be beneficial for abused animals. Without the large demand of meat products, the justification for these cruel practices would be weakened and help put an end to the abuse of animals raised for slaughter.

Vegetarians and vegans are not trying to ruin everyone’s fun by taking away everyone’s food. The reality is that any small changes made in daily life can be helpful in trying to end abuse. Something as simple as limiting meat to a few dinners a week can help the meat industry feel the effects. As long as consumers continue to purchase meat produced by abusive companies, factory farmers will continue to exploit animals for their own profit.

Throughout my experience as a vegetarian, I have encountered many strong reactions to my dietary choices. I find that some feel they are personally under attack as I talk about my beliefs. This is actually helpful for the meat industry because it helps meat eaters dismiss the idea of reducing meat in their diet, leading to the sale of more meat. It is important that meat eaters and vegetarians do not alienate each other, but rather alienate the factory farms for their abuse.

Why it is unfair to say that eating meat is unethical 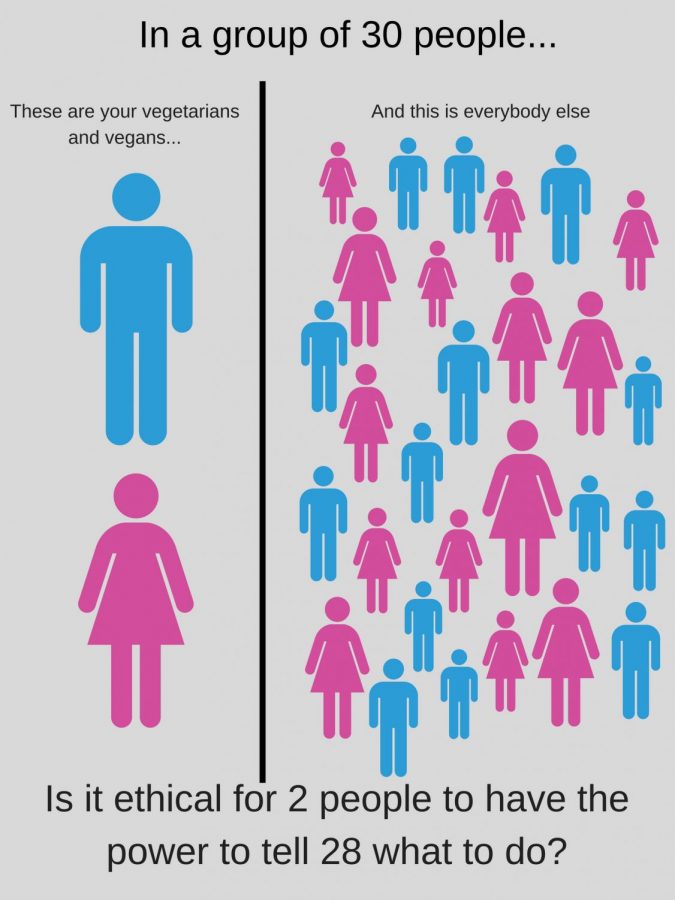 Since the dawn of time, animals have eaten other animals.  The hawk eats the snake which eats the mouse. Meat sustains animals, and humans, as animals, eat meat to sustain them.  The food chain is a natural part of life, so to claim that eating meat is unethical is unnatural.

The only reason a person can become a vegetarian and claim that eating meat is unethical is because we live in a day and age where food can be processed to imitate the properties of meat.  One hundred years ago, if a person did not eat meat, they most likely would not survive. Eating meat was and for some is still a way of survival.

If everyone in the world stopped eating meat, all of the people that work in the meat industry would lose their jobs.  Is it ethical to cause worldwide poverty and rural upheaval? There is only one answer to that question. Much of Earth’s land is proven to be able to sustain only livestock agriculture instead of raising crops.  We would be losing a business and its revenue and have no industry to replace it with. There is no alternative solution. We would be backing people into a corner of poverty and giving them no way out.

Vegetarianism, on the other hand, is a choice, and people have the right to choose whether they dine on a hamburger or not.  If I eat meat it will not affect the fact that someone else may not, however if someone else forces me to comply with their views then I am losing my right to choose.  To me, that is as unethical as it gets. As a matter of fact, only 3.2% of the U.S. population is vegetarian and only 0.5% are vegan. That leaves the other 96.3% of us pretty forgiving when others eat meat.

In the meat producing industry, there are undeniable reports of unethical treatment of animals.  This inhumanity should not be tolerated by the carnivores of the world, and the solution to this problem is not to cut out meat altogether.  When the branch of a tree is dying, do you cut down the whole tree or do you simply amputate the branch before the disease spreads? Cutting down the tree may solve the problem in a convoluted way, but one diseased area should not result in the demise of an entire system.

If you feel that animals are being treated unfairly, and you want to change this, there is so much that you can do.  Advocate for your beliefs, right letters to congress asking for legislation, go to rallies, educate others on the inhumanity of the industry.  The meat industry does not need to be killed, it needs to be saved.

Though the negative outcomes of eliminating meat are prevalent, I must admit there are benefits of vegetarianism, for the body, for the environment, and for the economy.  However, to deny the world these benefits by choosing to eat meat is not unethical. It is merely a reason for us as humans to come up with alternative solutions to these issues.  Eating meat is unavoidable for the entire human population. There is no situation where the governments of the world could collectively force the human population to stop eating meat, so it is not fair to suggest that those who do eat meat are denying the rest of the population the aforementioned environmental and economic benefits.  Banning the consumption of meat is not the solution to these problems.

For the American carnivores, we live in a society where majority rules, and the majority has established that they are more than ok with eating meat.  I respect vegetarians a lot for doing what they feel is right for them. But what is right for you is most often not what is right for others. It is unethical for a small group of people to force the larger population to comply with their minority opinion.

The non-vegetarian population is the majority, and we have decided that eating meat is ethical.  As a proud omnivore, I believe that my right to eat meat is undeniable. Eating meat is a natural part of animal existence, and even though humans have evolved enough to create substitutes and survive without consuming meat, this doesn’t mean that we can’t or we shouldn’t.  Meat is a natural part of life, and ethically, to have a nice steak is just keeping the food chain in motion.