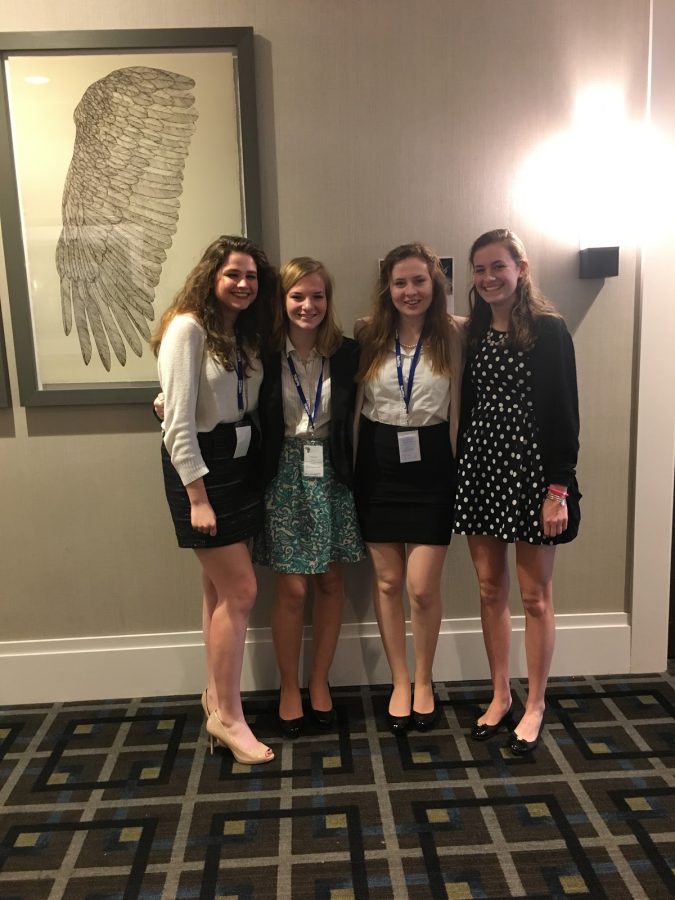 Seniors Lindsay Vachon, Nina Dunn, Erin Dunn, and Emily Schaefer pose for a picture after a committee session at their last Model UN Conference in High School. “I’ve been in this club since freshman year, I joined for fun, but I’m sad it’s my last trip with Model UN,” Schaefer said.

“We won the best prize of all,” said Emily Schaefer, senior delegate of the Model United Nations, “the satisfaction of a job well done.”

The Model United Nations participated in an annual conference in Philadelphia on March 2 through March 5. Students of all grades are members of the Model UN, and the club is advised by history teacher Katherine Bennin.

The Model UN Conference between high school and college students from different schools across the country. The students discuss and argue issues that the United Nations faces. These issues can consist of historic issues, certain elections, modern day issues, or mock trials of international leaders. Prior to the conference, students are assigned a country and topic to research and prepare a paper to present to the committee based on their country’s stance on an issue.

Erin Dunn (‘17), represented the country of Italy for this conference and her committee specialized in the commission on the status of women.

“My role is to talk about and represent Italy and what they want for the status of women on maternal health and empowerment through education,” Dunn said.

In preparation for the conference, Dunn had to prepare two position papers to present to an unmoderated caucus and a moderated caucus. While preparing arguments for the committees, it is important for students to focus on the stance of their assigned country, and not to include their personal opinion in their papers.

“It’s your country, it’s not your personal opinion,” Dunn said.

Dunn has been a member of the Model UN since her freshman year, and this conference in Philadelphia is her fourth trip with the Model UN.

“I like how every year something different, you can learn a lot and meet a lot of different people, and talk to different countries with different ideas,” Dunn said.

As a senior on the Model UN, Dunn is expected to help train the younger members of the club. The Model UN also has an executive board that helps facilitates in the training of younger delegates and helps with the training of other students.

“We have practice sessions also, how to speak, what this looks like, what do we do, what to say, and we have presentations on that so I have previous members who’ve been on the conferences and have participated partake so that they can help practice as well,” Bennin said.

There is a competition element to the Conferences as well. Students can be awarded for their position papers, speaking and delegation skills, as well as resolutions that were reached within committee sessions. Two seniors from Glen Rock were awarded this year for positions papers that they prepared prior to the conference.

Nina Dunn (‘17) is a senior in the Model UN and has been a member since her freshman year.

“I wanted to get involved because it’s a great experience to meet new people with different views and ideas and it’s a fun trip with my friends,” Dunn said.

Bennin has been the adviser for the Model UN for eight years now, and this is her third trip to this particular conference in Philadelphia. For the past three years however, the conference has been held in Boston, Mass.

“For me, it’s interesting because I get to look into and I get to see when we go to the conferences our students participating and arguing for their points,” Bennin said.