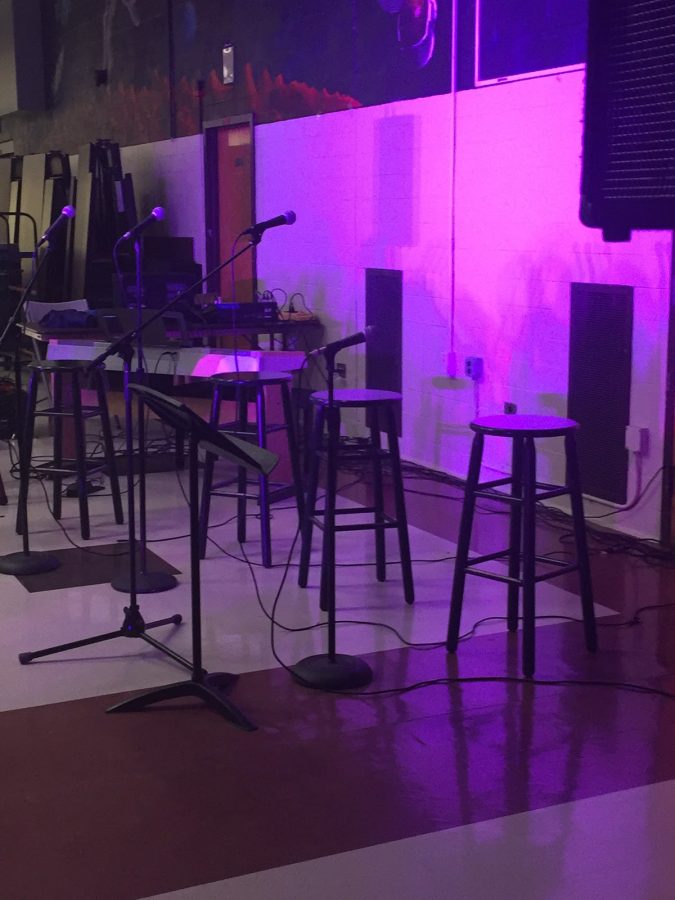 A view of the stage setup for Coffeehouse XLI

The 41st annual Coffeehouse, sponsored by Mobius, took place in the cafeteria on the Dec. 1, 2016. There were 16 student performances in total, ranging from solo musical acts to poetry.

With seniors Cami Kaselow, Matt Lacognata, and Megan Stoddard hosting the event, the cafeteria was packed from 7-9 p.m. as high school students from all grades rose to the stage to display their artistic talents and capabilities. Chairs and tables were positioned around the room for spectators to sit and enjoy the student-generated entertainment.

The turnout for Coffeehouse is often around 100 to 125 people, most of them either being parents or friends of high school students. The event takes place twice a year, once in the fall and once in the spring. Students have a chance to watch their peers, sometimes accompanied by teachers and parents, play a musical instrument, sing, and/or read original poetry in front of an positive and supportive crowd.

This event is  sponsored by the Mobius club, and the money raised from Coffeehouse is used for its art and literary magazine published at the end of the year. The magazine is a compilation of various works of written and visual art produced by students throughout the year. Everyone is encouraged to submit original pieces of art and writing to Mobius, which meets to review them regularly on Thursdays.

Coffeehouse has been a schoolwide tradition for 21 years, according to event coordinator, Ms. Patricia Mahoney. She is the leader of the Department of English as well as the adviser for Mobius. She has been the adviser for Mobius since 1992, and was originally approached with the idea for a GRHS Coffeehouse by a student. Mahoney found it a great idea and decided to try it “and see if there was interest on the part of the kids here… and the first one here to our surprise, was enormously successful.”

“It’s just usually a celebration of our community’s talents,”  Mahoney said in regards to Coffeehouse. The celebration’s initial success held up, with new students being given the chance to display often-hidden talents through Coffeehouse.

“Personally, I never perform for anyone else,” Crawford said. “So it’s just like one thing I can perform at and feel safe.”

This has been the third Coffeehouse that Crawford has attended.

For James O’Rourke (’18), the associate editor-in-chief of the Mobius staff, this is his third Coffeehouse as well. He had performed in Coffeehouse in the past, doing stand-up comedy for the event’s 40th anniversary.

“I really didn’t think there was a sort of outlet for that thing, until I found out about Mobius,” O’Rourke said.

“I think it’s probably getting to see not just my friends perform but seeing everybody perform, and everybody has their own unique style, and everybody has talent [especially with] a lot of people I don’t see performing very often,” O’Rourke said. “It’s a nice way of seeing talent that doesn’t get displayed in [other school activities].”

O’Rourke encourages everyone to come to future Coffeehouses.

“It’s a great way to support the arts in our school and if your friends are performing then it’s great to cheer them on as well.”