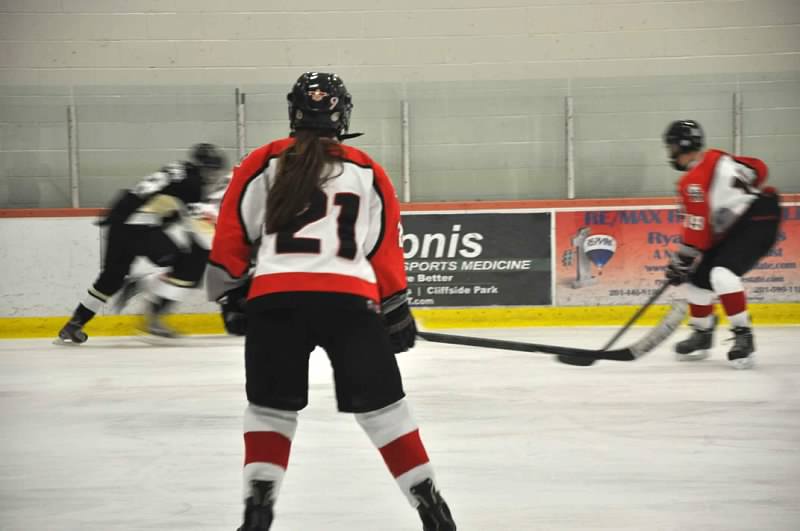 Danielle Felicioli anticipating the next play.

Although she has decided to play only on her club ice hockey team this year, Danielle Felicioli was one of the few girls on the Glen Rock High School hockey team in its history.

Felicioli has been on the ice with her three older brothers since she was little, so playing on an all boys team isn’t an upgrade compared to previous years with her brothers.

“It’s kind of awkward being the only girl,” said Felicioli. “Guys just play differently, so going from girl’s hockey to guy’s hockey is really weird sometimes.”

She tends to enjoy the sport because of its physicality and competitiveness.  “You don’t find that a lot in girl’s sports,” she said. “In girl’s hockey we pass different, hit different, and the speed of the game is different.”

Felicioli’s former head coach is Sergio Fernandez.  Fernandez first saw her playing in a summer league during the summer of her freshman year and she has improved since.

“My coach doesn’t treat me any differently, which is good because there are a lot of coaches that don’t know what to do with a girl on a guy’s hockey team, so I am lucky to have a coach that treats me equally,” said Felicioli.

She played defense for both Glen Rock and her club team, the New Jersey Rockets, a junior team.

“Her hands and skill set have improved,” Fernandez said. “She’s an excellent skater, she has a good sense of the game, and her hockey IQ is very good. Overall, she is a very good player and is very passionate about the game.”

Fernandez’s advice for Danielle is to keep working hard and to look to get better every day.

Glen Rock’s Frank Violante, the high school’s athletic director talks about the issue of safety that involves a girls playing a male sport.

“I think the difficulty is whether it’s a girl playing a male’s sport, or a or male playing a girl’s sport, the first thing you’re concerned about is safety for the athletes,” Violante said. “Number two, is you worry about the locker room situations and changing, but if the girl is a good enough athlete to compete, then it’s okay.”

She has been playing her whole life and loves the sport enough to put herself out there on an all-boys’ team.

“My advice for a girl playing on an all-boys’ hockey team would be to do it,” Felicioli said. “It’s a lot of fun and girls that start playing with guys end up being the best in the girl’s hockey world. To have a combination of the two different game plays is really good in girl’s hockey.”