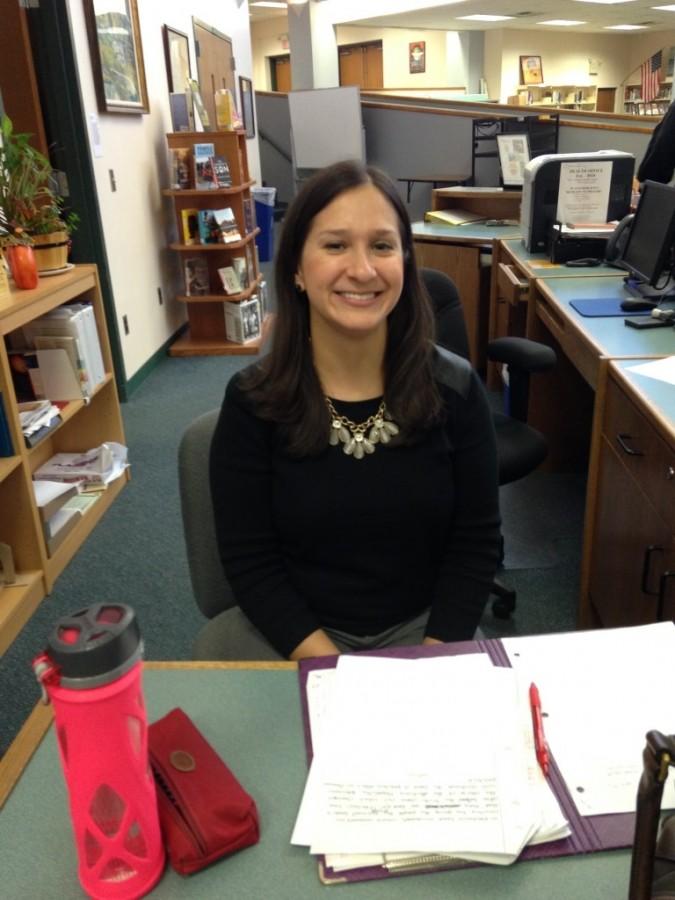 “A good teacher is like a candle- it consumes itself to light the way for others.”  — Anonymous

Can anyone identify what rhetorical device this quotation uses? Thanks to the teachings of Mrs. Jill Astoreca, I’m now able to easily identify this as a simile. A simile is one of the many rhetorical devices Mrs. Astoreca has taught me this year in English. Although the school year has merely begun, I know that Astoreca’s pure dedication to her career will allow her students to leave the classroom with copious amounts of knowledge.

Astoreca grew up in Marlboro, New Jersey. She studied at the Indiana University in Bloomington, Indiana where she majored in secondary education with a concentration in English. Astoreca’s original declared major was child psychology, but an experience in her senior year English class substantially impacted her; this is when she realized a career in English education was the career for her.

“When I was a senior in high school, I had already gotten into college fairly early, I thought that I wanted to be a child psychologist. But, my senior year English class was a double period, so it was two hours of English and half of the period was spent in groups,” she said. “We had to put together an entire unit plan and teach our peers for an entire month, so that’s when I realized it was something that I wanted to pursue in college. I changed my declared major from psychology to secondary education, English education.”

Astoreca is an English teacher at Glen Rock High School and has been for the past eleven years. Over these past eleven years, Astoreca has educated and inspired students in grades nine, ten, eleven, and twelve.

Although Astoreca no longer teaches English 11 Honors, her favorite memory of Glen Rock High School originates from the eleventh grade class that she instructed here.

“The first year I taught The Lords of Discipline in 2010 was a real standout moment in my career,” she recalled. “Mrs. Linda Tomas had given it to me as leisure reading my first year of teaching, but I was a bit nervous to teach it years later. Well, make no mistake, teaching that novel completely transformed my class. When I thought they’d struggle with the prose, or have difficulty discussing symbolism and themes, they inspired me with their thoughtful and insightful answers!”

Another experience that made this unit a unique and unforgettable experience was a personal phone call to Astoreca’s friend, a graduate of The Citadel, the military school that acts as the novel’s setting.

“Once we finished reading, we all had a phone conference with my friend Kevin, a graduate of The Citadel who was being deployed to Afghanistan the very next day. Each student asked him about his experience at The Citadel and how closely The Lords of Discipline resembled his alma mater,” she said. “My class loved talking to someone who went to military school, still served in the military, and who also loved The Lords of Discipline as much as they did.  On the day of the final exam, I walked into my classroom to see all my students dressed as the characters acting out a scene from the novel. This remarkable class never ceased to amaze me during the unit. The Lords of Discipline bonded us together.”

Today, though, Asotreca no longer teaches English 11 Honors, instead she devotes her time to establishing a program that did not previously exist.

The course is structured in terms of the different types of essays written throughout the year. The course is also divided into thematic units such as “language and education,” or “morals, ethics, and mortality.”

Astoreca prepares her students for the upcoming AP Exam in May by doing “practice multiple choice questions at various points in the year.” Astoreca hopes that by introducing her students to “all different types of nonfiction prose ranging from contemporary and classic, or even pre- nineteenth century” the students will be exposed to as much as possible.

Astoreca also elects to not to focus too much on the AP exam until closer to the exam date.

Although Astoreca has a small immediate family consisting of parents, a husband, parents in law and siblings in law, the English department functions as a secondary family.

“I could never imagine working with a more intelligent, supportive, or caring group of people than my friends in the English department. I know I wouldn’t be the teacher I am today without them,” she said. “They also happen to be a great source of entertainment. We are always laughing, sometimes in tears, and sometimes over the same jokes and stories we have told for many years.”

Fellow English teacher (of 33 years) and a dear friend of Astoreca, Ms. Patricia Mahoney also feels that “the English Department is an extremely close group of people.” Mahoney has known Astoreca since Astoreca graduated from college.

“We hired Mrs. Astoreca right out of college, so it has been immensely gratifying for me to watch her grow and develop as an educator over the years,” Mahoney said.

Many members of the English department, including Mahoney, attended Astoreca’s recent wedding, where they made “many, many happy memories” to share as a department.

Over the years that Astoreca and Mahoney have spent in the English department together, they developed a wonderful friendship.

“She is a great colleague and a dear friend,” Mahoney said. “Because I have known her since she first started teaching, I have taken immense pride in seeing the teacher and professional she has become. I feel like she’s almost family to me.”

Astoreca is currently the English teacher for three sections of English nine and two sections of AP English Language and Composition.

Liam Geduldig, a junior, is one of the few who has had the opportunity to have Astoreca as his ninth and eleventh grade English teacher.

Geduldig explained his impressions of how English class has changed between English nine and AP English.  “I thought she was very knowledgeable about everything that we were learning, and she had a good control over the classroom even though there were some students that were a bit rowdy and acted up.

“Because it was a class that was a regular class, where people of all different understandings were in the same class, she was able to control the different characters and personalities very well. As my junior year teacher I feel that the classroom runs very smoothly because we’re all in an AP class and the course load is very difficult, but she obviously has a great grasp of writing and is very helpful. There’s more of this facilitating discussion and helping us grow as students. ”

Similar to Geduldig’s impression of AP English, Astoreca feels that her AP English classes as a whole strive to fulfill their potential and become the best writer to their abilities.

“I do enjoy teaching the AP students. I think that once students become juniors they’re more in tune with what it means to be a student, how to study, how to ask questions, how to welcome other opinions. I think it’s something that we’ve even talked about in class and how to participate in a meaningful discussion,” she said. “For one, I firmly believe students should be able to write well to succeed, not just in school but in life. So by studying how other people do that well, hopefully that will transfer into their own writing. And again, not just writing for an exam, not just writing for a class or a course, but how to communicate and express themselves in their personal lives.”

Astoreca displays her passion for English, by initiating class discussions where all students are invited to share their opinions.

“I like that she’s easy going. She’s very inspirational, and I like how she really makes her students do better. She works her students to the best of their abilities and really prepares her students for college and the AP test,” said Victoria Messikian, a junior in Astoreca’s AP English and Language Composition class.

Although Astoreca is very dedicated to her students and career, there are many activities and hobbies Astoreca pursues outside of school.

“I really enjoy music. While I do not play any instruments successfully, I love to listen to music, and go to concerts and shows. That’s my other passion, just exploring different types of music; I have a really eclectic taste, so that’s something that I just really love,” she said. “I like to spend time with my friends and read when I can. Unfortunately, I have a bit of a TV watching habit. When I am not doing schoolwork, I love to catch up on my favorite TV shows, so I DVR a lot of programs.”

Her favorite authors include Tom Wolfe, Charles Bukowski, Bret Easton Ellis, and Wally Lamb. Her two favorite books growing up were “Jude the Obscure by Thomas Hardy and Adam Bede by George Eliot.”  She said that she “obsessed over these books in college” as they showed her “a mixture of romance, tragedy, and corruption in a place and time” that were so different to what she had read before.

Astoreca hopes that her students leave her class with the ability to write well and feel comfortable in a classroom to share ideas.

Astoreca’s favorite part about being an English teacher is “when you have a really good class discussion that’s based on reading or linked to students’ lives, when everyone tends to open up and share their ideas.