Print issue distributed just in the nick of time 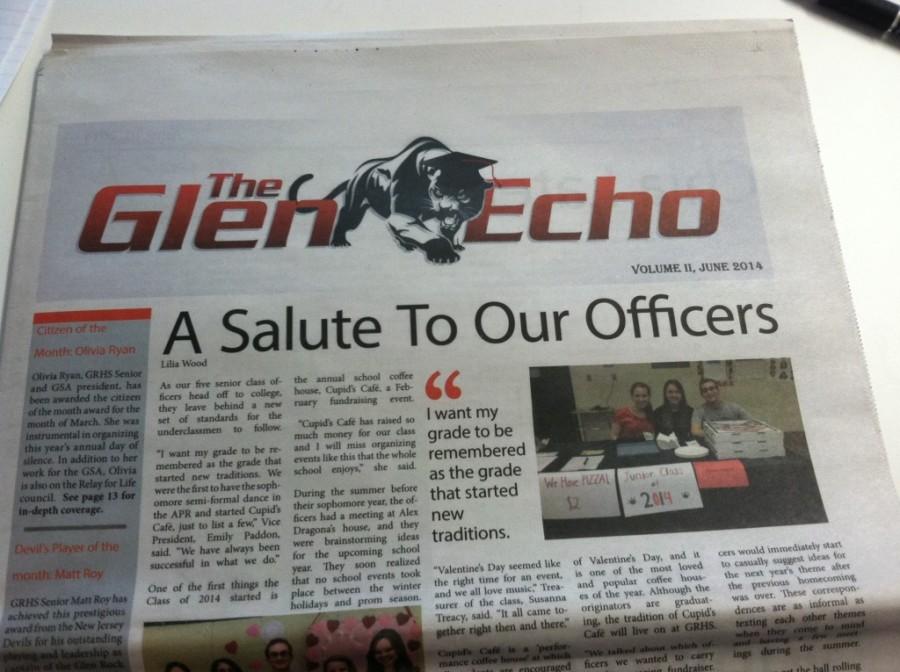 Released June 10th, 2014, the Senior Edition (also readable on this website) was received with great success.

“Please excuse students who take Journalism for newspaper distribution in the Hamilton Lobby,” the loudspeakers announced during ninth period, barely an hour after the papers arrived to the front door of the school and just in time.

Seven hundred The Glen Echo’s printed newspapers finally arrived on the seniors’ last day of school, which was only for seniors.

The Glen Rock High School student newspaper, The Glen Echo, was distributed at the last possible second on June 10th, 2014.

“I am very happy to have another successful release of the print edition of The Glen Echo,” said Mr. Toncic, GRHS English and Journalism teacher.

The content of this publication is dedicated to the Class of 2014 whose graduation is coming in less a week.

Mr. Toncic said, “The final issue is the senior-based issue. As the last paper publication of their GRHS career, we want to focus on the achievements of seniors throughout the year.”

The Senior Edition covers topics spanning from the achievements of the seniors (such as ‘beginning the annual school coffee house’ and ‘winning the homecoming hallway’) to cordial ‘Senior Advice to Freshmen,’ according to their four years experience in GRHS.

The Senior Issue 2014 also had a page, ‘Senior Legacies’, which gave an opportunity to seniors to write class legacies, bequeathing precious things that they leave behind to underclassman.

Nadia Fazal, graduating senior, said, “My favorite part is the superlative page, and I thought it was really funny that my brother came up to me asking why I got second place for ‘Most Likely to be a Hazard to Pedestrians.’”

Even after successfully publishing The Senior Issue 2014, The Glen Echo staff has not stopped yet.

As the printed version carried only a mere 5% of the content that The Glen Echo has, the other 95 percent of contents are available online.

Mr. Toncic encouraged students to check out the website frequently.  Then he added, “We try to update everyday — sometimes that’s hard to do — but we focus intently on having new content multiple times a week on our website.  There are no ‘issues’ anymore, we’re a rolling publication.”