Welcome to the Monthly Corby! This week, I sat down and interviewed Mr. Michael Corby, the legendary mathematics teacher. 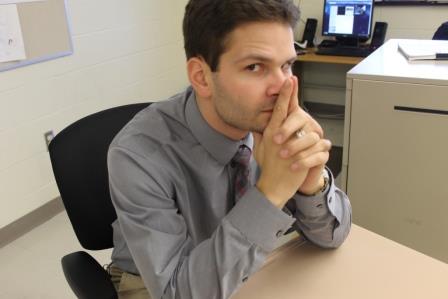 Michael Corby shows off his dashing gray shirt for the camera.

Francis Timothy Mountain: Hey, how’s everybody doing today? I’m here with my favorite math teacher ever, Mr. Corby. Mr. Corby, how are ‘ya, how was your weekend?

Mr. Michael Corby: I’m doing good. My weekend was good, a little snowy. Had to change some plans around, but it was good.

FTM: That’s okay, you know, the snow gets to us all, doesn’t it? So, my first question for you today is: Approximately how many hair follicles would you say exist on your body?

FTM: It does sound pretty low. I’d imagine you have about 2,400 just in your beard.

FTM: I agree. I’m an argyle man myself.  Anyway, how much do you miss having me as a student in your class?

MC: Words cannot express how much I miss having Tim Mountain in my class.

FTM: Aww, thanks, Mr. Corby. Words cannot express how much I miss having you as a teacher. Uhh, where do you live, and can you give me your address, phone number, personal email address, and social security number?

MC: I live in Fair Lawn, and that’s all I’m going to say about that matter.

FTM: Okay, sounds good. I don’t blame you. Is it true that you are currently employed in a covert division of the CIA which positions undercover math teachers in High Schools across the country?

MC: If I told you, unfortunately, whatever device the readers were reading this on would have to explode in 10 seconds.

FTM: Oh god. Alright. When was the last time that you wore mascara?

FTM: Thank you. Actually, that was a pretty good answer. Alright, hypothetical scenario: You are a physical education teacher at a public middle school in a small, suburban town in New Jersey. A student enters the gym with his shirt un-tucked. For how long do you reprimand the class on how important it is to tuck-in your shirt for gym?

FTM: Okay. I definitely agree. On a scale from 1-10, how annoying is when people incessantly say, “ain’t nobody got time for that?”

FTM: Oh, it annoys the hell outta me. Alright, hypothetical scenario: You are seated at Red Lobster with your “honey,” and when  the waiter comes to your table to bring you the menu, you notice that “crab” is not on the menu. Do you or do you not exit the restaurant immediately?

MC: Yes, I would get up and leave immediately.

FTM: Yeah, I would as well. Multiple Choice Question: Who was the first president of the United States of America?

FTM: Okay. If you attended Hogwarts School of Witchcraft and Wizardry, which house do you think you would be placed in by the Sorting Hat?

MC: Ooh, I actually had a conversation about this with somebody the other day, and we decided on Gryffindor.

FTM: Gryffindor, yeah. I feel like everybody wants to be in Gryffindor. Hypothetical scenario: You are walking home from a long Saturday at the gym, and some kid comes up to you and asks you: “Do you even lift?” despite you having just exited the gym, where you benched 800 lbs. with a singular arm. What is your response to the kid?

FTM: Okay. How was your Thanksgiving? Where did you spend it? What did you eat?

MC: It was good. I spent it with some of my family. I had turkey, ham, sweet potatoes, salad, some vegetables, stuffing, cranberry, and that’s about it.

FTM: Sounds great. What is your opinion on The White Stripes breaking up? …Two years ago.

MC: Uhh, I didn’t even know they broke up. So I guess that answers that question.

FTM: Okay, well, even though The White Stripes broke up, Jack White is still a part of The Raconteurs, in which he arguably has more potential, seeing as he is surrounded by more talented musicians. This is quite a contrast from Meg White, the former drummer of The White Stripes, who, in my opinion, was a mediocre drummer.  Do you have any comments on Jack White’s potential to use this side-project super-group as a vehicle for his immense musical capabilities?

MC: I think Jack White is a talented musician, and whatever group he is a part of, I think, enhances his abilities as a musician.

FTM: Thank you. Where is your favorite vacation spot?

FTM: I totally agree. I love my sofa. Please, right now, recite for me as many digits of pi as you can remember.

FTM: Okay, Mr. Corby. I will be verifying to make sure that that was correct. (VERIFIED: CORRECT)

(FTM:) Thank you, Mr. Corby, for the interview. Do you have any questions for me?