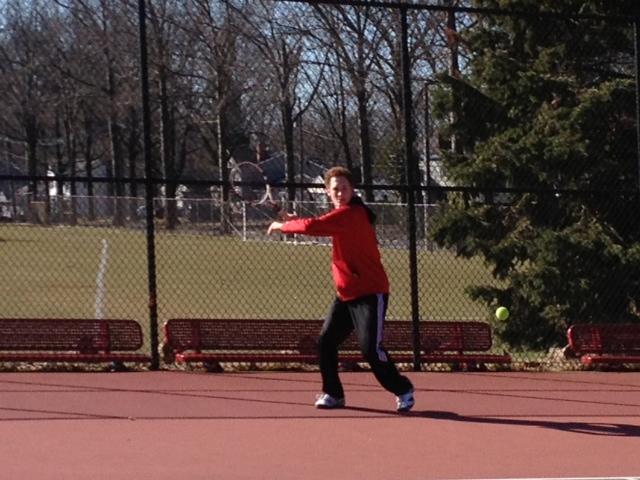 One year after recording an 8-4 record in their league (the NJIC Colonial Division) the Panthers are looking for a vast improvement. In fact, since day one, the goal for Coach Zimmermann and the Panthers was to come in first in the league.

“We still haven’t had county or state tournaments yet, but we are still undefeated in our league,” Coach Zimmermann said.

Even though there is still a long way to go in the season, the Panthers have accomplished their goals so far.

When Zimmermann was asked who can be credited for guiding the Panthers to a great first half of the season, she had plenty of players to thank.

“Senior Dean Sponholz has been very strong on the court. In addition to him, other seniors Dan Stein (second singles) and Patrick La Roux (doubles) have impressed,” said Zimmerman.

The seniors have been great, and along with multiple juniors and sophomores that have had great seasons, the drive to win is tremendous for the seniors this year.

“The seniors have progressed through the program and share in the success of the team this year and previous years.”

With this being their last year, and the goal of an undefeated season in the back of the seniors minds, there is no doubt that all of Glen Rock’s goals are achievable. A great second half of the year is about to occur for the Panthers, maybe even better than the first. As Coach Zimmermann said regarding the future success of the team, “they are getting stronger as the season progresses.”